1500 hp Nissan Qashqai-R up for grabs in raffle 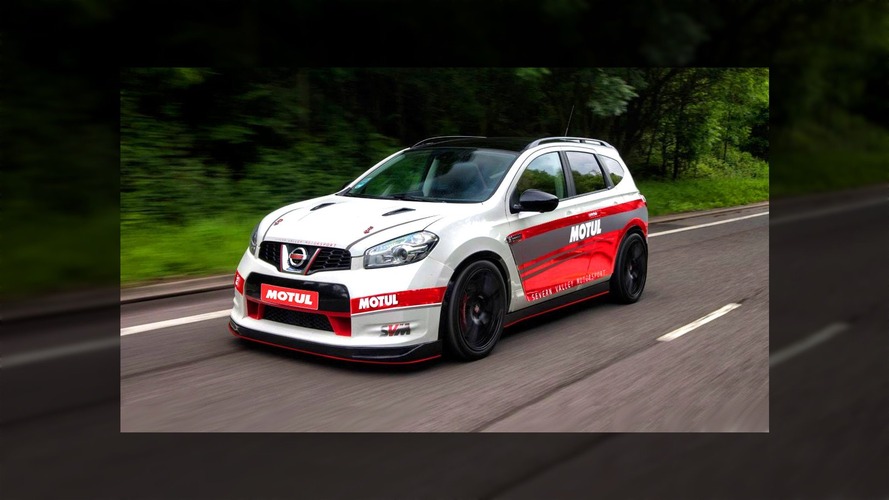 Severn Valley Motorsport's GT-R-powered monster could be yours.

In the Nissan Qashqai-R, British tuner Severn Valley Motorsport created one of the most insane cars on the planet.

It started life as a perfectly ordinary 2013 Nissan Qashqai+2 with a weedy 1.6-liter, 115 horsepower engine. But it didn’t stay that way for long. You see, SVM is among the most highly-regarded Nissan GT-R tuners in the world, and their plan was to mate the Qashqai’s body with a GT-R chassis.

But not just any GT-R chassis. One with the 3.8-liter, twin-turbo V6 engine tuned to the stratosphere. Virtually nothing was left stock, not even the cylinder blocks which were upgraded and strengthened to SVM’s own specs. Other upgrades include a pair of Garrett GT30 turbos, Carillo pistons and connecting rods, wild camshafts, and even Bugatti Veyron fuel pumps.

The result is a truly astonishing 1500 horsepower (1119 kilowatts), which translates to a quarter-mile time of 9.1 seconds at 162 miles-per-hour (261 kilometers-per-hour), and a ludicrous top speed of 222 mph (357 km/h) over a measured mile. You can watch videos of both of those runs below.

Perhaps most astonishingly, the Qashqai-R remains completely road legal, at least in the UK. I can’t imagine any other country in the world would be so crazy as to let a car this unhinged out in public. Certainly not the U.S.

SVM says the build of the Qashqai-R cost many hundreds of thousands of pounds. But it’s now possible to buy it for as little as £10 ($13.36). Because the company has decided, unbelievably, to give the thing away in a raffle. (A triple entry costs £25 - $33.39.)

Anyone from anywhere in the world can enter, but you do have to pick it up from SVM’s shop in Telford, England. And have it insured when you do which will be, erm, expensive. Anyway, it’s a small price to pay for the chance to own one of the most amazing tuner cars there has ever been.