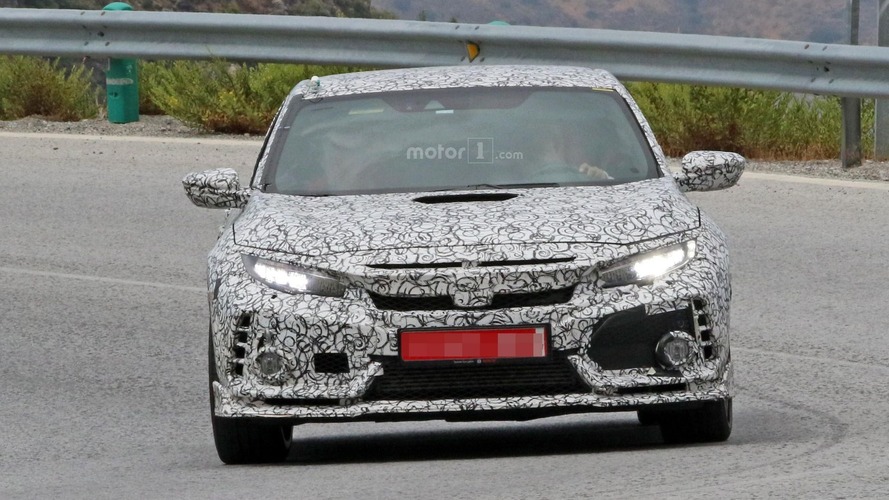 The U.S.-bound powered-up hatch has large air vents up front, triple exhaust tips at the back.

The current Type R has been around for a little over a year now, but with Honda already selling an all-new Civic, it also must prepare the next iteration of the range-topping model. Last time we saw a prototype of the next-gen Civic Type R it was going hard on the Nürburgring, while this time around the camouflaged test vehicle was spotted on the public roads of Spain.

Compared to the previous batch of spy images, the new set is a bit more revealing as it’s showing the prototype with a hood scoop and a new front bumper hosting a pair of massive air vents and vertical louvres. At the back, there’s a massive wing which is different than the one Honda has developed for the current Civic Type R. Those Ferrari 458 Italia-styled triple exhaust tips mounted in the center are still there and we are curious to find out whether these will make it to the production car.

It’s unclear at this point what sort of engine the new hot-hatch will use, although reports are indicating the new model will be motivated by an evolution of the current turbocharged 2.0-liter, four-cylinder unit. It has 305 horsepower (228 kilowatts) and 295 pound-feet (400 Newton-meters) of torque right now, but Honda’s engineers will likely massage the motor to squeeze more power. That being said, we are not expecting a major bump in output if the next Civic Type R will continue to be a front-wheel-drive car.

It will be interesting to see whether Honda will attempt to regain the record for the fastest FWD car at the ‘Ring. The outgoing model managed to smash the record last year with a time of 7 minutes and 50.63 seconds, but the 310-hp VW Golf GTI Clubsport S is now the record holder with a 7:49.21 performance.

If the next installment of the Civic Type R will make the switch to an AWD setup, it might gain substantially more power to battle the all-paw Ford Focus RS which is expected to spawn a 400-hp RS500 limited edition in 2017.

Honda has already announced the Civic Type R will be introduced in U.S. next year, likely as a 2018MY. A warm Type S version with an upgraded 1.5-liter turbo is expected to join the family at some point in the future. Until then, the production-ready Civic hatchback will go on sale this fall in North America ahead of an European market launch pinned for early next year.