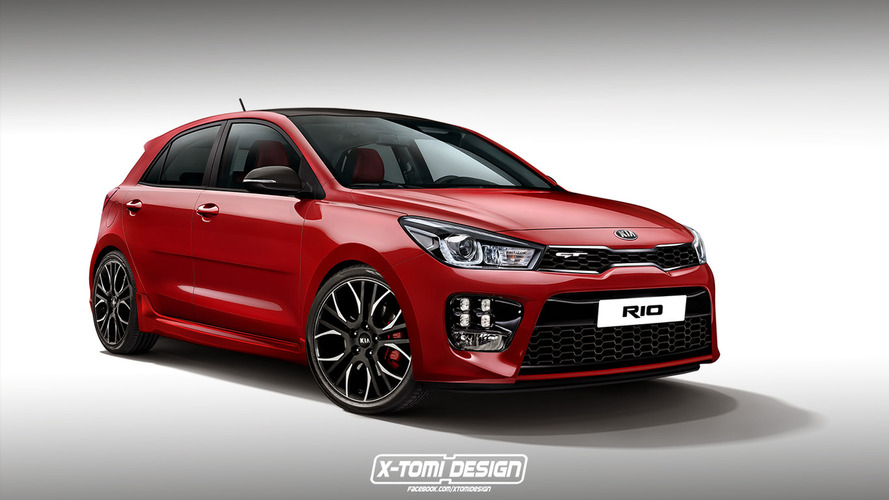 The fourth-gen Rio is the next model in line to receive the GT treatment.

Kia unveiled the all-new Rio only a few days ago, but already we have a speculative render of how the performance-oriented GT might look like. The hotter derivative has already received the company’s stamp of approval so we know for sure it’s in the product pipeline. Kia has been selling a cee’d GT for years, so X-Tomi Design has decided to try and see into the future by taking the compact hot-hatch’s sporty bits and slapping them onto the smaller Rio GT.

Set to battle the next VW Polo GTI and Ford Fiesta ST, the first-ever Rio GT will be based on the recently introduced fourth generation of the supermini which has grown in size and now looks more upmarket both inside and out. The GT version is all set to receive a more aggressive body with beefier bumpers and the now familiar four-point LED daytime running lights. It should be mentioned the so-called ‘ice cube’ lights are also available on Kia’s GT Line models which are similar in looks with the full-blown GTs, but are being offered with the regular engines.

Those chunky two-tone wheels are actually borrowed from the cee’d GT where the alloys measure 18 inches and are backed by 16-inch brake discs with red calipers that have also been carried over for the Rio GT’s virtual treatment. Expect the hot B-segment model from Kia to receive dual oval exhaust tips as well as a stiffer suspension setup bringing a lowered ride height to make the feisty supermini more agile in the corners.

It remains a mystery what will Kia’s engineers install in the engine bay, although reports say it might be a de-tuned version of the turbocharged 1.6-liter engine. In the aforementioned cee’d GT, it delivers 200 horsepower, but it is believed in the Rio GT it will generate 180 hp. That seems a tad weak since the outgoing Polo GTI already has 192 hp and it might receive even more ponies in its next iteration. It’s the same story with the Fiesta ST which in flagship ST200 guise has 200 hp on tap and it could become even stronger in the new generation. That being said, the ace up the Rio GT’s sleeve will be the more attainable starting price, as it’s the case with the cee’d GT which undercuts the Golf GTI and Focus ST.

With the regular new Rio (pictured above) about to receive its public debut in Paris at the end of the month, we shouldn’t be expecting the GT model before the end of 2017 or early 2018.