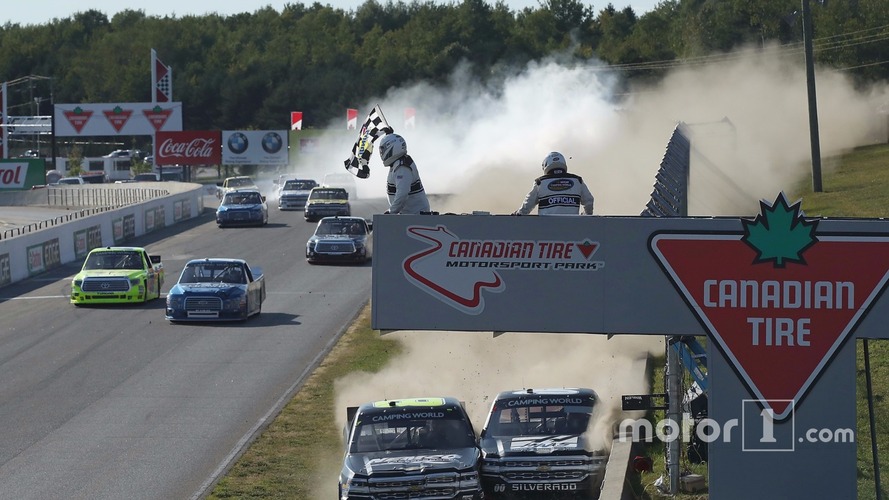 John Hunter Nemechek gave all he had to win the Silverado 250 at Canadian Tire Motorsport Park.

And that included nudging Cole Custer out of the lead for the victory on Sunday in the Camping World Truck race.

“I caught the 00 there,” Nemechek said of Custer’s truck. “We didn’t wreck him for the win, rubbing is racing.”

Nemechek led 19 laps before NASCAR declared Custer the leader prior to the sixth and final restart which sent the race into overtime. The young guns lined up alongside each other and Nemechek spun his tires to give Custer a considerable lead.

Nemechek, 19, dropped to third as Gallagher passed him. He regained his step, moved up to second and set his sights on Custer. On the final lap, Nemechek closed in on Custer and used his bumper on the No. 00 truck in Turn 9. As the two trucks came down the front stretch, Nemechek nudged Custer into the grass against the wall and both ran side-by-side with the No. 8 finishing just inches ahead.

Getting physical after the race

Before NASCAR declared a winner, Nemechek went to the flag stand to receive the checkers. Custer made a bee line for the driver of the No. 8 and tackled him on the grass. The teenagers scuffled until they were pulled apart.

“We had a real fast truck,” said Custer, who finished second. “He hit me coming to the second to the last corner — then hit me again and that sent me into the grass and he just drove me up into the fence. I was expecting it — kind of — because he’s raced a lot of people like that but it’s a shame. It was a great opportunity for us to get into the Chase — and he took it away from us.

“It’s going to be a rough year for him.”

Custer led the first 30 laps. He pitted when the race returned to green on Lap 31 following the the second caution (competition). Hemric inherited the lead but pitted on the next lap with Cindric. Crafton took over for four laps before pitting with Christopher Bell and Ryan Truex on Lap 35. Nemechek, who last pitted on Lap 27, moved to the point.

Nemechek had extended his lead to three seconds over Tyler Reddick when NASCAR called the third caution for competition on Lap 43. Gallagher, Kaz Grala, Custer, Cindric, Crafton, Johnny Sauter, Hemric and William Byron were running in the top 10 when the caution flag fell.

With 17 laps remaining, Gallagher ran into the back of Reddick and both trucks became loose, that allowed Custer to pass both drivers on the outside in Turn 8 for second place.

The fourth caution erupted when Rico Abreu tagged the back of Cameron Hayley’s truck. Truex, Gary Klutt and last week’s winner Brett Moffitt were involved in the incident.

“Just racing for position,” Abreu said. “I feel really bad. I wheeled hop really bad and it was just out my control. I hit Cameron in the right rear. I’m trying really hard. I tried too hard. I don’t know what to say I just feel terrible.”

Nemechek led the field to green with Custer, Gallagher, Cindric, Hemric and Crafton in tow. The fifth caution fell with eight laps remaining when Kaz Grala spun into the wall while running seventh. Former truck champion Travis Kvapil’s vehicle stalled to bring out the sixth and final caution on Lap 61, which forced the race into overtime.

Custer had the lead for the first attempt at a grreen-white-checker. Although Nemechek wobbled on the restart, he regained the position then battled Custer for the lead and the win in the final turn for his second win of the season and the third of his career.

“If I had been in the same spot, he would have done the same thing to get a win,” Nemechek added. “You have to do everything you can here to get a win.

“I can’t thank my guys enough. They worked their butts off. We didn’t qualify the way we wanted to yesterday. I made a mistake on my lap and didn’t make it to the second round. But I can’t thank these guys enough.”