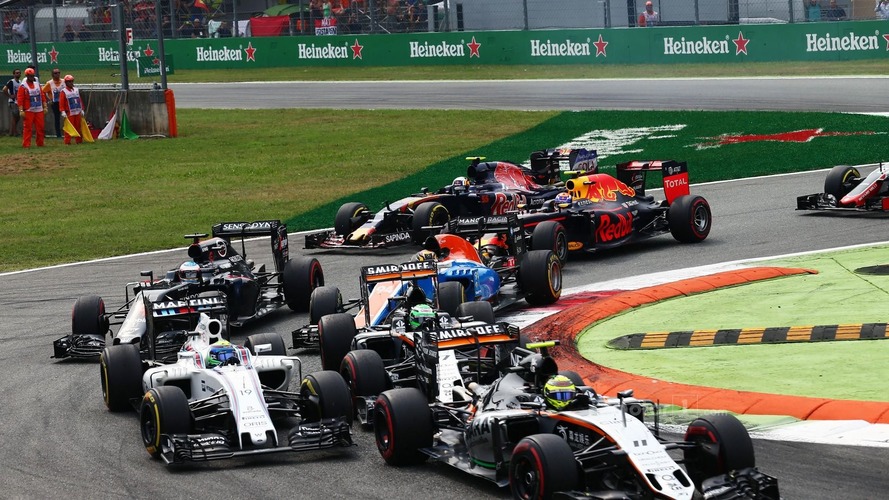 The race at the legendary Monza circuit comes to an end. Here are the results.

Nico Rosberg dominated the Italian Grand Prix at Monza, after being handed a huge advantage when poleman Lewis Hamilton suffered a poor start and dropped to fifth on the opening lap.

Nico Rosberg dominated the Italian Grand Prix at Monza, and was handed a gift when poleman Lewis Hamilton suffered a poor start and dropped to fifth on the opening lap.

Hamilton was chasing his third Monza victory on the trot, but his chances evaporated at the start as he was passed by Ferrari’s Sebastian Vettel and Kimi Raikkonen, the Williams of Valtteri Bottas and Daniel Ricciardo’s Red Bullbefore the first chicane.

Hamilton’s World Championship lead has shrank to two points over Rosberg, who won by 15s, as a result.

Vettel and Raikkonen trailed home in third and fourth over 20s behind the Mercedes duo, with the best fight of the race being between Bottas and Ricciardo for fifth.

Ricciardo made the position his own with a superb outbraking move in the closing stages, aided by a strategic masterstroke of running a short final stint on supersofts.

Story of the race

From pole position, Hamilton bogged down badly and Rosberg led a fast-starting Vettel to Turn 1. Raikkonen took third ahead of Bottas, Ricciardo and Hamilton.

Max Verstappen also made a poor start, dropping to 12th but passing Pascal Werhlein’s Manor on the opening lap.

Riccardo held off Hamilton’s first attack at Turn 1, but couldn’t resist him through Curva Grande and the Mercedes took his fifth place.

Hamilton then caught Bottas on lap four, but couldn’t ease past the Mercedes-powered Williams like he did to the TAG[Renault]-engined Red Bull. It took until lap 10 for him to be able to make it past, using DRS on the start/finish straight. By this time he was 11s behind leader Rosberg, and said “rears are pretty wasted already” – and fell back as far as 15s over the opening stint.

Rosberg was 2s clear of Vettel by lap five, with Raikkonen hanging on to his teammate’s pace despite complaining of vibration under braking. Raikkonen was asked to cool his car by falling back from Vettel, but he argued: “I cannot slow down or I’ll lose the tow.”

Bottas was the first of the leaders to stop on lap 14 for softs. The Mercedes duo started on soft tyres, so were able to run 1-2 as the supersoft-shodFerraris were forced to stop earlier: Raikkonen on lap 16 and Vettel a lap later – both taking more supersofts.

Rosberg stopped for mediums at the end of lap 23, Hamilton having closed the gap to 11s. Hamilton pitted a lap later, also for mediums, and dropped back to fourth behind the Ferraris.

Rosberg unleashed a 1m26.599s on his first flying, despite using the hardest tyre available. Hamilton answered with a 1m26.303s, trimming Rosberg’s lead over him to under 11s.

Bottas took another set of softs on lap 30 as Ricciardo was closing in on him at the end of his second stint.

Vettel pitted again on lap 33, with Raikkonen stopping a lap after him this time. The gap between the Mercedes was out to 11s again by this point.

Hamilton locked up and took to the escape road at the first chicane on lap 40.

Ricciardo ran long on his second stint, to allow him to rejoin on supersofts. He rejoined 4s behind Bottas, but caught him quickly and pulled off a phenomenal outbraking move for fifth at Turn 1 from a very long way back.

After his poor opening lap, Verstappen worked his way up to McLaren’s Fernando Alonso – passing him on lap eight for ninth place, helped by Alonso running wide at the Parabolica.

He later passed Perez for seventh on lap 49 with a bold move at the second chicane, Perez bailing out down the escape road and finishing eighth.

Massa started on the soft and jumped up to eighth from 11th after an ambitious lunge at the first corner paid off. But, like Bottas with Ricciardo, he couldn’t keep Verstappen behind and had to settle for ninth.

Nico Hulkenberg was 10th for Force India, ahead of Haas’s Romain Grosjean.

Jenson Button passed McLaren teammate Alonso with eight laps to go. Alonso was delayed in his first pitstop when the green light didn’t work after his tyre change: “Traffic light didn’t work man, [bleeping] traffic light.” He also complained later of tyre blistering, and even laughed at his engineer in the closing stages as he pitted with just three laps remaining.

Esteban Gutierrez almost stalled at the start, throwing away all his good work of qualifying in the top 10. He could only recover to finish 13th, ahead of Alonso.

Carlos Sainz was 15th for Toro Rosso, whose teammate Daniil Kvyat was forced to retire with the technical issue.

GP2 sparring partners of old Felipe Nasr and Jolyon Palmer collided on the exit of Turn 1 on lap two, the Sauber being punted into a spin. Both were forced to retire as a result of the impact, and Nasr was judged to be at fault for the move but rejoined to take a 10s penalty to avoid a grid drop in the next race.

“He ran me off the road, there’s better racing in GP2 and GP3,” slammed Palmer. “He should be given a grid penalty.”

The other retirement was Manor’s Werhlein, who was told to “stop the car immediately and switch off” on lap 28.