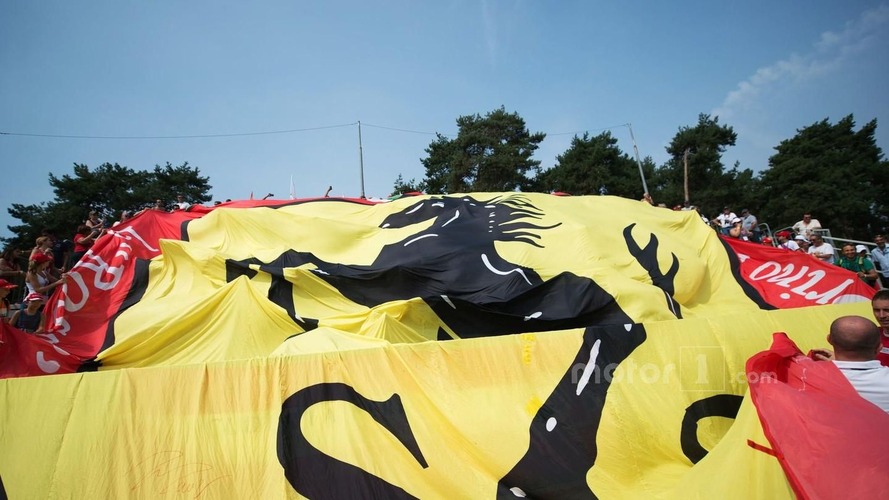 Saturday's qualifying session for the 2016 F1 Italian GP comes to an end. Here are the results.

Lewis Hamilton will start the Italian Grand Prix from pole position after outpacing his Mercedes teammate Nico Rosberg by almost half a second.

Rosberg was on a run of three consecutive poles, but Hamilton scored his seventh pole of 2016, his third consecutive pole at the Italian GP venue and his fifth career top spot at Monza.

The only cloud on Hamilton's horizon is a flatspot on the set of soft tyres he will start the race on.

Story of the session

Rosberg set the benchmark in Q3 with a lap of 1m21.646s, but suffered a scruffy exit of the Roggia chicane, which meant Hamilton was well clear with his 1m21.358s opener.

Raikkonen was third after the first runs, ahead of Vettel by almost three tenths, with Valtteri Bottas fifth for Williams ahead of Red Bull's Daniel Ricciardo, who was a tenth up on teammate Max Verstappen.

Vettel snatched third from Raikkonen at his second attempt, eight tenths off Hamilton, with Bottas staying fifth, ahead of Ricciardo, Verstappen and the Force Indias of Sergio Perez and Nico Hulkenberg.

In Haas's first-ever Q3 appearance, Esteban Gutierrez suffered an off at Lesmo 2 on his opening effort. He will start 10th.

Massa out of Q2, Werhlein stars

On the weekend of the announcement of his impending retirement from F1, Felipe Massa was knocked out of the top-10 shootout by Hulkenberg by just 0.016s.

Haas's Romain Grosjean set the 12th fastest time, but will start 17th due to a five-place grid penalty for an engine change.

That promotes McLaren's Fernando Alonso to 12th, who complained "I didn't feel the power – losing on the straights, unfortunately".

Pascal Werhlein was an impressive 14th fastest, which will be 13th on the grid for Manor, ahead of McLaren's Jenson Button and Carlos Sainz of Toro Rosso.

Hamilton was on top in this session with a 1m21.498s on soft tyres, gaining three tenths on Rosberg in the final sector alone, but locked up on his flying lap on the set of tyres he's destined to start the race on.

That forced him to run again on a new set of softs, but failed to improve – which forces him to start on a set that has a flatspot. He said: "I've got a small flat spot on this right-front."

Like Mercedes, the Red Bulls also ran the soft tyres on their first runs which put Verstappen and Ricciardo ninth and 10th – but with a half-second advantage. However, they bailed out of that gamble and ran supersofts for their second attempts.

A great lap from Werhlein saw him safely through to Q2, which put Alonso under pressure on the bubble.

Sauber's Felipe Nasr will start 18th, rueing "that misfire cost us a shot", but was still a tenth faster than teammate Marcus Ericsson.

Jolyon Palmer was the fastest Renault in 20th, complaining about a lack of straightline speed, but two tenths off the Saubers. His teammate Magnussen, in a new chassis after his massive shunt at Spa last Sunday, ran wide through the gravel on the exit of Ascari on his final attempt.

Manor's Esteban Ocon failed to complete a lap, pulling off at the first corner with an electrical failure. "I'm stopped at Turn 1," he confirmed.