The Varsovia Concept could be the first mermaid-inspired luxury sedan

The hybrid unit offers a claimed range of around 528 miles.

The Varsovia Motor Company from Poland aims to join the burgeoning low emissions luxury sedan market with the Varsovia Concept. The boutique automaker promises a real-world debut during an upcoming international auto show. However, the boxy sedan’s future is far from certain because the small firm admits that it needs a positive reception from potential buyers before production could commence. Assuming everything goes to plan, the firm would build a 50-unit run of the high-tech four-door sometime after 2018.

Varsovia offers few details about the concept’s powertrain. It runs on electricity but an internal combustion engine acts as a generator for charging the batteries. The company claims a fully electric range of 217.5 miles (350 kilometers) or 528 miles (850 km) with the help of a full tank of fuel. Acceleration to 62 mph (100 kph) would take less than five seconds.

The Varsovia Concept’s traditional three-box shape comes from the Kadler design studio, which is near Warsaw, Poland. The stylists took inspiration from the mermaid on the city’s coat of arms by embossing portions of the front fenders and doors, which gives the look of scales. The mythical creature also has a stylized depiction on the hood ornament. 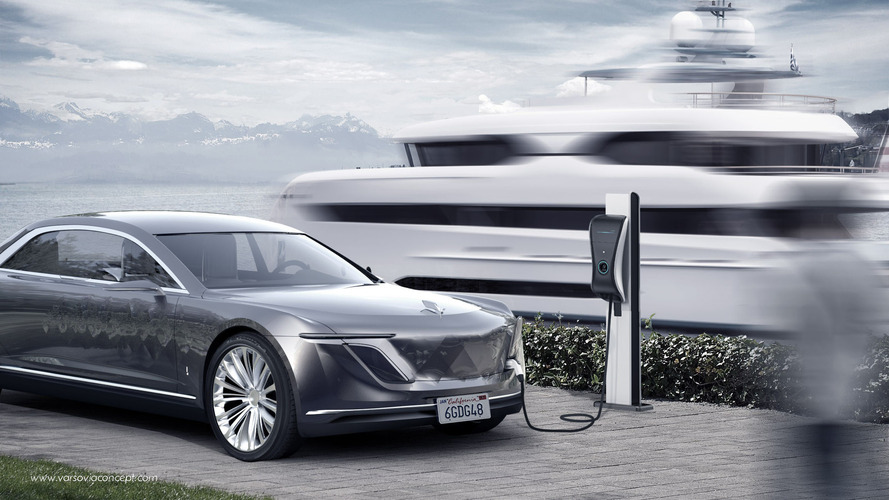 Inside, the concept’s layout caters to rear seat occupants. Instead of a front passenger seat, a pair of 19-inch transparent displays can fold down from the roof. The vehicle features an onboard computer and satellite Internet connection, which makes work easy from the road. There’s also a built-in keyboard and mouse in the back.

People can’t work all the time, and the Varsovia’s rear seats offer the ultimate in relaxation. They feature nine sections that each have separate settings for cooling, heating, firmness, and massage functions. The company even claims the tech automatically adapts to an occupant’s size and weight. 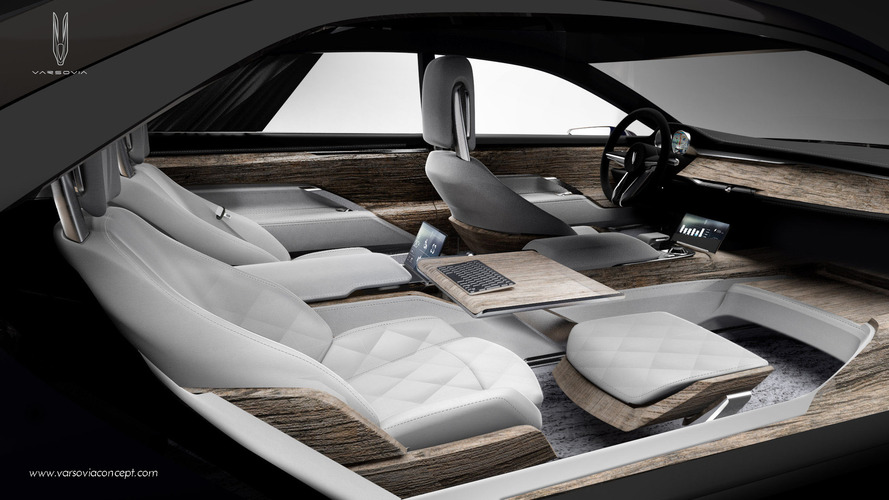 If the concept actually sees production, Varsovia would offer customers ample room for customization. Buyers could request any non-standard equipment, work with designers to create unique wheels, and pick the exact layout of the multimedia system. Unless the boxy sedan garners enough interest, none of that would ever happen, though.

Varsovia Motor Company sp. z o.o. have the pleasure of presenting a concept vehicle named “Varsovia”. Designed by the Kadler design studio situated near Warsaw, it presents a new level of design and luxury, which cannot be offered by any other vehicle available on the market.

The name of the car is directly derived from the birthplace of the concept – the capital city of Poland, Warsaw, one of the most dynamically developing capitals in the world. The presented concept signals a production version of the vehicle, of which only a strictly limited number will be made.

For the creators of Varsovia the basis for luxury and beauty is primarily minimalism and harmony. These features became a priority during the designing of the car – the overall proportion and mass took a simple, classical form, deprived of any unnecessary elements. In a similar way, the inside, described by a few dominant lines enriched by a functional detail, is characterized by refined simplicity and elegance.
An important aspect which affected the shape of Varsovia was its origin. The main symbol of the car is beautiful Sawa, a legendary mermaid depicted on Warsaw’s coat of arms – she is reflected in the statuette on the bonnet, the scales from her tail are visible in the form of characteristic embossing both outside and inside the vehicle.

A NEW LEVEL OF LUXURY

The main aim which motivated the originators and designers was to create an exclusive car, whose functionality and equipment clearly exceeded the offer of other producers. Varsovia broadens the definition of a luxury vehicle, being not only a wonderfully made and equipped means of communication, but also a comfortable place for work, entertainment and relaxation.

The meeting of the main principles was started with the reorganisation of the seat arrangement in the cabin. The lack of the front passenger’s seat allowed to create additional space and to make it more convenient for one of the back passengers. That permitted the designers to make a priority seat with a unique space and facilitated access, thanks to a large door which opens upwards.
A MOBILE OFFICE

A significant aspect in the designing process of Varsovia was to provide the users with an exclusive workplace which would allow them to fulfil their work-related duties when travelling.

The basis for the functioning of a mobile office is an extended audio-video system, together with a built- in computer and an advanced information system. It can pair with all the mobile and computer devices on board, and enable to work remotely without them, without having to take them out of a bag or pocket; a superfast access to satellite Internet allows to communicate from every corner of the world. The data and functions of the system are shown on two large 19-inch transparent displays, which – when folded – integrate with the glass roof of the vehicle and become completely non-invasive. Thanks to the use of innovative matrices the turned off displays are 90% transparent – when they are folded, they function as a roof window, but they can simultaneously show any given images, e.g. they can imitate a view of a night sky during the day; when they are unfolded, they create a double panoramic screen with a record diagonal of 38 inches. The operation of the equipment is possible thanks to a built-in tablet, keyboard and mouse. In addition, passengers have folded tables with a special mechanism for the stabilisation of level at their disposal.

Such an extended system makes it possible to easily use all the applications and programs installed in the personal computer or phone, as well as to hold teleconferences or use the Internet or TV. All these elements combined with a comfortable seat, quality of materials and sound-insulated interior take the mobile work to a whole new level.

In order to ensure the best possible experience of comfort during the journey, the vehicle offers an extended spa system, which integrates the functions of a luxury seat, lighting system and audio-video system. The seat, developed from the scratch, consists of 9 independent elements with multifaceted calibration – each of them is equipped with a separate system for cooling, heating, massage and regulation of hardness. Thanks to an extended system of sensors the seat can adapt to user’s build and weight on its own.

However, the biggest innovation is the function of automatic recognising of passenger’s emotional state. The system, which is based on the number of sensors and a camera, recognizes passenger’s pulse and assesses if they are tired or excited in the given moment. This opens the way to automatic selection of many functions, e.g. favourite music, intensity and colour of lighting or hardness of the seat according to preferences pre-defined by the user, ensuring maximum comfort. In this way, Varsovia is the first vehicle in history which can automatically adapt to passengers’ mood.

Advanced AV equipment, consisting of two 19” screens, internal computer and high-end sound gear, provides users with new experiences in the field of entertainment during the journey. Watching a film, TV or listening to music on the board of Varsovia reminds more of a visit to the cinema or a concert hall than of a journey. The operation of the entire on-board equipment is possible from the level of an extractable tablet, which also functions remotely, e.g. when it is necessary to program and set it before the journey begins.
TOP-QUALITY MATERIALS
The basic motto of luxury is quality. This was also the key word during the designing and matching the materials inside the vehicle. The whole interior is made of top-quality natural materials – wood, leather, aluminium, silver or mineral rocks. No element inside the car is made of plastic, which not only increases passengers’ comfort, but also reduces the troublesomeness of the vehicle for the environment, both at the stage of its construction and utilization. Passengers’ health is an exceedingly important aspect, that is why the parts that have the most contact with passengers’ hands are made of antiseptic material, which minimises the growth of bacteria and microorganisms. In addition, the materials that are most exposed to pollution, such as carpets or leather surfaces, have hydrophobic properties, which prevents the dirt from settling.

According to the creators’ philosophy, a luxury vehicle has to fit every client directly, just like a glove. One of the most important principles of the Varsovia concept is the fact that the buyer can significantly affect the shape of the vehicle – a team of designers will be able to meet almost every demand of the client, from the creation of an individual design of rims, through the installation of a non- standard equipment, to the use of individually selected finishing materials. Additionally, such elements as the layout of the multimedia system are designed individually according to buyer’s needs, in such a way that they are as intuitive and user-friendly as possible. If necessary, the car can be armoured with the application of the highest VIP B7 level standards.

In this way every produced Varsovia will literally be one of a kind.

An extremely important aim of the project was to develop the drive and technology which would allow to maintain full functionality with simultaneous reduction of the negative effect on the environment. This concerns both the applied drive and the materials of which individual sub-assemblies of the vehicle are made.

Varsovia is equipped with a hybrid engine with serial configuration. Unlike classic hybrid vehicles, here the drive is transmitted to the axle from electrical engines, and a small combustion unit installed on board serves as a generator which feeds the batteries built into the floor in case they are discharged. Such a drive enables a fully ecological use of the car in everyday conditions – when the current is supplied from an external charging station, the use of a combustion unit is not necessary. In case of a need for a longer journey with a discharged battery, the vehicle can continue by producing electric energy out of conventional fuel. This eliminates the biggest flaw of fully electric cars, i.e. the need for long-lasting charging of batteries, while maintaining their biggest merit – the possibility of fully ecological ride in everyday conditions. The purpose of electric engines as the basic prime mover, apart from full functionality and minimisation of the emission of harmful substances to the atmosphere, also provides full comfort – it reduces the number of sounds generated by the vehicle to a minimum.

The fulfilment of the described technical principles requires actions aiming at the maximum reduction of the weight of the car. The entire plating of the body and a part of construction elements will be made of composite material, and in order to ensure the lowest possible negative effect on the environment, the composites will be based on natural, biodegradable fibres. The predicted weight of the vehicle will be
little over 2000 kg. The acceleration from 0 to 100 km/h will drop below 5 seconds, and maximum speed will significantly exceed 200 km/h.

The firm will present a full-size prototype of the vehicle during one of international car shows. If it is received positively by potential buyers, the planned low-volume production will begin after 2018, and maximum 50 cars a year will be produced.

Varsovia Motor Company Sp. z o.o. is a special purpose entity established for the execution of the Varsovia project by a group of experienced businessmen and designers. The Varsovia creators’ team gathers professionals from various fields, among others industrial design and transport designers, engineers and journalists. Their clearly defined aims, determined by the company founders, include the construction of a full-size prototype of the car and its presentation in public, as well as implementation of a strictly limited production of the vehicle in the next few years.