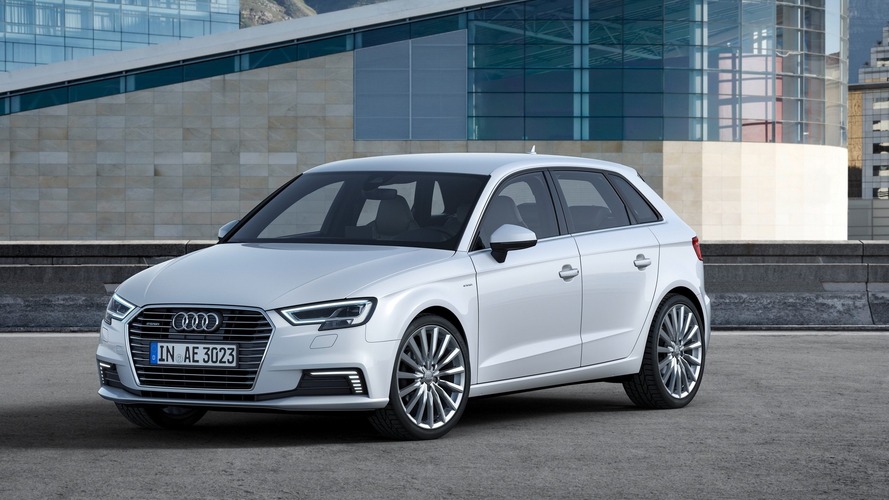 Audi of America introduced the facelifted A3 and S3 about three weeks ago and now the conventionally-powered models are welcoming the frugal A3 Sportback e-tron which has basically the same updates. It gets the already familiar A4-like front fascia and several subtle styling tweaks as you would expect from a mid-cycle refresh of a VAG product.

If you’re a big fan of technology, you’ll be happy to hear the plug-in hybrid A3 Sportback will be available from the 2017 model year onwards with the super nice Audi Virtual Cockpit. The 12.3-inch entirely digital instrument cluster is a tad different on the e-tron model because it also displays hybrid-related information such as the consumption figures for gasoline and electricity, as well as the remaining range for both.

Audi is being more generous by offering more standard equipment than before, including a rearview camera, panoramic sunroof, along with LED daytime running lights, and the e-tron-specific LED headlights if you opt for the Premium Plus or Prestige. On the safety front, all A3 e-tron models are going to come as standard with driver assistance systems like Audi pre sense basic and Audi pre sense front.

There’s even more tech on board, with goodies such as the Audi smartphone interface providing support for both Android Auto and Apple CarPlay integration to fulfill all of your connectivity needs. On top of that, Audi connect PRIME and PLUS services are also part of the package and come with a six-month trial subscription, while the MMI Navigation with MMI touch infotainment system has been updated to the latest version.

The mild facelift also brings an optional Sport Package which adds an S line roof-mounted spoiler, 18-inch Turbine-styled alloy wheels with a 15-spoke design and paired with all-season tires. On the inside, the 2017 A3 Sportback e-tron with the newly added pack receives front sport seats and a flat-bottomed three-spoke steering wheel with shift paddles.

There are not any changes hardware-wise, so the plug-in hybrid five-door hatch soldiers on with a turbocharged 1.4-liter TFSI gasoline engine teamed up with an electric motor for a combined 204 horsepower (152 kilowatts) and 258 pound-feet (350 Newton-meters) of torque. It’s enough hybrid punch to grant the premium compact model with a sprint from 0 to 60 mph (96 kph) in a decent 7.6 seconds.

The most affordable version money can buy would have to be the entry-level Premium trim which begins at $38,900, followed by the mid-range Premium Plus at $42,000, and the range-topping Prestige that will set you back $47,550. All prices exclude the $950 destination fees and do not take into account any available incentives and tax credits.

Be sure to check out our review of the 2016MY in U.S. specification here.

Audi of America’s refreshed A3 Sportback e-tron is poised to continue to bring new owners to the electric plug-in hybrid family. The compact vehicle in the A3 model-line combines performance with impressive efficiency, and now offers even more technology, for a premium driving experience that is truly Audi.

The A3 Sportback e-tron continues to be a success for Audi, with nearly 13 percent of all A3 sales being comprised of e-tron sales. As the brand’s first step towards providing an electrified future in the U.S., the e-tron offers a versatile choice for the full array of daily commuting challenges, some of which can be handled on battery power alone.

2017 A3 Sportback e-tron
Combining the benefits of a hybrid with all-electric range, the A3 Sportback e-tron continues to feature a 1.4-liter TFSI® engine and a permanent magnet-driven electric motor to produce 204 horsepower and 258 lb-ft of torque. With impressive off-the-line acceleration, the e-tron sprints from 0-60 mph in just 7.6 seconds.

As the only Audi available in a Sportback model and with more than 43.5 cubic feet of cargo capacity with the rear seats folded down, the A3 e-tron offers customers a premium driving experience with every day utility. New for 2017, the e-tron comes equipped with even more standard features including panoramic sunroof, rearview camera, LED daytime running lights with available e-tron signature LED headlights (Premium Plus and Prestige only) and standard driver assistance systems such as Audi pre sense basic and Audi pre sense front.

Expanded technology offerings include the available Audi virtual cockpit, Audi smartphone interface with Apple CarPlay™ and Android Auto integration for compatible devices, Audi connect PRIME and PLUS services (6-month trial subscription) and MMI® Navigation plus with MMI touch, further raising the bar as to drivers can expect from electric vehicles. Specially designed for e-tron, the Audi virtual cockpit includes unique displays such as a power meter screen which shows the range and consumption figures for both the electricity and gasoline, placed in the driver’s line of vision.

Also exclusive to the A3 Sportback e-tron is the available Sport package which adds a 3-spoke, flat-bottom, multifunction steering wheel with shift paddles, 18” 15-spoke Turbine-design wheels with all-season tires, front sport seats, and an S line roof spoiler, further differentiating the e-tron from the rest of the A3 model line.

Four unique drive modes within the Audi drive select system continue to allow e-tron drivers to dictate how to use the vehicle’s electric range to best suit their needs. From hybrid mode, which automatically chooses the most efficient power source based on speed and performance demand, to Sport mode, which uses all available power from both the combustion engine and the electric motor to deliver all-out performance, the e-tron is a versatile choice for a variety of daily driving needs.

The e-tron will be priced from $38,900 at the Premium trim level to $47,550 at the Prestige trim. In California, the vehicle’s largest market, purchasing customers who are residents of the state may also qualify for additional state and federal incentives and tax credits.

Federal tax credits are only available to qualifying taxpayers that purchase a new Audi A3 e-tron vehicle, and are not available to lease customers. Qualifications for state incentives will vary. All tax credits and incentives are subject to change. Please consult a tax professional for advices. This content does not constitute tax advice.