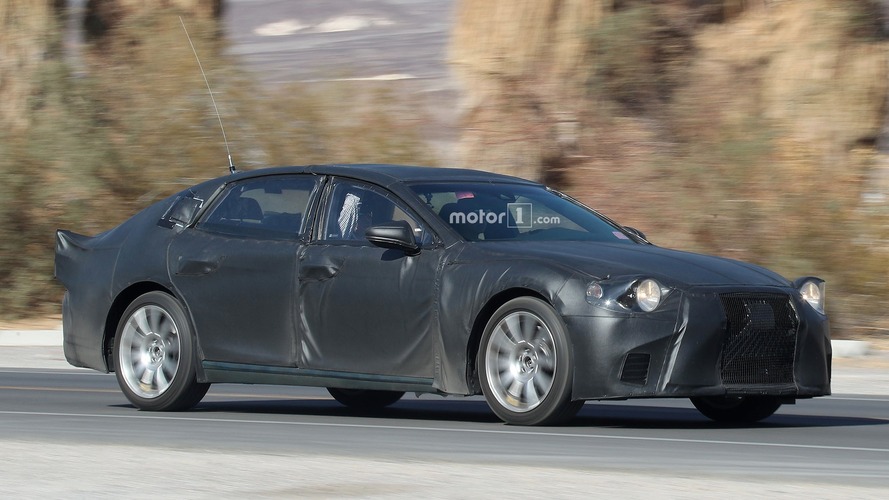 The old model and a couple Germans join the new LS for this hot-weather test.

Lexus continues to evaluate the next-gen LS on the road, and this time it has some rivals along, too. The engineering team clearly wants to check how the brand’s new flagship sedan performs in Death Valley against competitors like the current LS, BMW 7 Series, and Audi A8L.

The more angular styling on last year's LF-FC is a preview of what to expect from the flagship sedan's new look, but Lexus’ engineers continue to dress the LS in bug-eyed headlights and tail fins during testing in public. Don’t expect either of these hideous styling cues to appear on the production model, though. For a better idea of the rear’s actual shape, check out the photos with the trunk open because it’s a more realistic depiction of the back’s contours.

We haven’t seen photos inside of the new LS yet, but a top exec promised “cool interior stuff” that the brand had never done before. We think tech like a digital instrument cluster and gesture recognition could be possible. Customers should also expect the brand’s latest driver assistance systems.

Lexus won’t do anything too revolutionary with the LS’ powertrain at first. It will carry over the LC’s offerings of a naturally aspirated 5.0-liter V8 now with 471 horsepower (351 kilowatts) and 398 pound-feet (540 newton-meters) torque or a hybrid 3.5-liter V6 with a total system output of 354 hp (264 kW). However, there will be a hydrogen fuel cell version before the Olympics in Tokyo in 2020, according to rumors.

The more futuristic styling and upgraded tech is what the LS needs to get buyers’ attention again. The current model only looks stodgier in comparison to more recent luxury sedans like the Mercedes-Benz S-Class and latest 7 Series. Lexus has delivered just 3,768 of them in the United States through August, which was down 22.5 percent from the same period last year. For the entire 2015 calendar year, the brand moved 7,165 of the sedans – a 16.3-percent drop from 2014.