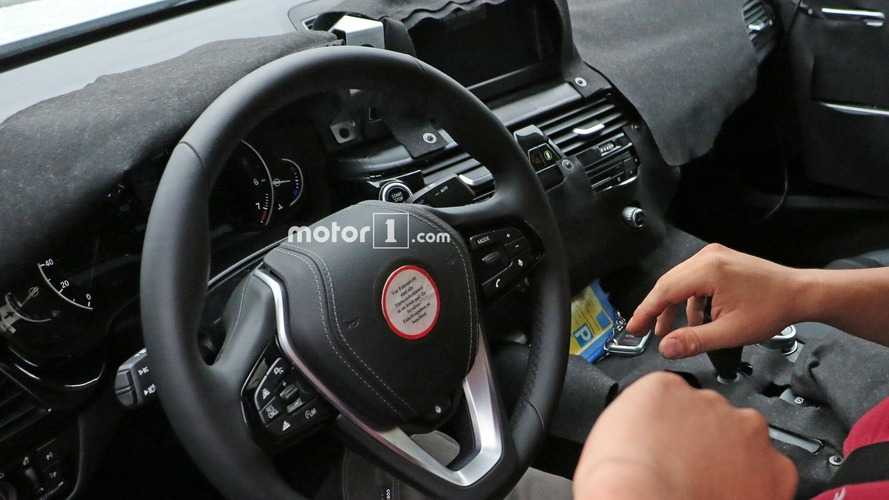 The redesign brings major improvements to the current model's weird back end.

As the debut approaches, BMW engineers appear to be more comfortable stripping off a little of the camouflage from the next-gen 5 Series, and these new spy photos of the GT body even give us a glimpse inside. The sedan version could premiere by the end of the month in time for the Paris Motor Show.

The engineers still largely hide this 5 Series’ interior, but the styling seems to follow the evolutionary updates from the exterior. Anyone familiar with the current model’s cabin could take a seat inside and feel right at home. The iDrive controller now sits next to the gearshift, rather than behind it, though. There’s no indication here of some of the high-tech amenities from rivals like Audi’s Virtual Cockpit instrument panel or even a much larger infotainment screen like the latest Porsche Panamera.

The new GT’s exterior shows major improvements over the current model’s ungainly design. The rear now shows better integration into the roofline, which avoids the present shape’s bulbous appearance. Compared to other recently spied examples of the next-gen 5 Series, this one also has a slightly different lower fascia because horizontal slats slice through the center portion.

The new 5 Series moves to a version of the CLAR architecture, which is also underneath the latest 7 Series. The new platform reportedly sheds 220 pounds (100 kilograms) off the model. Expect a huge array of engines options from BMW’s mid-range sedan, including four-, six-, and eight-cylinder choices. Plug-in hybrids would also be available for those that want to save some extra fuel. We don’t know which powerplant is in the GT in these spy photos, but the interior photo shows a 7,000-rpm redline.

While we expect to see the new 5 Series sedan in Paris, the GT’s debut might be further in the future. The wagon would likely arrive after the four-door version, and this model would be the last of the body styles to premiere. If you dig the new look, look for it in showrooms by the end of next year.