Nikola One truck will run on hydrogen, not battery power 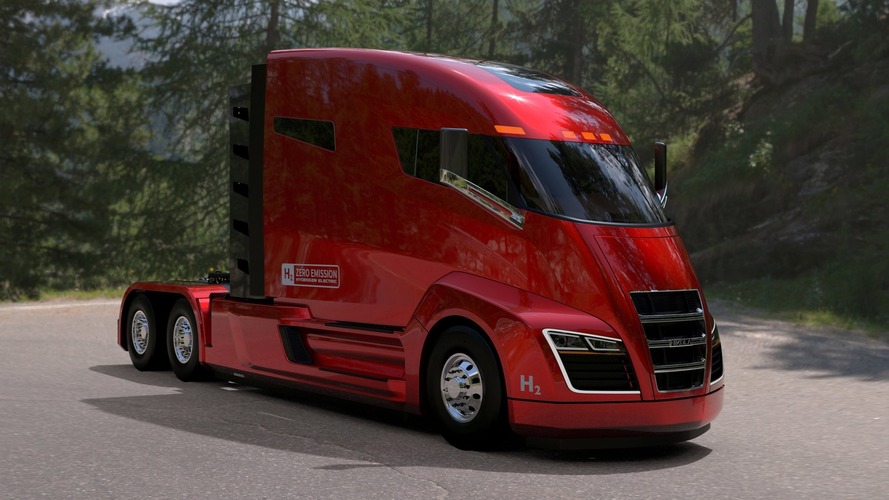 And the company intends to produce its own hydrogen fuel.

Salt Lake City-based start-up Nikola Motor Company has released more details about its zero emissions Nikola One semi-truck, confirming it will be powered by a hydrogen fuel cell rather than a battery pack as originally thought.

According to NMC, the truck will be run a custom-built hydrogen fuel cell powertrain, producing 800 volts. The company claims the system will produce more power than any diesel-engined truck available in the United States, and achieve fuel economy of nearly 20 miles-per-gallon, even with a full load.

As a result, it will cover 1200 miles (1900 kilometres) between fill-ups, and will be future proofed against all environmental targets coming into force within the next decade and beyond.

Of course, the biggest barrier to hydrogen fuel cell vehicles is the lack of infrastructure to support them. But NMC plans get round that problem by producing its own liquid hydrogen fuel that will then be sold to Nikola One operators through a network of 50 stations across the U.S. and Canada, which it plans to have in place by 2020.

The produce the fuel, NMC plans to build a number of large-scale solar farms each with the capacity to generate 100 megawatts of power. That power will then be used for electrolysis to produce hydrogen from water. NMC hopes there will even be enough left over to run its manufacturing facilities.

Trevor Milton, CEO of NMC, said: “Nikola Motor Company [will be] the first company in the world to be 100 per cent emission-free from energy production, to transportation, to consumption. Say goodbye to the days of dirty diesels and after treatment in heavy duty Class 8 market.”

The Nikola One will also be available with a gas turbine engine running on compressed natural gas in markets without easy access to hydrogen fuel.

NMC claims to have taken $3 billion of advance orders since opening the books in May, which equates to around 7000 units. We’ll find out more when the truck is unveiled on December 1.