Will be unveiled on October 3.

General Motors has teamed up with the U.S. Army Tank Automotive Research, Development and Engineering Center (TARDEC) to work on a fuel cell electric vehicle based on the Chevy Colorado. The joint effort represents a component of the agreement signed between the two parties last year to modify automotive technology for military purposes.

The army wants try out fuel cell electric propulsion and power generation systems starting next year when it will conduct a series of tests and demonstrations to show the benefits the hardware can bring. One of the advantages GM points out would have to be the low-end torque provided by the electric motors which are also quiet, thus making them ideal for a military vehicle that does not want to attract a lot of attention.

With the torque being available right away, electric motors are suitable for a heavy military vehicle that needs to go over obstacles and climb hills. There’s also an advantage brought by the fuel cells which generate water as a by-product that could be put to good use in a remote area. Featuring a fuel cell powertrain, it would mean the vehicle used for military applications would not have to be dependent on the electric grid, representing yet another important advantage. 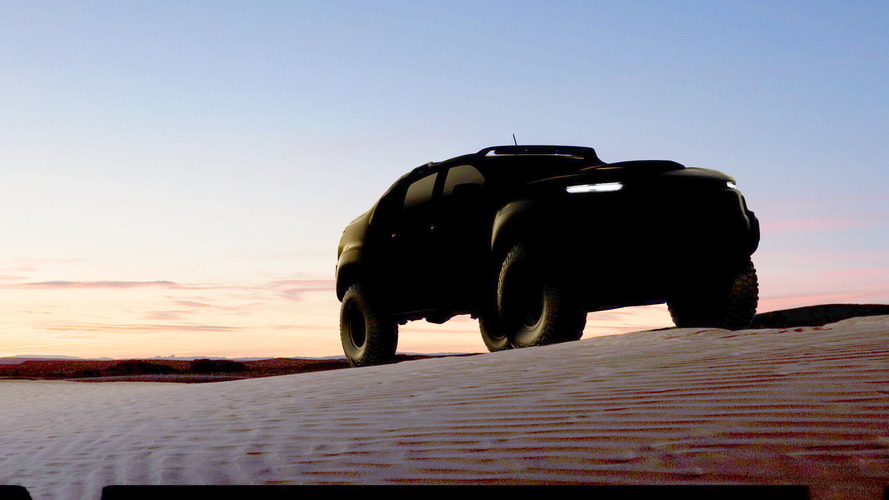 As for the Colorado itself, we only have an official teaser image for now that shows it will get a substantially beefier body and slender LED headlights. We modified the exposure and brightness of the photo to try and reveal more details, and you can easily notice the huge wheel arches, chunky off-road tires, and a very generous ground clearance.

It will be interesting to see whether the military-spec Colorado fuel cell vehicle will serve as foundation for a civilian variant in the years to come. We do know from Charlie Freese, executive director of GM’s Global Fuel Cell Activities, the company wants to have in production a commercial fuel cell system by the end of the decade.

Getting back to the military-ready Colorado, it will be introduced on October 3 during the meeting of the Association of the United States Army (AUSA) in Washington, D.C.

General Motors and the U.S. Army Tank Automotive Research, Development and Engineering Center (TARDEC) will reveal a Chevrolet Colorado-based fuel cell electric vehicle in October at the fall meeting of the Association of the United States Army (AUSA) in Washington, D.C.

The vehicle is being developed under an agreement between TARDEC and GM signed in 2015. The collaboration enables TARDEC to access consumer-driven automotive technology for use in military applications while providing GM with feedback on non-standard fuel cell technology applications.

Consistent with the Department of Defense’s desire to leverage commercial innovation in its next-generation technologies, the Army will use the vehicle to demonstrate the capabilities fuel cell electric propulsion and power generation systems can bring to the military, including quieter mobility, exportable power generation, low-end torque and water generation. The Army intends to conduct user assessments and demonstrations in 2017.

”Hydrogen fuel cells as a power source have the potential to bring to the force incredibly valuable capabilities,” said TARDEC Director Paul Rogers. “We expect the vehicle to be quiet in operation and ready to provide electricity generation for needs away from the vehicle. With fuel cell technology advancing, it’s an ideal time to investigate its viability in extreme military-use conditions.

“Fuel cell propulsion has low-end torque capability that is useful in an off-road environment,” Rogers said. “It also offers additional characteristics attractive to both commercial and military off-road use.”

Neither GM nor TARDEC released vehicle specifics, but Rogers said the Army is focusing on the technology and its capabilities, regardless of the platform.

“This project is another example of how fuel cell propulsion can play a role in non-traditional applications,” said Charlie Freese, executive director of GM’s Global Fuel Cell Activities. “We need to continue pursuing these opportunities along with our plans for production of a commercial fuel cell system in the 2020 time frame.”