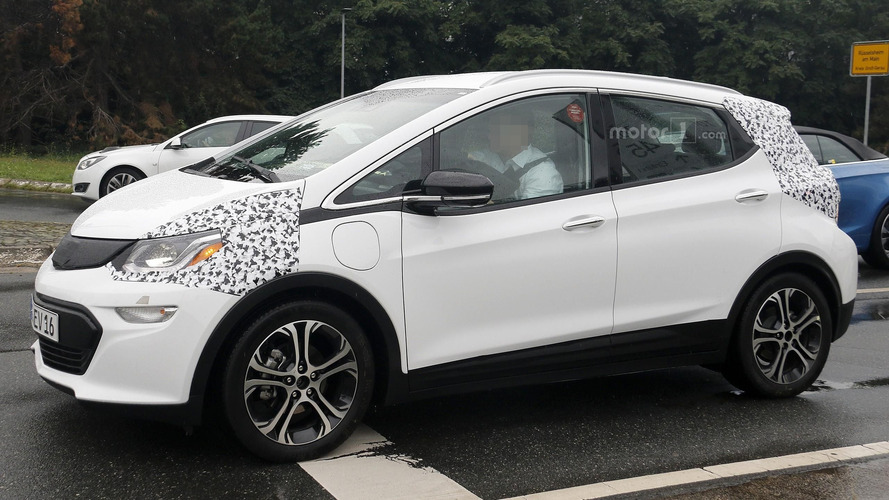 Why bother with the camouflage?

It was exactly a week ago when Opel revealed its intentions to show the Ampera-e at the upcoming Paris Motor Show, and now we are bringing fresh spy shots of a near-production prototype. Essentially the Euro version of the U.S.-bound 2017 Chevrolet Bolt, the all-electric hatch was conducting some last-minute testing ahead of a market launch next year.

The light camouflage applied on the test vehicle is redundant taking into account the Ampera-e will simply be a re-badged Bolt, unless the engineers are making some tweaks to the suspension and other areas of the EV to cater European tastes. Although it will wear the Opel badge, it might actually be produced by Chevy on the same assembly line as the Bolt at General Motors’ Orion factory near Detroit. It is not known at this point whether the Bolt/Ampera-e has been engineered for right-hand drive markets such as U.K. where it would be sold as a Vauxhall.

At the heart of GM’s new zero-emissions small hatchback is an electric motor pushing out a decent 200 horsepower (150 kilowatts) and 266 pound-feet (360 Newton-meters) of torque, with the latter being available right away. Although people won’t buy this car for its performances, Opel does say it will be able to deliver some lively acceleration, with the 0-31 mph (0-50 kph) taking 3.2 seconds, while the 80-120 kph (50-75 mph) sprint is going to be covered in a decent 4.5 seconds. Top speed on the other hand is not what you would call impressive, with the Ampera-e maxing out at only 93 mph (150 kph).

More importantly, Chevy has promised a range of more than 200 miles (320 kilometers) for the Bolt before running out of juice from the 60-kWh lithium-ion battery pack. We should point out the Ampera-e’s range will be based on the New European Driving Cycle which is substantially more optimistic than the Bolt’s EPA rating, so it will likely have a much higher range (on paper).

To give you an example, the Leaf fitted with the 30 kWh battery is rated at an EPA-estimated 107 miles (172 km) in the U.S. whereas in Europe the exact same model can cover 155 miles (249 km), as per NEDC. The discrepancy between the two is huge, so we might see something very similar in the case of the Ampera-e/Bolt twins.

As a reminder, the Ampera-e is going to be joined next year by the second-generation Ampera which will be a European equivalent of the new Chevy Volt available in North America. That's hardly surprising since the slow-selling, outgoing Ampera is actually an 'Europenized' first-gen Volt.