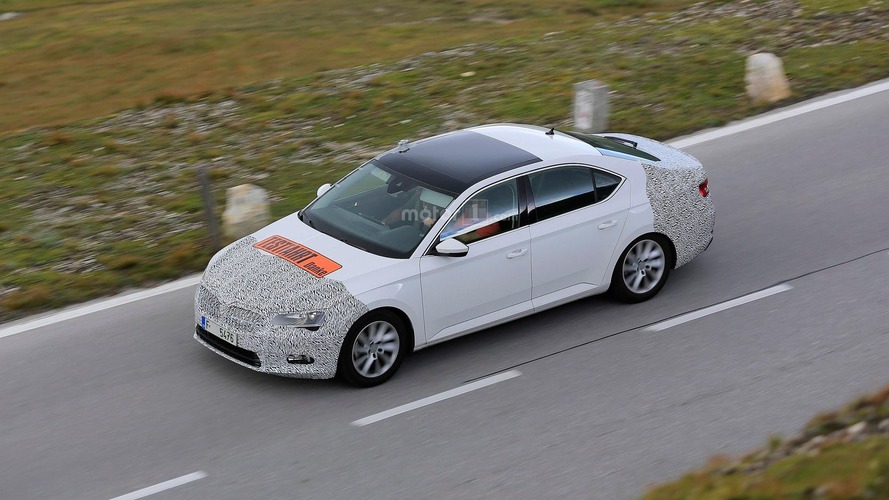 The third-generation Superb liftback and wagon came out just last year, so it’s a bit surprising to see Skoda’s range-topping model already preparing for a revision. That being said, the white prototype caught on camera earlier this week undergoing testing did not seem to carry any visual tweaks, unless there was something going on underneath the swirly camouflage.

Perhaps the headlight’s shape is about to be changed a little bit seeing as how there seems to be a greater distance between the extremity of the lighting cluster and the grille. However, that might be just an illusion caused by the disguise applied onto the front fascia. We do however notice Skoda’s corporate grille with vertical slats was hosting a couple of horizontal bars on both sides of the grille. It is highly unlikely those will make it to the production model since it would look quite peculiar.

The prototype was carrying some sort of a sensor or camera on its roof which might indicate Skoda was testing new safety and/or assistance systems. Being a member of the MQB family and sharing most of the bits and pieces with the plushier Volkswagen Passat, the Superb already has access to the group’s array of safety kit, but something new could be in the works. Also noticeable is the considerably lowered ride height compared to the regular model, and it could be a sign of some suspension tweaks inbound for the revised Superb.

While the interior cabin did not seem to be camouflaged at all, chances are Skoda will implement the new infotainment system (pictured above) set to debut on the Kodiaq seven-seat SUV which will have its world premiere tomorrow.

We already know the Superb is going to be Skoda’s first ever model to receive a plug-in hybrid powertrain, but that won’t happen until 2019. We also know the peeps from Czech Republic are also analyzing the prospects of a Superb vRS, even though initially they said no to a performance version. The most powerful model on sale today is the 280-hp version featuring a turbocharged 2.0-liter, four-cylinder engine linked to an all-wheel-drive system. A potential range-topping vRS would obviously have well over 300 hp and other mechanical tweaks, including a stiffer suspension setup. In addition, the hot derivative would also have a more aggressive design compared to the Sportline trim (pictured below.)

It remains to be seen whether the prototype photographed is a sign of a facelift or Skoda was testing some new kit that will be added in the next model years. Chances are the mid-cycle update will be introduced at the end of 2018 or early 2019, almost four years after the current-gen’s introduction.