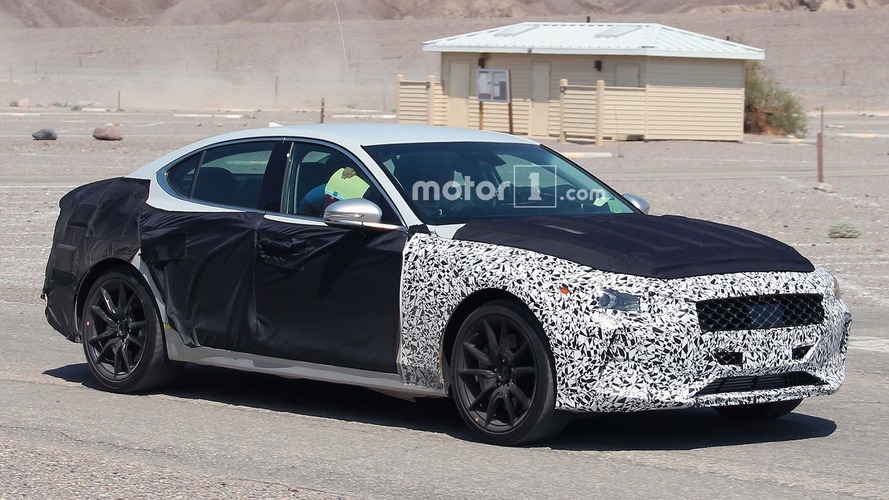 The production version of the luxury sedan takes design cues from the New York concept.

Hyundai’s Genesis luxury brand is preparing the G70 for a fight against segment stalwarts like the BMW 3 Series, Audi A4, and Mercedes-Benz C-Class. This fresh set of spy photos shows the sedan getting a workout in the desert before meeting the challengers.

Even through the abundant camouflage we can see that the G70’s front end takes clear inspiration from the New York Concept. A large mesh grille dominates the sedan’s face, and there are narrow headlights on each side, which wrap around towards the fenders. The cladding hides the profile's details, but the roofline suggests a less rounded rump than on the show car. Oval exhausts fill each corner at the rear, which is a sporty touch.

These photos don’t show the G70’s interior, but we don’t expect the high-tech wonderland from the New York Concept. The show car featured an LG-sourced 21-inch 4k display on the dashboard and a driver-oriented center stack. Other Genesis models tell us that the production version should have something far more conventional.

Hyundai is preparing a gradual rollout for the Genesis brand in the United States. Fewer than half of company’s dealers will sell the luxury models, though. The division will differentiate itself by giving vehicles exclusive platforms and engines. Customers will also get special treatment, like three years of valet service.

A leaked product timeline for the Genesis brand shows the G70 debuting just before 2017, so we could see it at an upcoming auto show. A coupe would also join the lineup before 2020. The division has two crossovers to add to the range before the end of the decade, too. The smaller one may share a platform for the G70.