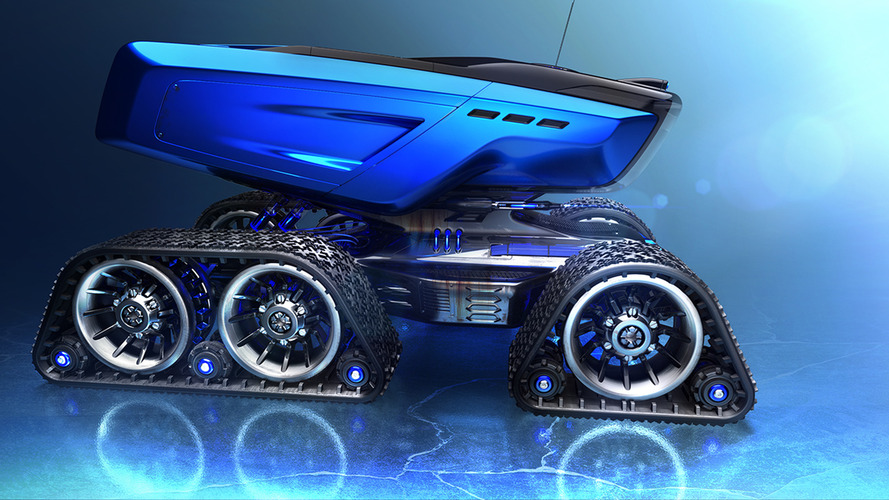 Designed to explore any planet, in any galaxy.

While NASA’s Mars Exploration Rover continues to gather samples and delve deeper into the Red Planet, one designer is envisioning his own space exploring vehicle here on Earth. Frederic Le Sciellour, a Transportation Designer at Jaguar, created an out-of-this-world exploration vehicle dubbed "The Rümker."

The goal was simple, “to create a vehicle for the exploration of [a] new planet,” says Le Sciellour. With that objective in mind, the Rümker puts to use all the necessary equipment one might expect.

Four sets of advanced tracks cover each corner of the vehicle. The rear is powered by two dual propulsion components on either side, while the front utilizes two singular propulsion units. The shocks wear a Fox logo, and put to use some sort of geothermal liquid that we can only assume helps traverse radical terrains.

The rectangular-shaped cabin is tilted downward to allow better visibility and reduce drag. Inside, astronauts and scientists will be able to live comfortably, all the while studying whatever planet they find themselves on in the meantime. Of course, a laser gun comes standard.

The Rümker itself is just a small part of the designer’s overall vision that includes an exploration base on the moon, and advanced propulsion methods that would allow for further exploration than ever before.

"They start their trip by leaving the Earth and landing on the moon,” says Le Sciellour. "Then all the exploration vehicles are loaded on a spaceship with solar sail. And then the travel starts."

Unfortunately, Le Sciellour won’t be pitching the Rümker to NASA any time soon. He admits that the concept isn’t "100 percent realistic" in regards to certain aspects of space travel, and that he just wanted to create something "we could see in a science fiction movie." Still, it’s a really creative idea.