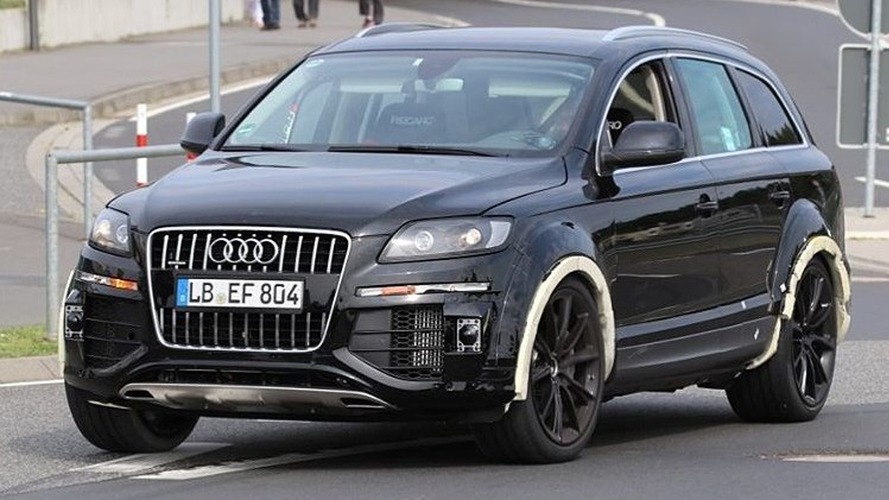 It’s one of those rare times when we stumble upon a couple of spy images, but we are not really sure what they are showing. Caught on camera just a few days ago at the Nurburgring was this, a test mule using the body of the first-generation Audi Q7. However, it did not look exactly the same as Ingolstadt’s previous big SUV since there were quite a few changes.

For starters, the headlights were not the ones you see on the production model and looked more like those provisional clusters fitted to numerous test vehicles. In addition, there was something going on with the front bumper, as it looked kind of weird with those add-on parts on its extremities. The huge vents might indicate the prototype was rocking a beefy engine, but one can never be too sure when dealing with vehicles so early in the testing phase.

That being said, there are other clues which make us think of something fast. Just look at the beefy wheel arches and the widened tracks, as well as inside the cabin where the test mule had Recaro front seats and a rear roll cage. The back of the vehicle was pretty much standard, unless our eyes are playing tricks on us and we have failed to notice any changes. It wasn't an electric vehicle because underneath the bumper the exhaust tips are visible, unless those are there just to throw as off, but that seems unlikely.

So, what could it be? Well, one possibility would be an early test mule of the Audi Q8. As you can see from the above pictures, the coupe-ish SUV has already been spotted by our spy photographers, but the prototype had a modified body sourced from the current, second-gen Q7.

Another distinct possibility is the production variant of the Lamborghini Urus concept pictured above. If we were to pick between the two options, we’d go with the bull. The test mule was exhibiting several sporty cues, so this could indeed be an early sign of the forthcoming SUV from Sant’Agata Bolognese. It’s pinned to go on sale sometime in 2018 and initially will be powered exclusively by a biturbo 4.0-liter V8 engine sourced from Audi, but tweaked by Lamborghini specifically for the Urus.

We will probably have an answer to the riddle in the months to come when Volkswagen (be it Audi, Lamborghini, Porsche, or the core brand) will have more evolved test vehicles on the roads.