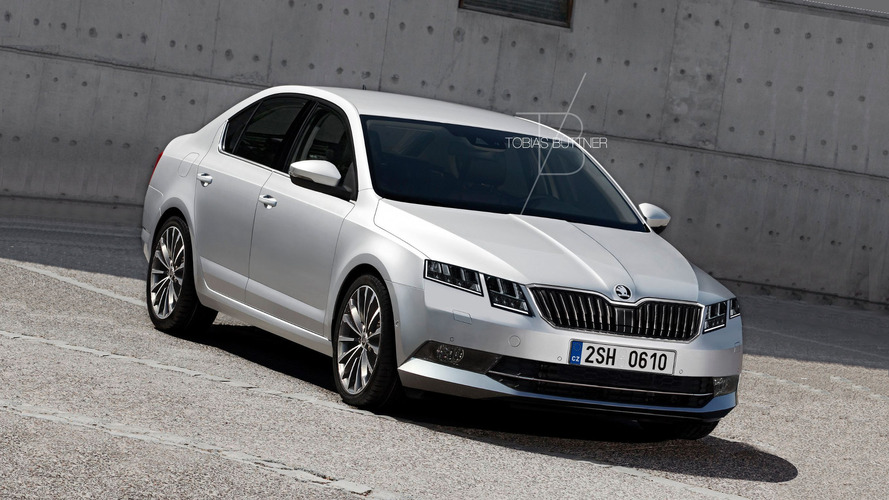 Split headlight design, more optional equipment, beefier vRS, and new technology are all on the agenda.

By far Skoda’s best-selling model, the third generation of the modern Octavia is getting ready to receive a mid-cycle refresh. While most facelifts of VAG products bring subtle design changes, it’s going to be an entirely different story for the hugely practical compact liftback and wagon from Mladá Boleslav.

The most dramatic change will occur at the front fascia where the revised Octavia will make the switch to a split headlight design, but not in the same way as the upcoming Kodiaq. While the latter is going to adopt a two-tiered layout as previewed by the VisionS concept, it is believed the 2018 model year for the Octavia will bring the dual lighting clusters at the same level. Motor1 reader Tobias Büttner was kind enough to share with us a higher resolution version of his speculative render to get an idea about what to expect from the real deal.

Design aside, it’s unclear at this point whether the facelift will welcome full LED headlights as a replacement for the current bi-xenon (plus LED daytime running lights) setup. With its main rivals Renault Megane, Opel Astra, and Peugeot 308 all offering optional full LED headlights, it would make sense for the Octavia to take advantage of the technology as well to keep up with its competitors. As a side note, the Kodiaq seven-seat SUV due to be unveiled next Thursday will be the first Skoda ever to offer this type of equipment.

Rumor has it the Octavia’s grille will be modified for the facelift to look more like the one on the flagship Superb. At the back, the taillights will remain just about the same, although the C-shaped graphics will receive a nip and tuck, according to Auto Express.

Being only a facelift, there won’t be any changes in terms of size, so the 2018MY Octavia will remain the most practical model in its class. There will however be some modifications inside, where Skoda’s most important model is going to be available with an optional heated steering wheel. The news was announced earlier this year by Skoda Ireland on Twitter, with a company representative saying the vRS will have it early 2017.

It probably means the option will come along with the facelift at the beginning of next year, so an official debut of the refreshed Octavia should occur before the end of 2016. Reports are indicating production of the updated model is scheduled for week 8 of next year which would mean the end of February, with customer deliveries to kick off mid-March. These dates seem plausible if we take into account Skoda has already commenced pilot production of the revised variant.

Besides getting a heated steering wheel option, the model year change will see the introduction of a larger touchscreen for the highest-spec infotainment system. It will be very similar if not the same one the Golf VII facelift will have (pictured above), and it will likely measure 9.2 inches. AE mentions an optional all-digital instrument cluster also taken from the Golf facelift will also be offered later on, but we wouldn’t get our hopes up too high since Skoda is after all the lesser marque of the group.

In terms of engines, these will be largely carried over from the current model, although the familiar 1.8 TSI might be dropped and replaced by a de-tuned version of VAG’s 2.0 TSI. The Audi A3 facelift has already made this switch, and we know the Kodiaq will get the 2.0 TSI, so perhaps the group is slowly starting to retire the 1.8-liter.

A plug-in hybrid version will not be offered this generation since Skoda has already announced the Superb will be the first model from the company to get an eco-friendly derivative in 2019 when the Octavia IV will likely come out. Until then, the 1.4 TSI and 1.6 TDI will eventually be replaced by new 1.5-liter engines which are going to be lighter and more frugal. The Golf VII facelift will get them at some point next year, but it remains to be seen when the Octavia will receive the units that will be available in different states of tune across the group.

We have saved the best for last. It is believed the facelift is going to bring a more powerful Octavia vRS 245 which as the name indicates will offer 245 PS (241 hp / 180 kW) from a turbocharged 2.0-liter, four-cylinder engine. While the Leon Cupra has 280 PS and even 290 PS, it seems VAG does not want to unlock that much power for the Leon’s Czech cousin. People in the market for a go-faster Octavia vRS will likely be disappointed, but at least the facelift is expected to bring a minor bump in power over the existing vRS 230 flagship (pictured below).

The output in hike will bring a slight improvement in terms of performance compared to the vRS 230 which hits 62 mph (100 kph) in 6.7 seconds and tops out at an electronically-limited 155 mph (250 kph). The current range-topping Octavia is Skoda’s first ever model to come with a speed limiter which is unlikely to be raised for the vRS 245 since even the aforementioned Leon Cupra 290 is capped at 155 mph.

With 32,200 units sold in July (twice more than Rapid, the second best-selling model), it's perfectly understandable why chief designer Jozef Kaban says the model will remain the 'heart of the range', even after the crossover/SUV onslaught. Skoda is certainly hoping the inbound facelift will allow the Octavia to recoup some of the sales it has lost in the last few months, with more people shopping in this segment deciding to go with the fresher Astra and Megane.