These supercars sculpted from scrap metal are incredible 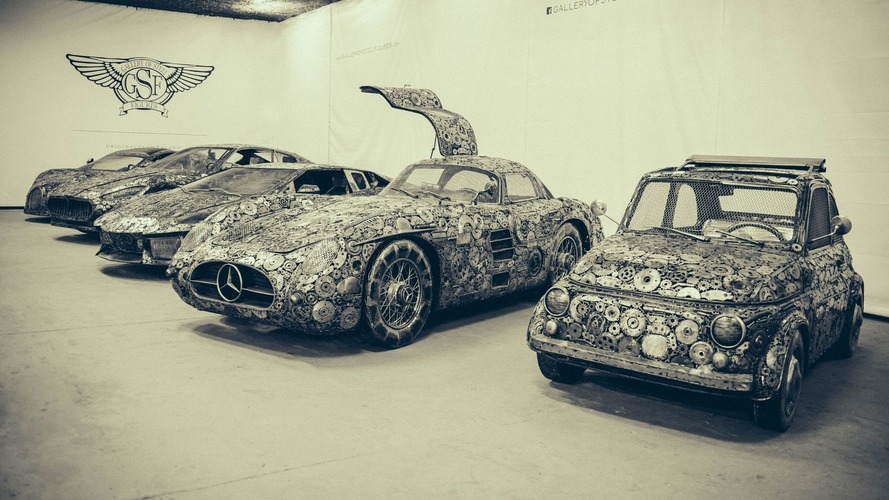 The level of detail and accuracy is astonishing.

At a casual glance, you could easily think the supercars you see here are the real thing with a wrap. But no. They’re actually sculptures, made entirely from thousands of small pieces of scrap metal.

A group of 50 artists came from across the world to a scrap yard in Warsaw, Poland to create the pieces, which include a 1950s Mercedes 300 SLR Uhlenhaut Coupe, a Lamborghini Aventador, a Maserati GranTurismo MC, a Bugatti Veyron, a Pagani Zonda R, and a classic Fiat 500. And the level of detail they achieved is simply staggering.

Every line, curve, grille, intake, and strake has been replicated as accurately as possible; the interiors and engines, too. Even the doors and hoods open so you can admire, poke around, and sit in them.

Some artistic licence has been taken, of course, particularly with the interiors and engines, but even with the sculpture sat next to the real thing, it would take pretty close examination to spot the differences.

Incidentally, the artists haven’t revealed what references they had to work from, but it would be surprising if they had more than photos and measurements.

They are currently on display at the Galleria Figur Stalowych in Pruszkow, Poland and are due to be shown at the 2017 Dubai Auto Show. The sheiks will no doubt be falling over each other to buy one; I certainly would if I could.