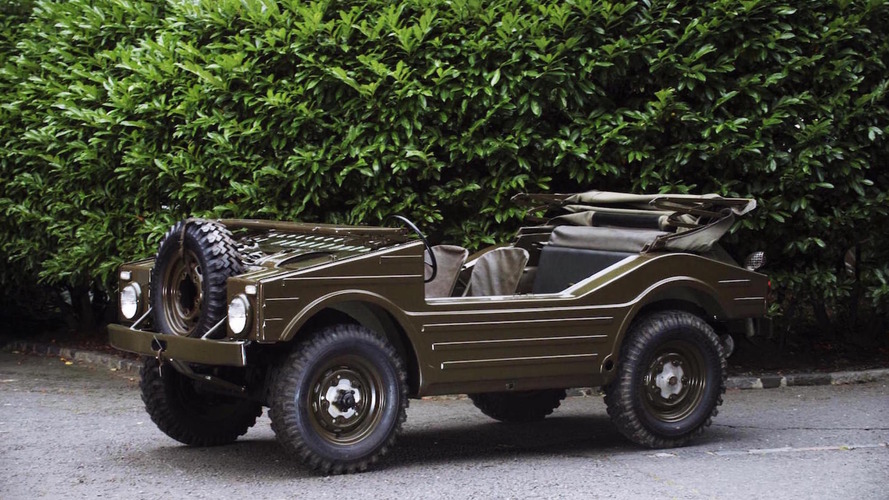 This is the Porsche you probably didn’t even know exists.

Believe it or not, this is a Porsche. Like the Willys Jeep, Land Rover, and many others before it, the 597 Jagdawagen 4x4 was a vehicle developed by the German marque specifically for military use. Unfortunately, the 597 would never see a battlefield, but it will see an auction block at the upcoming Goodwood Revival.

Influenced in design by the Volkswagen Kubelwagen - built by none other than Ferdinand Porsche - the 597 improved on looks and performance, utilizing things like higher side sills, torsion-bar stabilizers, and an air-cooled four-cylinder engine located in the rear.

A mere 50 horsepower (37 kilowatt) came from under the hood, and top speed was around 62 mph (100 kmh). Still, the vehicle served its purpose all the same. The 597 had the ability to climb gradients as steep at 65 percent, was semi-amphibious, and the vinyl top and weather-proof interior allowed it to be used virtually anywhere.

Due to Porsche’s infancy, and inability to produce the vast amount of vehicles the military required, only 71 examples were made between 1955 and 1958, 49 of which were designated for the civilian market. This one was sold new in Germany for private use, and has remained in a Japanese collection since 2012.

Its name roughly translating as 'hunting car', the Jagdwagen was a light military vehicle designed to fill much the same role as the Jeep, VW Kubelwagen, and Land Rover. Porsche developed the prototype in the early 1950s in response to a request from the German Army, although the cheaper DKW Munga was preferred and the Jagdwagen was never produced in significant numbers. In any case, Porsche had nothing like the production capacity required to meet the Army's needs in the proposed time scale. Development costs were estimated to be approximately 1.8 million Deutschmarks.

The vehicle was propelled by the Porsche 356 sports car's air-cooled flat-four engine, which was located at the rear as in the donor car. Early versions has the 1.5-litre engine, later ones the 1.6-litre unit, the latter's 50 horsepower maximum being good enough for a top speed of around 100km/h (62mph). Weighing 990 kilograms, the Jagdwagen featured a five-speed manual gearbox with additional on-the-fly two/four-wheel-drive shifting. With a wheelbase of only 2,060mm, the vehicle could climb gradients as steep as 65%.

The prototype body was manufactured by Porsche in Stuttgart with later versions (featuring torsion-bar stabilisers) made by coachbuilders Karmann. The monocoque body/chassis lacked doors, passengers having to climb in and out over the high sills. One advantage of this design was that the body was buoyant, making the Jagdwagen effectively amphibious. Later versions came with doors and a reshaped bonnet and front wings.

Only 71 Porsche 597s were manufactured between 1955 and 1958, 49 of which were built for the civilian market. Some within Porsche hoped that the company would produce an updated vehicle based on the 597 platform with a strengthened chassis, extended wheelbase of 2,400mm, and a range of five different body types. However, the project was eventually cancelled and this new vehicle never saw the light of day.

Sold new in Germany, this rare Jagdwagen is one of those supplied for private use rather than military purposes. It was purchased by the current owner in Japan in 2012 following a worldwide search, and since then has been used sparingly. The vehicle runs and drives and is described as in very good cosmetic condition. It is only offered for sale because the vendor has decided it is too precious to use on his country estate, despite the fact that it was built for just such a purpose! The ideal acquisition for the Porsche collector who thought they had everything.