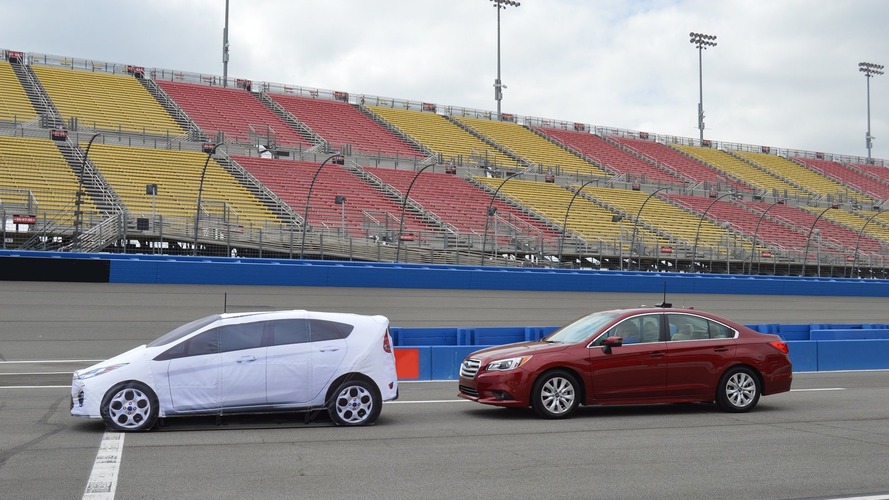 Not all systems stop a car completely.

Automatic emergency braking systems are becoming increasingly common. More than 50 per cent of cars on sale in the United States are available with the technology, and by 2022 it’ll be standard equipment on 99% of new cars.

But AAA has discovered that there are big differences between the various manufacturers’ systems. There are two types in use: those designed to lessen the severity of an impact, and those designed to prevent one entirely. Tests of both types fitted to five 2016-model cars revealed that the former sheds much less speed than the latter when it applies the brakes.

That result is perhaps predictable, but the scale of the contrast is pretty stark. AAA found that prevention systems reduced speed by 79%, which was enough to avoid 60% of impacts with a vehicle travelling 30 miles-per-hour slower.

Systems designed to the lessen an impact, meanwhile, reduced speed by only 40%, but that was enough to avoid one third of impacts in the 30 mph differential test. However, when faced with a stationary vehicle while travelling at 45 mph, speed was only reduced by 9%. In the same scenario, prevention systems slowed by 74%, avoiding 40% of impacts all together.

Megan McKernan, of the Automobile Club of Southern California’s Automotive Research Center, which assisted in the study, said: “Automatic emergency braking systems have the potential to drastically reduce the risk of injury from a crash. When travelling at 30 mph, a speed reduction of just 10 mph can reduce the energy of crash impact by more than 50%.”

“When shopping for a new vehicle, AAA recommends considering one equipped with an automatic emergency braking system,” said John Nielsen, AAA’s managing director of Automotive Engineering and Repair. “However, with the proliferation of vehicle technology, it’s more important than ever for drivers to fully understand their vehicle’s capabilities before driving off the dealer lot.”

And most of all, remember that these systems are a last ditch measure. The idea is to not get anywhere close to a crash situation in the first place.

ORLANDO, Fla (August 24, 2016) – New test results from AAA reveal that automatic emergency braking systems — the safety technology that will soon be standard equipment on 99 percent of vehicles — vary widely in design and performance. All the systems tested by AAA are designed to apply the brakes when a driver fails to engage, however, those that are designed to prevent crashes reduced vehicle speeds by nearly twice that of those designed to lessen crash severity. While any reduction in speed offers a significant safety benefit to drivers, AAA warns that automatic braking systems are not all designed to prevent collisions and urges consumers to fully understand system limitations before getting behind the wheel.

“AAA found that two-thirds of Americans familiar with the technology believe that automatic emergency braking systems are designed to avoid crashes without driver intervention,” said John Nielsen, AAA’s managing director of Automotive Engineering and Repair. “The reality is that today’s systems vary greatly in performance, and many are not designed to stop a moving car.”

In partnership with the Automobile Club of Southern California’s Automotive Research Center, AAA evaluated five 2016 model-year vehicles equipped with automatic emergency braking systems for performance within system limitations and in real-world driving scenarios that were designed to push the technology’s limits. Systems were tested and compared based on the capabilities and limitations stated in the owner’s manuals and grouped into two categories — those designed to slow or stop the vehicle enough to prevent crashes, and those designed to slow the vehicle to lessen crash severity. After more than 70 trials, tests reveal:

“Automatic emergency braking systems have the potential to drastically reduce the risk of injury from a crash,” said Megan McKernan, manager of the Automobile Club of Southern California’s Automotive Research Center. “When traveling at 30 mph, a speed reduction of just 10 mph can reduce the energy of crash impact by more than 50 percent.”

“When shopping for a new vehicle, AAA recommends considering one equipped with an automatic emergency braking system,” continued Nielsen. “However, with the proliferation of vehicle technology, it’s more important than ever for drivers to fully understand their vehicle’s capabilities and limitations before driving off the dealer lot.”

For its potential to reduce crash severity, 22 automakers representing 99 percent of vehicle sales have committed to making automatic emergency braking systems standard on all new vehicles by 2022. The U.S. Department of Transportation said this voluntary agreement will make the safety feature available on new cars up to three years sooner than could be achieved through the formal regulatory process. According to the National Highway Traffic Safety Administration, rear-end collisions, which automatic emergency braking systems are designed to mitigate, result in nearly 2,000 fatalities and more than 500,000 injuries annually. Currently, 10 percent of new vehicles have automatic emergency braking as standard equipment, and more than half of new vehicles offer the feature as an option.

AAA’s testing of automatic emergency braking systems was conducted on a closed course at the Auto Club Speedway in Fontana, California. Using instrumented vehicles and a state-of the-art robotic “soft car” that allowed for collisions without vehicle damage, AAA collected vehicle separation, speed and deceleration data in a variety of crash scenarios designed to mirror real-world driving conditions. The testing was designed to build on previous testing by the Insurance Institute for Highway Safety. For additional information, visit NewsRoom.AAA.com.

As North America’s largest motoring and leisure travel organization, AAA provides more than 56 million members with travel, insurance, financial and automotive-related services. Since its founding in 1902, the not-for-profit, fully tax-paying AAA has been a leader and advocate for the safety and security of all travelers. Motorists can map a route, identify gas prices, find discounts, book a hotel and access AAA roadside assistance with the AAA Mobile app for iPhone, iPad and Android. Learn more at AAA.com/mobile. AAA clubs can be visited on the Internet at AAA.com.