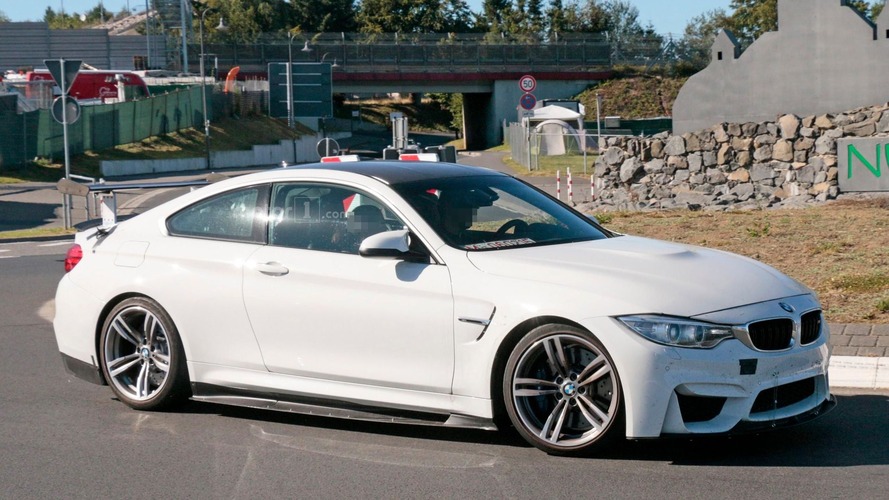 Could be a track-oriented special edition.

The BMW M4 Coupe prototype we spotted a few days ago is making a comeback in a new batch of spy images showing the car heading towards its natural habitat, the challenging Nürburgring. Judging by the multiple aerodynamics tweaks, we are tempted to say it will be a special edition targeting buyers that are big fans of track days.

While the prototype is based on the current M4, most likely the production-ready car will be introduced along with the facelifted M4 rumored for a March 2017 launch. That means it will get the new full LED headlights and modified taillights which could be offered at an additional cost with OLEDs like the prototype we caught on camera earlier this month. The organic light-emitting diodes for the taillights are currently reserved for the M4 GTS, but maybe BMW’s facelift (called ‘Life Cycle Impulse’) for the M4 will extended the availability of OLED taillights to the lesser version.

Lighting clusters aside, the white prototype appears to take some bits and pieces from the M4 Competition Sport special edition sold in Spain. The latter is basically a watered-down M4 GTS, but at the same time it has several upgrades over the regular M4. If the new version won’t turn out to be a special edition, it could become a permanent member of the family to bridge the gap between the standard model and the sold-out GTS.

Whatever it is, the aerodynamic package currently being prepared by BMW will certainly help the car perform well on a track.