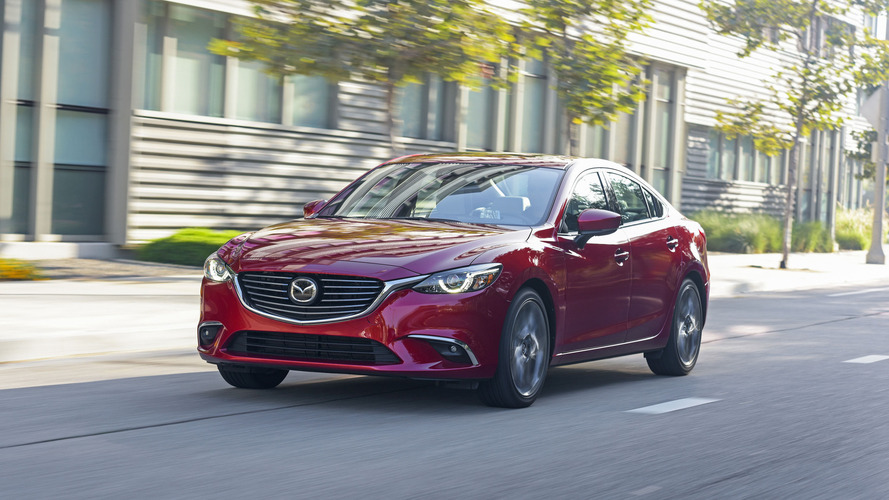 Mazda announced a bevy of updates for the 2017 Mazda6 a few weeks ago, and now the company has followed up by announcing the price for these improvements. The base Sport trim with a six-speed manual, which now gets the Mazda Connect infotainment system standard, starts at $22,780 (after $835 destination) or $23,830 with a six-speed automatic, which are $465 and $15 more respectively than the 2016 model. All trims also benefit from features like company’s G-Vectoring Control, which improves smoothness when cornering, and extra sound deadening.

The Touring model now comes with Smart City Brake Support, automatic headlights, and rain-sensing wipers as standard features. Prices for them start at $25,050 with a six-speed manual or $26,080 with the automatic. Those prices are up $1,315 and $265 higher than last year respectively.

Finally, the range-topping Grand Touring trim includes new standard features for 2017, including Lane Keep Assist, Traffic Sign Recognition, High Beam Control, and the HUD adjusts with the height of the driver’s seat memory setting. Prices start at $31,530, which is $515 more than the 2016 model.

Deliveries of the 2017 Mazda6 begin in September.

IRVINE, Calif. (August 23, 2016) – From its upscale interior to its seductive KODO—Soul of Motion design to its driving dynamics that constantly prove more fun than any midsize sedan has a right to be—earning it accolades throughout world—Mazda6 has shown time and time again that it’s a family sedan without compromise.

For 2017, that sedan has been thoroughly updated with the introduction of Mazda’s exclusive—and standard—G-Vectoring Control vehicle dynamics technology and added sound absorption refinement, among many other upgrades. Yet, those improvements come starting with an MSRP1 of just $21,945.

The entry point to the 2017 Mazda6 range is the Sport trim level, which comes equipped with a six-speed manual transmission, electronic parking brake, 60/40 split-folding rear seat, push-button starter, 17-inch alloy wheels, a backup camera and the MAZDA CONNECTTM infotainment, which is newly standard on the Mazda6 Sport equipped with the standard six-speed manual transmission. MAZDA CONNECTTM integrates Bluetooth hands-free phone pairing and audio streaming, USB pairing and diagnostic controls into a 7.0-inch full-color display that works in conjunction with a Commander control knob, voice commands and a touchscreen. Mazda6’s SKYACTIV-DRIVE six-speed automatic transmission is a $1,050 standalone option on Sport and Touring trim levels.

As with CX-9 and the 2017 MX-5 Miata RF, Machine Gray Metallic will be featured as a new premium paint color, joining Soul Red Metallic and Snowflake White Pearl Mica across the Mazda6 range.

Mazda North American Operations is headquartered in Irvine, Calif., and oversees the sales, marketing, parts and customer service support of Mazda vehicles in the United States and Mexico through nearly 700 dealers. Operations in Mexico are managed by Mazda Motor de Mexico in Mexico City. For more information on Mazda vehicles, including photography and B-roll, please visit the online Mazda media center at www.mazdausamedia.com.