Rare 1964 Morgan Plus 4 Plus heading to auction in London 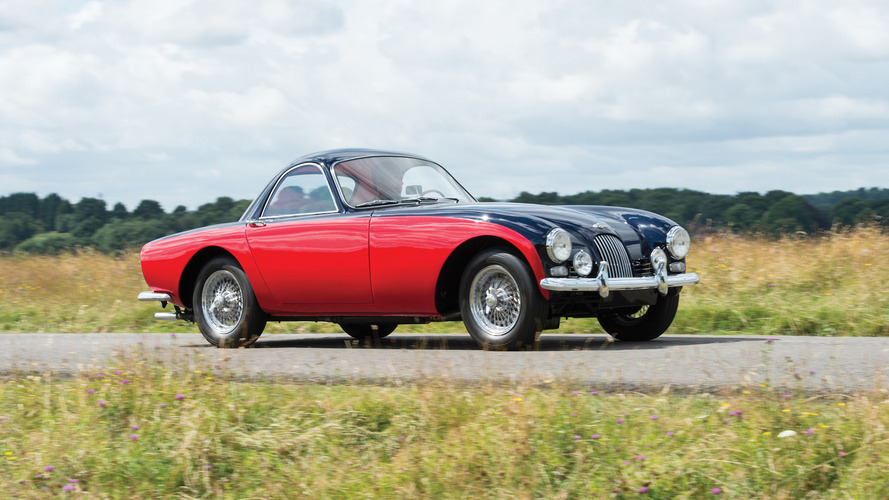 One of just 26 examples ever produced.

Morgan has a history of doing things differently, and its 1964 Plus 4 Plus is a perfect reflection of that. Only 26 examples were ever produced, and for its day, it was considered one of the most progressively engineered cars on the market. Now, it’s heading to auction at RM Sotheby’s.

The car pictured here is number five of 26 - chassis A5558. It wears a stunning two-tone black and red paint job, and has had five owners since new. It’s garnered a number of accolades, including a mainstay feature in Classic & Sports Car Magazine, June 2015.

Under the hood is a 105-horsepower (78 kilowatt) engine paired to a four-speed manual synchromesh transmission. The exterior is constructed of fiberglass, one of the earliest British road cars to use the lightweight material exclusively, and the suspension is an independent front-coil spring, paired with a solid rear axle.

Destined for Vancouver, British Colombia, when it left the U.K. in 1964, this example features a number of North American-specific options; wire wheels, disc brakes, and a wood-rimmed steering wheel. The factory black and red leather interior remains as well.

Originally owned by George “G.B.” Sterne - also known as “Mister Morgan” - he would remain in possession of the car until June 18th, 1974. It was sold with 23,000 miles on the odometer and was used regularly in Canada until being sold again on April 5th, 2004.

Gallery: 1964 Morgan Plus 4 Plus Auction

The Plus 4 Plus (or + 4 +) was Morgan’s attempt at introducing a technologically advanced model that incorporated modern styling, closed coachwork, and fibreglass construction all at the same time. The Plus 4 Plus was introduced at the 1963 Earls Court Motor Show, though it was not greeted by the anticipated warm reception. Accordingly, production of the model ceased at just 26 examples over three years, which was just over half of the anticipated production run of 50 cars. Although the streamlined coupé body was a radical departure from the traditional models produced by the Morgan Motor Company, it boasted a lithe weight of only 816 kilograms and a top speed around 185 km/h, as well as more interior space and legroom.

This 1964 model year example, chassis A5558, left the Morgan factory on 24 December 1963 as the fifth Plus 4 Plus of the 26 examples ever to be built. The Morgan was destined for Sterne’s Garage in Vancouver, British Colombia. As a North American-specification example, it came equipped with wire wheels, disc brakes, and a wood-rimmed steering wheel, and it was finished in black with a red leather interior.

The original owner of the car was George Beatty “G.B.” Sterne, who was arguably known as “Mister Morgan” of Western Canada and the United States Pacific Northwest. In late 1956, Sterne became the official Morgan concessionaire for all of Western Canada. To promote the Morgan brand, G.B. and his son, Bob, competed in hundreds of races at dozens of tracks and reportedly accumulated hundreds of trophies under their belts.

Chassis A5558 would remain with Mr Sterne until 18 June 1974, when it was sold to Dr David Reid of Princeton, British Columbia. The mileage reading at the time was approximately 23,000, and it continued to be regularly used by Dr Reid after he repainted it in Robin’s Egg Blue.

Dr Reid retained the Plus 4 Plus until 5 April 2004, when it was purchased by Dennis Glavis of Morgan West in Santa Monica, California, with approximately 43,000 miles showing on the odometer. A full restoration commenced, with all work performed by Pierre Brun of Morgan Westorations in Santa Monica. The exhaustive work was completed in April 2007, with the car now being finished in a flattering two-tone scheme of black and red and featuring a red leather interior.

A string of concours showings in California commenced between 2007 and 2013, with numerous accolades bestowed on the car, including Best of Show at the MogWest Concours in Morrow Bay, California, and Best in Class at the Los Angeles, Carmel-by-the-Sea, Newport Coast, Beverly Hills, Dana Point, and Greystone Mansion Concours d’Elegance. It subsequently returned to England, where it was acquired by the current and only fifth owner. He has since taken the car on a few outings to Shelsley Walsh as well as a Morgan gathering, where it was greeted with great acclaim. This delightful Morgan was also featured in the June 2015 issue of Classic & Sports Car.

This Plus 4 Plus is offered in excellent condition, and it is supplied with a tool kit, a Plus 4 owner’s manual, and a substantial binder of reference material.