Mercedes-AMG GT Roadster spied at home in the Green Hell 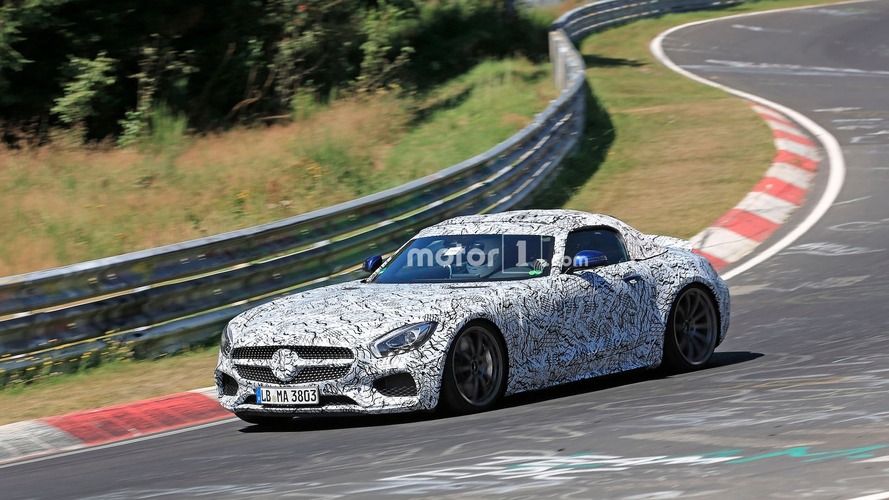 Opening the soft top should let drivers better enjoy the sound of the 4.0-liter biturbo V8.

The engineers at Mercedes-AMG are preparing to take the top off the GT, and these new spy shots catch the convertible during a workout at the Nürburgring Nordschleife. As earlier photos indicate, the Roadster is Mercedes challenger against the 911 Cabriolet.

This GT wears a lot of camouflage, but you can see from the rear that it features a folding soft top, which saves weight versus metal panels. The design at the front is practically identical to the coupe. The stylists sculpt the back to add extra room for letting the roof slide into it. The changes give the appearance of bigger hips in the rear, which should look especially good when the top is down. Expect very minor interior tweaks, like the availability of Mercedes’ Airscarf tech.

Mercedes’ 4.0-liter biturbo V8 is still under the hood and should have the same outputs as in the coupe. Standard models would produce 456 horsepower (340 kilowatts) and 443 pound-feet (601 Newton-meters) of torque, and the more powerful S would have 503 hp (375 kW) and 479 lb-ft (649 Nm). Both engines would use a seven-speed dual clutch gearbox. There’s no indication yet of a droptop version with the GT R’s tune with 585 hp (436 kwW) and 516 lb-ft (700 Nm) of torque, but nothing seems to stop Mercedes from building one in the future.

The Mercedes product plan shows the GT Roadster debuting in the first half of 2017. It would likely be on sale in some regions in time for the warm summer weather.