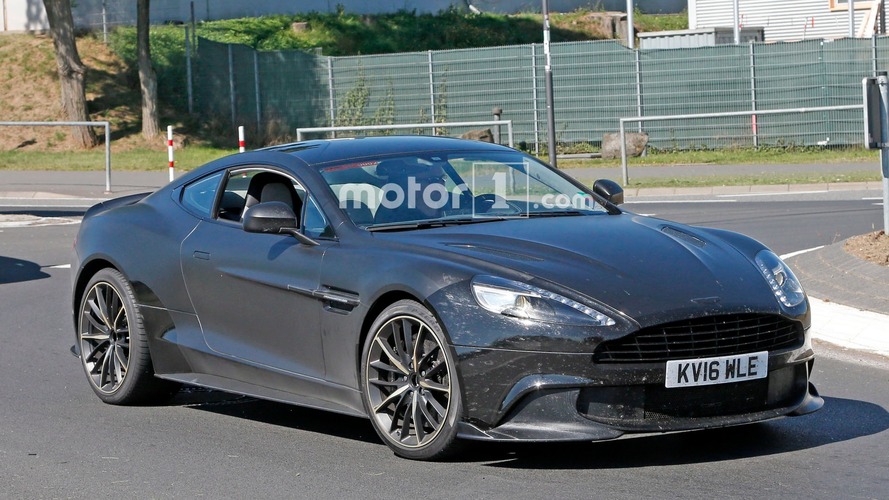 A meaner look and more power gives the model a proper send-off.

A new batch of spy photos provides further evidence that Aston Martin intends to give the current Vanquish a fond farewell before the next generation premieres around 2018.

Possibly called the Vanquish S, the new model features aggressive additions to the body, including larger intakes in front and new splitters at the corners. The side sills appear a little lower, too. The changes are more obvious at the rear where Aston Martin installs a sharp-edged diffuser and a pair of dual-exit exhausts. The parts give the coupe a meaner attitude, but it still looks quite handsome. Earlier spy shots also showed a droptop Volante under development.

More power is a very safe expectation for this final evolution of the current Vanquish. Aston Martin already turns up its 6.0-liter V12 to 592 horsepower (441 kilowatts) in the Vanquish Zagato, so look for at least that much in the S.

The Vanquish S might not be on the market very long. Time is running out for a debut in 2016, and Aston Martin’s product strategy schedules the next-gen model for 2018. The new platform would come from the DB11, and the coupe would reportedly have a tuned version of the brand’s biturbo V12 with as much as 820 horsepower (612 kilowatts), according to one rumor.

The standard Vanquish last received a major upgrade in 2015 when Aston Martin added its Touchtronic III eight-speed automatic gearbox. The upgrade and a few more horsepower from the V12 sliced half a second off the sprint to 62 miles per hour (100 kilometers per hour).