VW Teramont spied inside and out without any camo 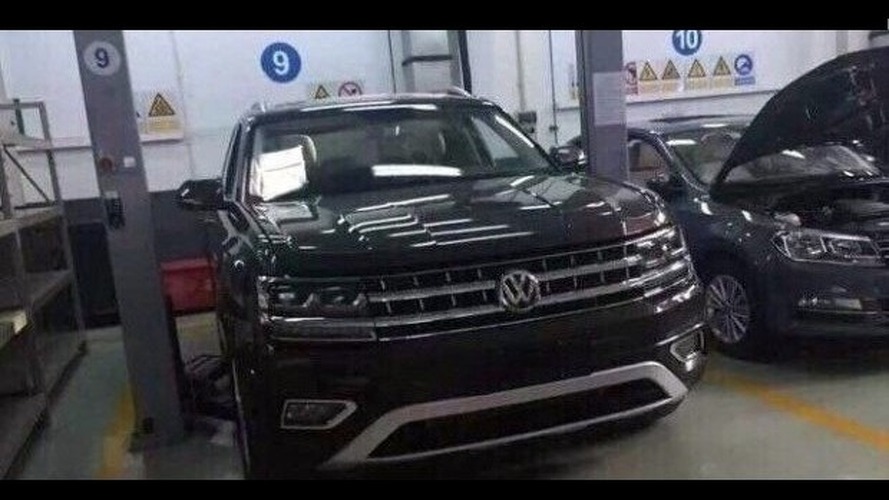 This is VW’s brand new three-row SUV likely to be called “Teramont.” A pre-production prototype was spotted without any sort of camouflage somewhere in China ahead of the model’s official debut scheduled to occur in the months to come. Previewed by the 2013 CrossBlue, the upcoming seven-seater looks like your typical VW SUV, without bringing anything new in terms of styling.

The front end comes with a shiny chrome grille and a plethora of silver accents which might be reserved for the Chinese version set to be produced starting 2017 by the local FAW-Volkswagen joint venture. We don’t have a clear image of the side profile, but our recent spy photos showed the Teramont will play it safe by following VAG’s usual SUV recipe.

As for the rear end, the taillights draw inspiration from those used by the latest Tiguan, and are joined by a chrome bar running along the entire width of the trunk lid. We also notice the ‘V6’ badge which denotes the prototype was likely using a 3.6-liter V6 unit. In the U.S.-spec Passat, the mill develops 280 horsepower (209 kilowatts) and in the new high-riding model will be linked either as standard or optional to a 4MOTION all-wheel-drive arrangement.

Stepping inside the cabin, it’s once again the usual VW affair, with many of the bits and pieces sourced from other models and slightly modified for the new model. Oddly enough, the front seats are wrapped in white leather whereas the rear bench has a chocolate brown finish. Legroom in the back appears to be quite generous and you’ll notice the prototype was ready to accommodate a rear-seat entertainment system with connectivity ports for dual tablets on the back of the front seats.

Riding on the MQB platform, the new seven-seat SUV is expected to be unveiled in production guise in November at the Los Angeles Auto Show. The version destined to be sold in North America is going to be assembled starting late this year at the company’s factory in Chattanooga, Tennessee.