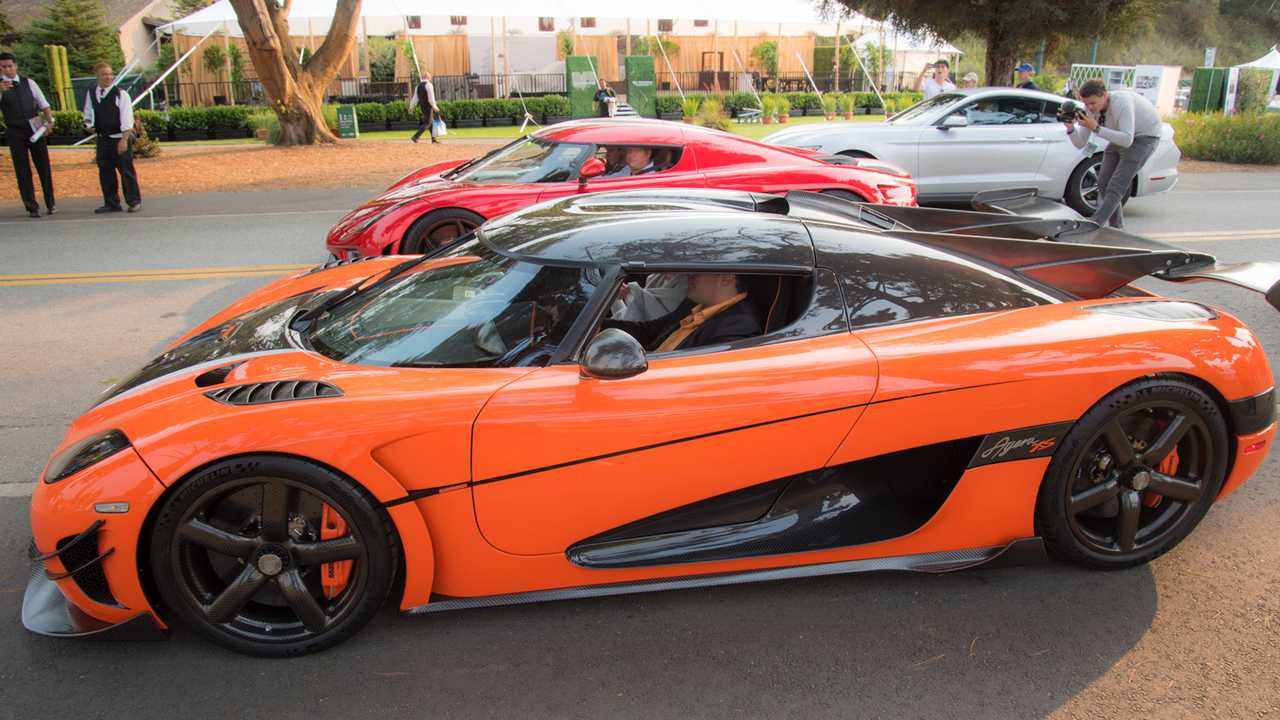 The Agera will park alongside a Lamborghini Veneno, and a one-off Pagani Huayra.

The Ferrari LaFerrari, Porsche 918, and McLaren P1 are often considered to be the ‘Holy Trinity’ of supercars. Each one commands millions of dollars and is able to exceed speeds of 200 mph (321 km/h). But if you ask multi-millionaire Kris Singh what his idea of a supercar trinity is, it's even more exclusive than that.

Complimenting his $4M Lamborghini Veneno, and his one-off Pagani Huayra “La Monza Lisa,” the investment banker was introduced to his one-of-a-kind Agera XS this past weekend at Pebble Beach. It’s the first time a Regera RS has been homologated for use on U.S. roads, and was flown directly from Koenigsegg headquarters in Angelholm, Sweden, for the event.

Of Singh's collection, the Agera XS is the most powerful. It features a 5.0-liter biturbo V8 and 1,160 horsepower (865 kW). It’s rarer than both the Lambo and Pagani as well, being the only street-legal Agera RS in the U.S. (not including the One:1).

But before the new owner takes possession of his one-of-one Koenigsegg, the Agera XS will return to Sweden to go through some final tests, both on the road and on the track. From there, it will head to its new home in Miami, Florida.

We’ve been at Monterey Car Week all this week, showing off both the Agera XS and the Regera to customers and automotive enthusiasts at McCalls Motorworks Revival and The Quail Motorsports Gathering.

We only do two external events per year as a company. One of them is the Geneva Motorshow. The other is Monterey Car Week. Koenigsegg cars appear at other events such as Goodwood, Salon Prive, and the New York Auto Show, but those events are generally organised by our local dealers in the area, with Koenigsegg providing vehicles and other support.

Geneva is crucial for us as both an industry event and a public/customer event. It’s a chance to get our industry news to the world during the biggest show on the automotive calendar.

Monterey is crucial to us as a customer outreach activity. It’s a chance for us to connect with our US-based customers in a comfortable setting, in a truly beautiful part of the world. We get to know them and their family a little better through tours of the vehicles, test drives, over meals together and via conversations that can last for hours, in some cases.

It’s been a very busy week for our Monterey team, but also very satisfying. We’ve met a LOT of people and, hopefully, we’ll have added a few new customers to the Koenigsegg family, too, when all is said and done.

Koenigsegg is re-entering the US market with both the Agera and Regera models and there’s a genuine appetite out there to see the cars first hand, and to learn about the amazing performance and value that Koenigsegg cars offer.

It’s certainly been interesting to see a greater awareness about Koenigsegg amongst visitors to Monterey. Last year, we were doing basic introductions as to who we are and what our cars could do. This year, thanks to online film such as Apex, Jay Leno’s Garage and our own promotional activities, we noticed a much greater awareness among visitors to the Koenigsegg stand.

McCalls Motorworks Revival takes place at the Monterey Jet Center and poses the best in automotive with the best in personal aviation. The event starts at 5pm and it’s quite spectacular to watch the skies darken and the displays light up.

Not only did we have the Agera XS and Regera looking amazing on the Koenigsegg stand, we also had the support of two of our customers who bought their CCX and Agera R to the event for display.

Patrons at the event are free to inspect all vehicles up close and personal – both cars and jets. There were many who asked about the price of the Regera and commented about the decisions they’d have to make between it and the similarly priced Cirrus Aviation jet on display. Desicions, decisions……

There was plenty of food, drink, and entertainment on hand and combined with the truly exquisite machinery on display, McCalls makes for a splendid way to spend an evening.

We will have a full gallery featuring all the interesting vehicles on display at McCalls in the next few days.

The Quail - A Motorsport Gathering

‘The Quail’ is a display held on the manicured grounds of The Quail Lodge and Golf Club, located in Carmel.

The Quail is a much bigger show than McCalls but attracts a similar crowd of car enthusiasts and glitterati. The Koenigsegg stand was busy all day with people wanting to look over both the Agera XS and the Regera.

There was plenty of admiration for the Agera XS, the first Agera RS being homologated for US roads being seen for the first time on home soil in the United States. Both fans and potential owners were in awe of the finish and the attention to detail that went into building this car, with plenty of comments about the Karosserie Orange paint finish, the clear carbon feature down the middle of the car and the customised front and rear aerodynamics.

With the Agera RS already sold out, however, there was also a lot of attention paid to the only model we have for sale at the moment – the Koenigsegg Regera.

We had hundreds of conversations through the day about the cars, including quite a few encouraging expressions of interest from owners of some quite revered modern hypercars. The expressions on their faces when we took them through the performance capabilities of our cars were priceless. “Really?” was quite possibly the most commonly used word of the day. A number of those visitors were back today (Saturday) for a short personal tour of the Regera to experience the car for themselves.

Christian and Halldora von Koenigsegg were both on hand as part of the Koenigsegg team at Monterey and as usual, Christian was indefatigable, talking with people and posing for photos all day.

Kris Singh, the owner of the Agera XS, was on hand to see his car for the first time in daylight and it’s fair to say he was pleased. Kris was intimately involved in every step of this car’s custom design and development. It’s very much a reflection of his personality and you couldn’t had wiped the smile off his face if you’d tried.

If you could pull one highlight from an event like The Quail, it’s typically what happens at the end of the day. There’s a lot of excitement during the day as people discover our cars for themselves, often for the first time. The really palpable excitement comes later, when we move the cars off the stand and get them ready for transport.

The carspotters who are fortunate enough to attend The Quail gather and wait for the cars to be started and driven off the stands. They follow every move, often moving together as a pack to capture the best shots to post to the internet – just minutes later, in some cases.