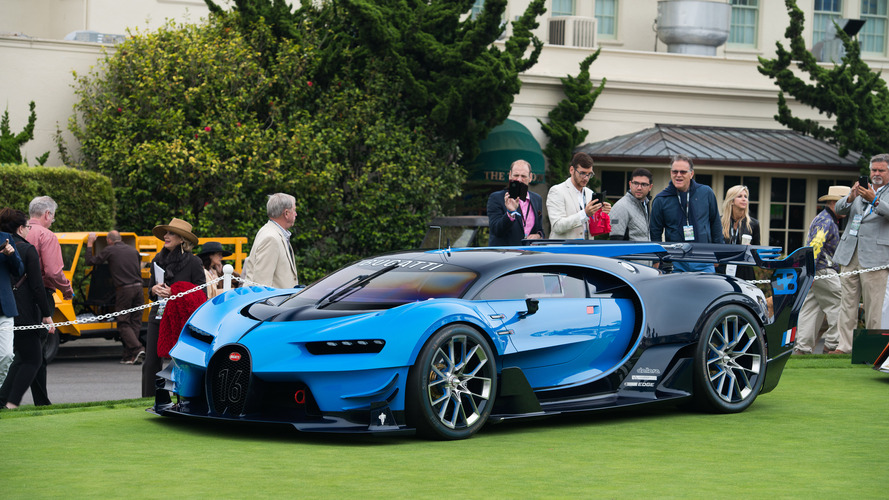 A melange of classic beauties and futuristic concepts with a dash of iconic race cars.

Motor1 had a strong team attending the Monterey Car Week, bringing you all of the relevant info and pictures of the multiple events that offered something for everyone. For those who may have missed it, here's a recap.

Friday’s Tour d’Elegance was the perfect gathering for a multitude of cars spanning across several decades, from vintage Bugattis and BMWs to exotic beauties such as the always lovely Lamborghini Miura. Our favorite was an early 1970s AMX/3, but there were other interesting cars cruising towards Pebble Beach, including some open-top Ferraris and the reputable BMW 3.0 CSL.

As for the Concours d’Elegance, the action started early in the morning with the Dawn Patrol when the concours entrants drove their prized possessions onto the lawn for everyone to enjoy. It was a chilly and cloud Sunday morning, but the parading cars were certainly worth the effort of getting up early in the morning to snatch up a good viewing spot.

The mesmerizing 1936 Lancia Astura Pininfarina Cabriolet stole the Concours d’Elegance show. With curved side glass and a power roof, the unique car wowed everyone and took home the ‘Best in Show’ award. But the bespoke Lancia was only the icing on the cake, with many other cars on the Monterey grass. We have compiled a mega gallery of the impressive collection which among others includes some original Ford GT40s as part of the model’s 50th anniversary celebrations.

Besides classic and vintage cars, the festivities also included the annual Pebble Beach Concept Lawn which aside from a variety of concepts it also brought together several road-going Rolls-Royces and McLarens to spice things up.

The Quail, a Motorsports Gathering

It was the venue to check out some purebred race cars joined by road-going supercars to offer a perfect blend of performance and jaw-dropping styling. BMW decided to celebrate its centenary with a massive gathering of retro-flavored Z8 roadsters, joining a variety of other high-end automobiles from various marques. You can check out the most important cars in our extensive gallery showing the show’s highlights.

There were quite a lot, actually. Notable mentions include the sold-out Lamborghini Centenario Roadster and two equally fantastic concepts: Vision Mercedes-Maybach 6 and Cadillac Escala.  Singer was also there to show off a gorgeous 964 Targa, and BMW gave its 2002 Hommage concept a new livery.

Exotic supercar maker Koenigsegg also attended the show to present the Agera XS serving as a special edition of the already mind-blowing Agera RS. For something perhaps even more exotic, Ferrari Enzo designer, Ken Okuyama, decided to stop by and present its Kode57 speedster equipped with a beefy 6.0-liter V12 delivering 611 horsepower and 448 pound-feet.

During the weekend, a lot of records were taken down during RM Sotheby’s sale. For example, a 1955 Jaguar D-Type which fetched $21,780,000 is now the most expensive British car to ever be sold at an auction. The very first Shelby Cobra managed to establish the equivalent record for an American car, with the final bid standing at $13.75M. On top of that, a 1939 Alfa Romeo 8C 2900B Lungo Spider by Touring was sold for $19.8M, setting a new auction record for a pre-war car.

With the Bavarians celebrating their 100th anniversary, they obviously put on quite a show during the weekend. The 2016 Rolex Monterey Motorsports Reunion gathered both old and new track-only cars. A total of 64 cars were on display, including a BMW-powered 1996 McLaren F1 GTR. For fans of the marque, the BMW Living Legends Garage was the perfect opportunity to have a look at some of the most important models throughout the company’s history.

But it wasn’t all about BMWs. Arch German rivals Mercedes-Benz and Audi were also represented during the Legends of the Autobahn event. The company with the three-pointed star logo had a few pre-war cars on display, while the folks from Ingolstadt brought some of their hot cars, including the S4, RS4, RS4 Avant, and an S5.

As for the Rolex Motorsports Reunion, it was organized on the infamous Mazda Raceway Laguna Seca where enthusiasts had the opportunity to see live in action a variety of rare classic race cars in their natural habitat.

Last but not least, the McCall's Motorworks Revival at Monterey Jet Center was a rare occasion to see Genesis G90 sitting next to a Ferrari Enzo. Some Singer-tweaked Porsches, along with special motorcycles and a tricked-out Toyota Camry were all part of the varied exhibition.