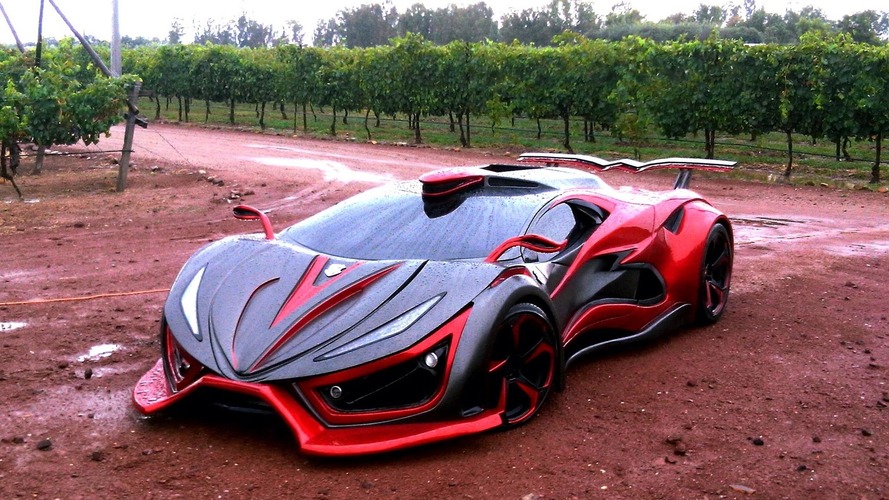 The Alien-like machine will land on Earth later this year.

They say beauty is in the eye of the beholder, and while that statement may be true, the Inferno is far from being what we would call a beautiful car. We find the Inferno’s body overly busy and it gives us the impression of a kit car designed by a kid after spending countless hours customizing cars in Need for Speed. While to some it may seem like nothing more than vaporware at this stage, the Inferno is apparently a real thing and will enter production before the end of the year, according to the company’s marketing director, Manuel Llaguno.

Although developed in Mexico, the supercar is actually going to be built in Italy and the first eleven cars will be a ‘First Edition’. Eight of those have already been pre-sold at an estimated €1.9 million (about $2.14M). More expensive than a Lamborghini Centenario Coupe, the Inferno will be motivated by a biturbo V8 engine coming from a ‘very important manufacturer.’  The mill is said to deliver a whopping 1,400 horsepower (1,044 kilowatts) and 1,125 pound-feet (1,523 Newton meters) of torque, enough to enable the car hit 60 mph (96 kph) from a standstill in less than 2.7 seconds before maxing out at more than 245 mph (394 kph).

It’s going to tip the scales at less than 1,200 kilograms (2,645 pounds) thanks to its ‘metal foam’ body providing a protection comparable to B4 armored cars. The body’s construction will make use of a zinc-aluminum-silver alloy which will be able to stretch up to 100 times its size to absorb impacts, without losing any of its properties. Inferno says the car’s body parts will be durable enough to withstand the impact of a collision, thus allowing owners to simply reuse them after the accident.

While it all sounds very impressive, we will reserve our final judgment for the first actual production car. Until then, it's up to you folks to decide whether the people behind the Inferno project deserve the benefit of the doubt. Who knows, maybe we're in for a big surprise, although we wouldn't hold our breath for it.