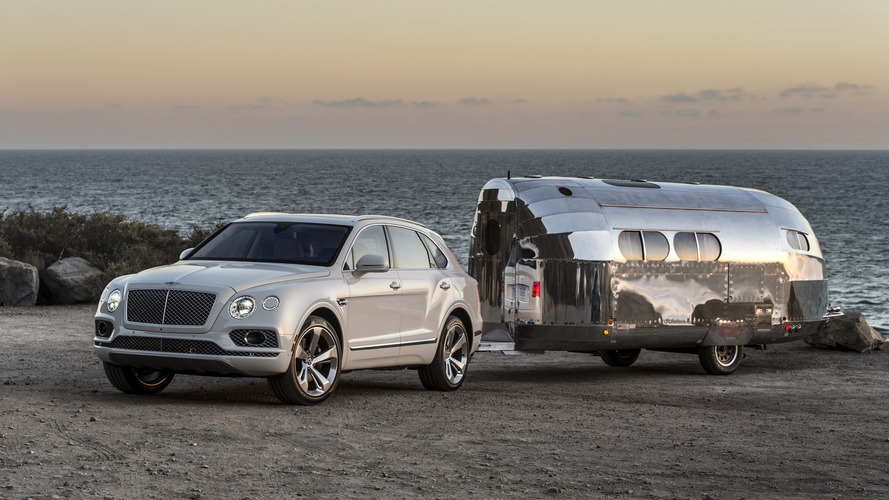 A tow bar is going to be available as optional equipment, representing a first for Bentley.

After introducing the ‘ultimate angling accessory’ about a month ago, Bentley is now ready to expand the options list for its super-luxurious Bentayga SUV with the addition of a tow bar. It’s actually the first time in the company’s 97-year history when a model receives this type of equipment which will be demonstrated at the Monterey Auto Week.

It’s interesting to see the plush SUV with a tow bar, but it pales in comparison to the extravagant Mulliner Tourbillon self-winding clock available for a whopping $160,000. To our knowledge, it’s the most expensive option in the business, and we would be curious to find out how many owners actually tick (pun intended) that option's box taking into account the standard model is already very expensive at $229,100.

Getting back to Pebble Beach, the Mulsanne Extended Wheelbase and Flying Spur V8 S will both be there to celebrate their U.S. debuts and will share the spotlight with the Continental GT Speed Black Edition, representing Bentley’s most powerful production car ever.

Besides current Bentley cars, there are also going to be a number of vintage models set to be auctioned by RM Sotheby’s. The most valuable of them all is a 1932 Bentley 8-Litre Tourer by Vanden Plas estimated to fetch as much as $3 million. Another model with a high pre-auction estimate is the 1954 Bentley R-Type Continental Fastback Sports Saloon in left-hand-drive layout which according to the auction house is worth up to $1.7 million.

(Pebble Beach, 16 August 2016) The most luxurious Bentley model ever, – the Mulsanne Extended Wheelbase, makes its US debut at the Monterey Auto Week.

The pinnacle luxury limousine is designed for those who prefer to be driven, and provides a first class air-travel experience for the road. The Mulsanne Extended Wheelbase will be appearing at the Quail: A Motorsports Gathering on Friday 19 August, and will also be in position on the Concept Lawn at The Lodge on Sunday 21 August.

The newly launched Flying Spur V8 S also makes its US debut at Pebble Beach. Taking its place between the Flying Spur V8 and flagship W12 in the range, the V8 S is tuned for power and performance, with increased engine output and revised suspension offering a more focused, precise driving experience.

The most powerful production Bentley ever, the Continental GT Speed Black Edition, will also be in attendance throughout the event. The revised Continental GT Speed raises the bar even further in terms of exclusivity and performance, delivering a top speed of 206 mph (331 km/h) and even more power and torque.

For the first time in Bentley’s 97-year history a tow bar has been created as a lifestyle option for the Bentayga and will be in action at Monterey Auto Week.

A Bentayga will ‘draw’ a Bowlus Road Chief to Turn 10 at the Laguna Seca circuit, where the Bentayga-Bowlus tandem will be the feature of a brand display. Bowlus Road Chief is a California-based company which specializes in hand-crafted, light-weight luxury trailers.

The Bentayga will also be partnered with the Bowlus Road Chief – Limited Edition Lithium+ trailer at the Quail and at the British brand’s Pebble Beach Signature Party on Saturday night.

Michael Winkler, President and CEO, Bentley Motors, Inc. said: “The Monterey Auto Week always sees a remarkable gathering of Bentley customers and enthusiasts, and is a great occasion to celebrate the past and present of this iconic brand. We are fast approaching our centenary in 2019, and our newest vehicles on display at Pebble Beach this year point to an extraordinary future.”

Heritage on Display at Prestigious Auctions

Bentley’s illustrious heritage will be on display during the various auctions at Pebble Beach and on the lawn at the Concours d’Elegance.