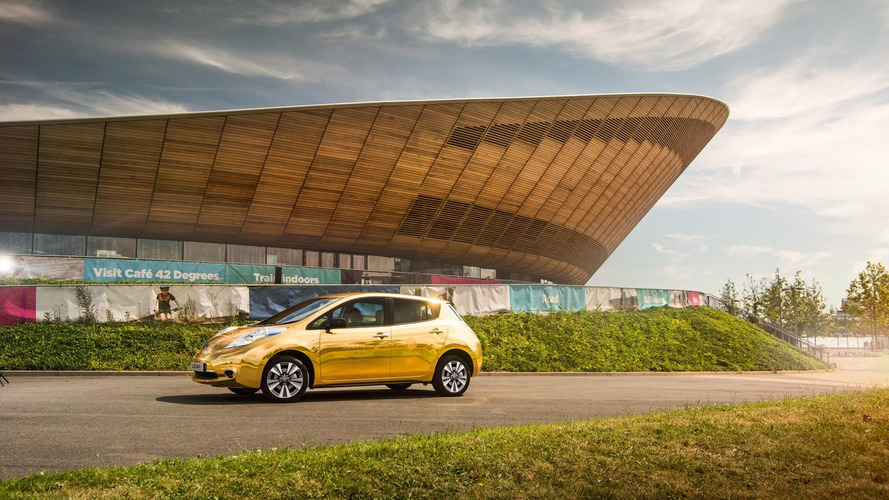 All gold medal winners from U.K.'s team will get a gold-wrapped Leaf.

About four years ago, Nissan teamed up with Usain Bolt for a one-off GT-R featuring a gold exterior which was auctioned for $193,191 to support the Usain Bolt Foundation. Now, Nissan has decided to apply a similar finish to its all-electric Leaf hatchback and give the car to Olympic gymnast Max Whitlock as a reward for securing gold on the floor and pommel horse last Saturday during Rio 2016.

He will receive the keys to the Leaf wrapped in ‘brilliant bright gold’ upon his return in United Kingdom from the games. Nissan mentions all athletes from the Nissan Team GB and ParalympicsGB teams returning home from the Olympic Games in Brazil with a gold medal are going to get an identical gold Leaf, but only one car per athlete.

Nissan has to prepare a significant amount of gold wrap taking into account U.K. already has a total of 16 gold medals, securing second place in the standings after U.S. which has 26 gold medals so far, and ahead of China with 15 medals.

Winning a gold medal at the Olympic Games is an amazing achievement in its own right, but a brand new zero-emissions car makes the victory taste that much sweeter and gives the athletes extra motivation.

Nissan takes Whitlock celebrations to the Max with gold LEAF

The Nissan ambassador made headlines around the world when he took two gold medals – securing gold on the floor and pommel horse – on what has been dubbed ‘Sensational Sunday’.

In recognition of his astonishing achievement, Nissan will now present him with the keys to a LEAF completely wrapped in brilliant bright gold – on his return to the UK.

Nissan Team GB and ParalympicsGB athletes returning from Rio with a gold medal will be presented with a gold Nissan LEAF, making it one of the most limited edition Nissan models ever.

Nissan is the official automotive partner of Team GB and ParalympicsGB and has been delighted by the success of its other competing ambassador athletes so far, including first gold LEAF winner - rower George Nash, for his win in the men’s coxless-four.

Chris Marsh, Marketing Director at Nissan Motor (GB), said: “Max has been a Nissan ambassador since we first launched our partnership with Team GB and so many of us at Nissan have had the pleasure of working with him and getting to know him as he prepared for the biggest sporting night of his life.

“We are all so proud to have him associated with Nissan and he’s the perfect person to be a recipient of one of our gold LEAFs."

Nissan ambassador Sir Chris Hoy, launched the Gold LEAF campaign announcing that all Nissan sponsored athletes who win a gold medal at the Rio Games would be rewarded with a special gold wrapped all-electric Nissan LEAF upon their return from Rio.*

One of the gold wrapped Nissan LEAFs is on display at the Nissan Innovation Station at The 02.

* Only one Nissan LEAF will be gifted per Nissan gold medal winner, regardless of the number of gold medals won.