VW Teramont spied almost ready for its debut later in 2016 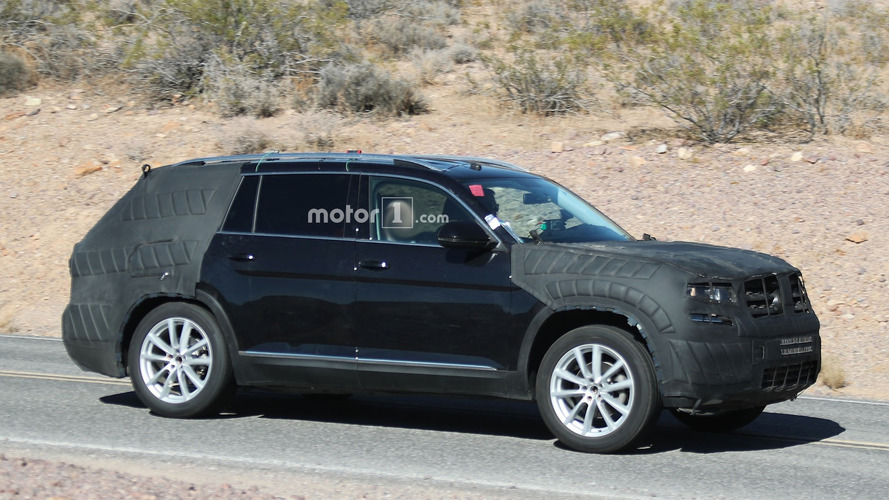 Even through the camouflage, we see obvious cues from the CrossBlue concept.

Volkswagen’s engineers are hard at work performing hot-weather testing on upcoming vehicles in Death Valley, and this fresh set of spy photos shows the evaluations on the brand’s forthcoming three-row crossover. VW of America has the honors of naming the big CUV, and Teramont is reportedly the division’s favored moniker for it.

This one wears camouflage at the front and rear but middle is bare. The crossover takes major styling cues from the CrossBlue concept, especially the boxy proportions and slab sides. These photos also give us a glimpse inside. While it’s hard to spot many details, a large navigation screen occupies a lot of real estate on the center stack.

VW’s three-row crossover is only for the North American market – at least at first. It shares the MQB platform with many other VW Group products, which means a transverse engine up front. The most likely powerplant is the 3.6-liter V6 from the U.S Passat with 280 horsepower, and 4Motion all-wheel drive would be option – possibly even standard equipment. There are also rumors of the brand’s 2.0-liter turbocharged four-cylinder in the powertrain lineup and perhaps even a hybrid later.

The big crossover goes into production in Chattanooga, Tennessee, by the end of the 2016, and sales would begin in 2017. Expect it to debut at an auto show sometime this year. November’s event in Los Angeles is a likely choice.