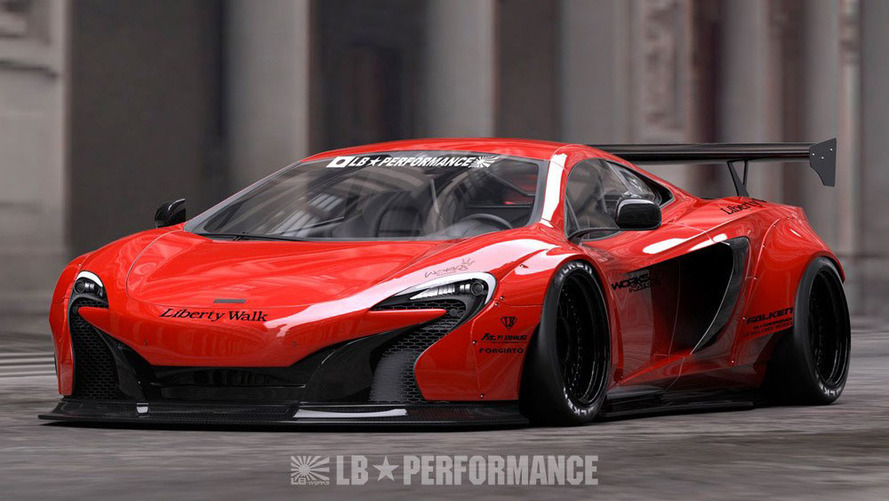 Liberty Walk knows how to turn a vehicle's design up to 11.

If you own a McLaren 650S and feel the coupe looks too boring, many people would probably question your opinion. However, the Japanese tuner Liberty Walk can also assuage your concern of driving a frumpy supercar by offering a new body kit that pumps up the McLaren to cartoonish proportions.

Judging by Liberty Walk’s other work, the stylists there have a deep love of wide fenders, and the firm’s kit bolts some of the biggest haunches possible onto the 650S. The company says the coupe looks more like the GT3 racer after these parts’ installation, but the competition version actually might be more understated.

To match the exaggerated look, Liberty Walk also offers a new bumper and diffuser at the front with massive mesh grilles. Wider side sills also help balance the brawny fenders. At the back, the firm lets owners add a new fascia, diffuser, and wing.

650S owners still have a little time to decide whether to give their coupe such a swollen look because the kit is not available until mid-September. However, Liberty Walk is taking pre-orders now for those folks that really dig this intense design.

Proving that it's nothing if not on the pulse when it comes to the latest releases in the constantly evolving, fast paced world of supercar modification, Liberty Walk has just pulled the covers off its latest bodykit, one custom designed for the equally new McLaren 650S. Joining the firm's infamous range of extreme body styling solutions for the most exotic cars money can buy, the Liberty Walk kit has been custom designed to fit the Woking wonder-car perfectly, and will lend any 650S it's fitted to an added shot of aggression!

Following in the footsteps of their incredibly successful offerings for cars as diverse as the BMW M4 and the Lamborghini Hurracan, the Liberty Walk McLaren 650S bodykit is certainly not for the faint hearted, as it has the ability to utterly transform the look of this already striking looking machine. Available in two distinct forms designed to make the kit accessible to as many people as possible, Liberty Walk's 650S kit can be specified in either fibre-reinforced plastic (FRP) or carbon fibre reinforced plastic (CFRP). The kit features massive arches, front and rear bumpers, front, rear and side diffusers, a rear wing, and, as an optional extra, a stunning dry carbon fibre wing. The sum total of these additions is nothing short of jaw-dropping, with Liberty Walk equipped cars bearing more than a passing resemblance to the recently launched 650S GT3 racer, making it ideal for those more motorsport-minded owners.

While Liberty Walk recommends owners fit the full kit for maximum visual effect, a number of the kit's key components are available separately, with customers able to select the bumpers, wings and diffusers alone if they so wish, all available in either FRP or carbon. The open-ended nature of the Liberty Walk kit gives owners scope to create a truly personal, utterly unique 650S.

Both the GRP and carbon reinforced versions of the kit embody all that's great and good about Liberty Walk, and both have been painstakingly developed to fit the Kiwi Ferrari-botherer precisely, accentuating its arches and aggressive styling traits. The complex design process employed in the creation of all Liberty Walk products ensures that fitment should be a straightforward affair for any trained bodyshop, while the end result is all but guaranteed to stop traffic and draw admiring glances left right and centre.

The Liberty Walk UK McLaren 650S kit is due for release midway through September, though the firm is already taking pre-orders from eager owners keen to bag one of its most extreme offerings to date.