Behind the scenes with the Ford Focus RS RX rallycross car

Ken Block and Andreas Bakkerud show off their 600-horsepower toys.

This isn’t anything like a regular Ford Focus RS. It’s dripping in carbon fiber, reaches 60 miles per hour in 1.9 seconds, and has a giant wing on the hatch. This is the brand-new Ford Focus RS RX, a car specifically designed to compete in the FIA World Rallycross series. I’m hanging out with Ken Block and his team at the Canadian round of the 2016 championship – the first time that the Focus RS RX has run publicly in North America.

The car is run by Block’s Hoonigan Racing and U.K. motorsports wizards M-Sport, with extensive technical support from Ford Performance in Michigan. Though it uses the same body shell as the street-legal Focus RS, the new RS RX is more extreme in every way. It’s the first year the car has competed in World Rallycross, and Block – as well as 24-year-old teammate Andreas Bakkerud – has exclusive rights to race the car for two years before it’s offered to other teams. 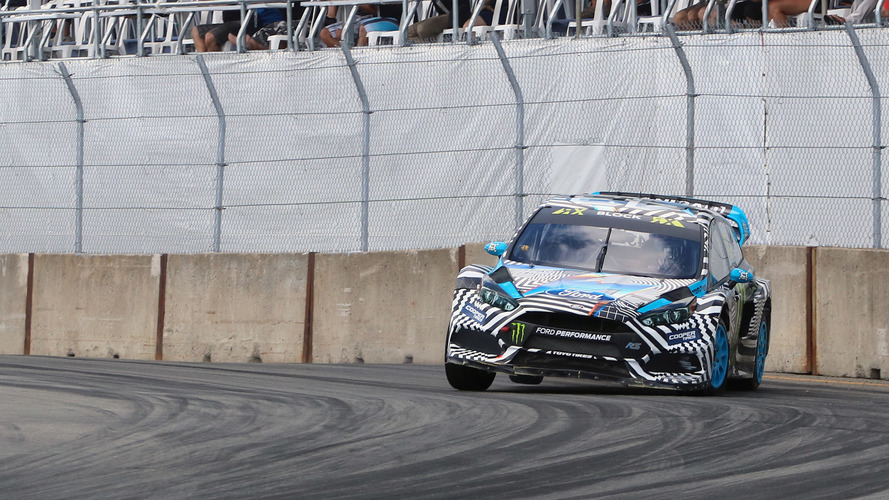 Because World Rallycross involves tracks that are only partly paved (the Canadian track was 59 percent tarmac and 41 percent dirt), the cars are a hybrid between rally cars and touring cars. Yet because the rulebook is relatively loose compared to some other race series, M-Sport was able to go wild with the car’s design and performance levels. Development on the Focus RS RX was an international project, with the car’s actual build taking place at M-Sport’s facility in the U.K., but with major technical input from Ford Performance. M-Sport received a standard Focus RS body shell and then built almost everything else from scratch; Ford Performance led development of the engine, aerodynamics, and suspension.

Under the hood is a turbocharged 2.0-liter inline-four making 600 horsepower and 663 pound-feet of torque – even though the aluminum engine is required to use a 45-millimeter (1.8-inch) restrictor. A six-speed sequential transmission distributes power to the all-wheel-drive system. Unlike the Focus RS street car’s clever torque-vectoring setup, the rally car has a purely mechanical AWD system; there are no computers metering output to different wheels depending on traction levels.

With that much power in cars that have a series-mandated minimum weight of 2,866 pounds (including the driver), acceleration is explosive.

“Honestly every time I launch and go through the gears, there’s a big smile on my face because it’s so much fun,” says Block, who drives the #43 Focus RS RX. 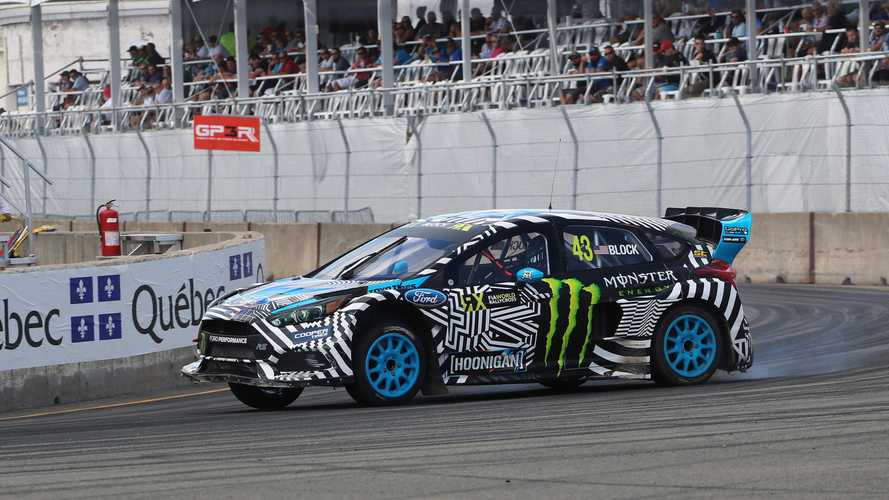 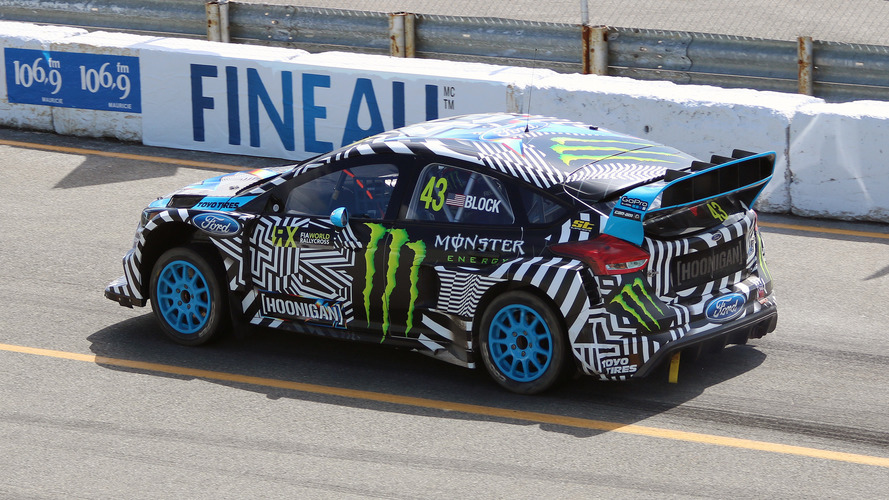 His teammate, Bakkerud, agrees: “To be honest we have too much horsepower to do a good launch.” No launch control is allowed, but the cars have a special launch mode that adjusts the engine rev limiter and anti-lag system (which keeps the turbocharger spooled) for ultra-fast standing starts. Despite that prolific acceleration, top speeds aren’t all that fast. Bakkerud says he usually tops out at about 202-203 km/h, or 126 mph, depending on the course.

The suspension has to work double duty, keeping the car planted and stiff on the tarmac stages while still soaking up the rough terrain of the dirt sections. The Focus RS RX has about 9.4 inches of rear suspension travel, says Ford Performance motorsports engineer Han Kim, to cope with the huge compression after the tracks’ jumps, but it’s more like a road-racing suspension that an off-road machine.

As with any race car, the Focus’s interior has been stripped to the bare essentials, and packed with safety gear like a roll cage, racing bucket seat, and quick-release steering wheel. And of course, there’s a giant lever for the hydraulic handbrake. 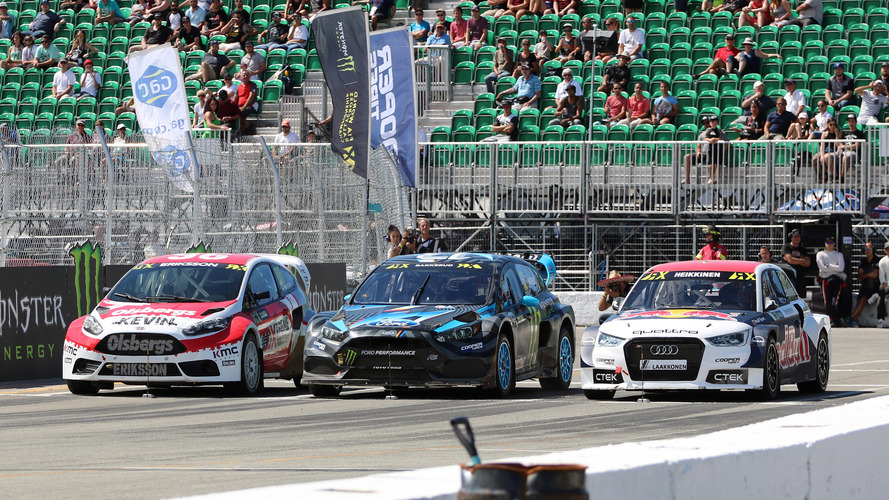 M-Sport received a standard Focus RS body shell and then built almost everything else from scratch; Ford Performance led development of the engine, aerodynamics, and suspension.

“The handbrake, we’re often on,” says Bakkerud. “It’s crucial in rallycross” for initiating drifts or negotiating hairpin turns. And when he’s not on the handbrake, he’s on all three pedals as much as possible: “It’s a lot of left-foot braking.”

The racy steering wheels have buttons for controlling things as elementary as the car’s windshield wipers, but also for manipulating engine functions like the anti-lag system. If he’s leading the race, for instance, Bakkerud says he might turn down the ALS to improve his smoothness; if he’s fighting his way through the pack, ALS goes to maximum so he can catch up.

Bakkerud and Block are also regularly on the radio to communicate with their spotter, a team member perched high above the track who provides advice about race strategy. The spotter also is responsible for deciding when each driver should take a “joker” lap. Once per race, each car must take an alternate route called the “joker” that adds about three seconds to the lap time; failure to do so results in huge penalties. It’s a way of adding strategy to what are otherwise extremely short races. (The similar-but-different Global Rallycross series, meanwhile, also has joker laps – but, confusingly, they’re a little shorter than regular laps.) 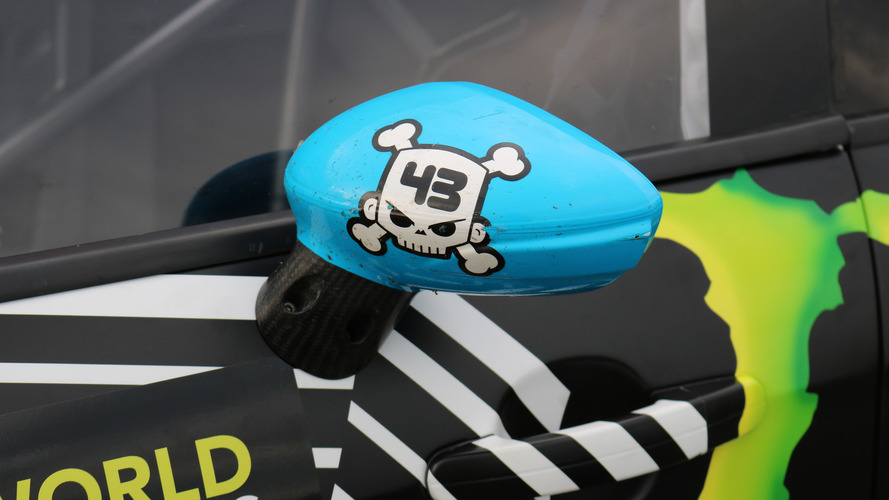 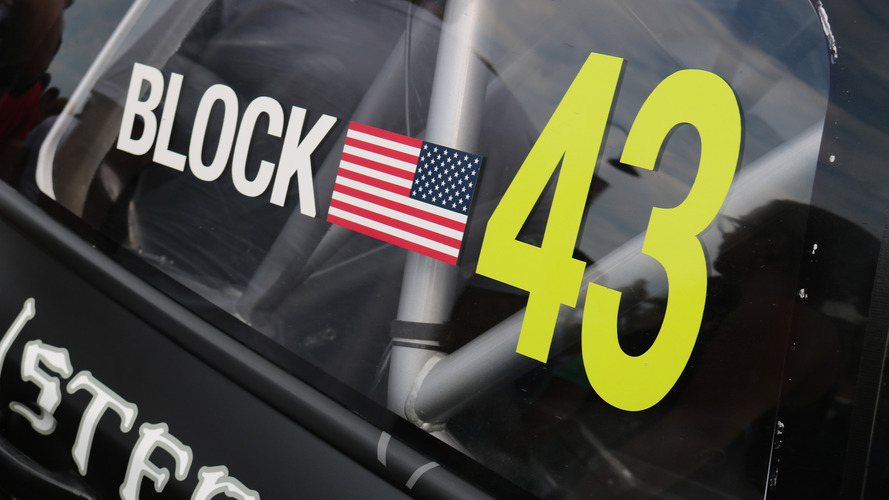 Haven’t I Seen You Somewhere Before?

Despite the emphasis on high-performance racing parts, Ford still wanted the RS RX to remind fans of the Focus RS (and ST) they can buy in showrooms. After all, the rules require that the car has at least a passing resemblance to the model it’s based on.

“The rules kind of require that it look like a production car,” says Brian Novak, Ford Performance supervisor. “But it’s certainly a little more advanced.”

Flared carbon-fiber fenders provide clearance for wider wheels and tires, while a new front fascia and an impressive carbon-fiber rear wing provide downforce. How much? Ford won’t give an exact number, though it’s a little less downforce than is offered by the company’s World Rally cars.

“The key thing is we want to make as much [downforce] as possible,” says Nolan Halliday, Ford Performance aerodynamics engineer. “Traction is king. Does the last two-tenths come from a little bit of downforce?” 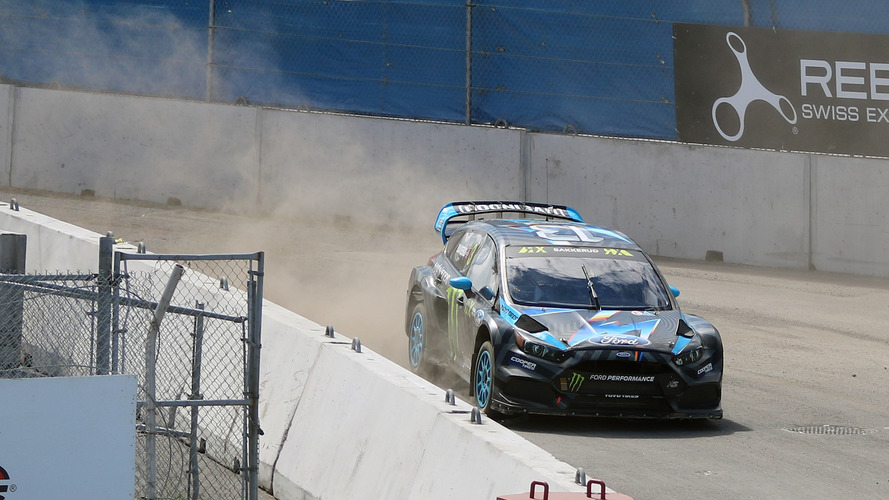 The race organizers also only allot eight tires of each type (dry or wet) per car per weekend.

The aerodynamics work also involved making sure the car stayed cool enough on full-bore rallycross runs. The radiators are mounted in the back, to keep the front-mounted intercooler from heat-soaking; enormous vents and intakes under the hood help feed the 2.0-liter engine’s massive thirst for air and also chill the intercooler.

It’s not simply enough to build the car to perform well once, though; it has to be able to endure a full season of often full-contact racing. The Focus RS RX is designed for durability and for easy repairs. The entire underside is covered by half-inch aluminum skid plates, for instance, which are tough enough that they can lift the weight of the car – and thus the car can be raised with a simple floor jack. Each car can only use three engines for the whole season, too, so engineers must strike a careful balance between eking out more power and making the motor last. At the same time, the fact that Rallycross races are relatively short means components often break before they wear out.

“You don’t life-out a lot of parts,” says Novak. “It is such a rough sport that you end up replacing a lot of things.”

Drivers regularly break bumpers and suspension parts, so the team brings “enough [spare parts] to rebuild an entire car if you have to,” he says. The race organizers also only allot eight tires of each type (dry or wet) per car per weekend, so drivers get creative in making the rubber last by rotating and swapping out tires for each of the various qualifying, practice, and finals heats.

“You’re trying to save as much tire for the final,” says Novak. 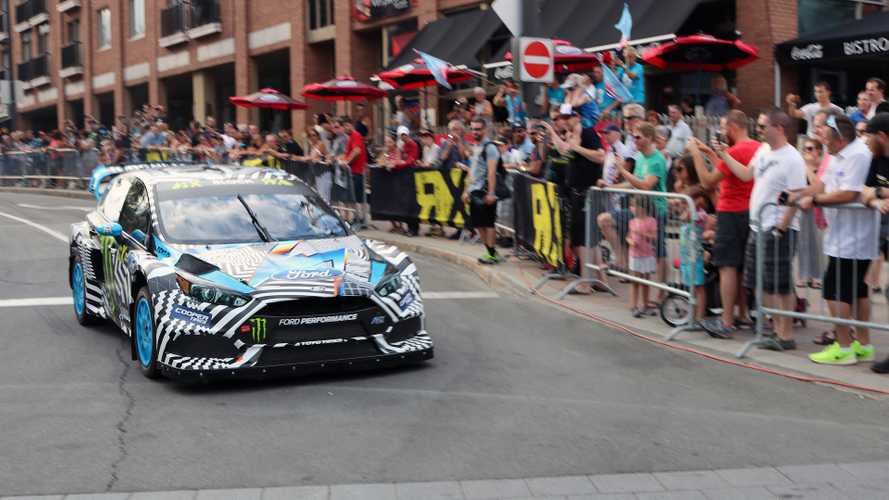 So far, the Ford Focus RS RX has proven a competitive entry in World Rallycross’ top grouping, the Supercar class. There is, however, still room for improvement. With a brand-new car, Block considers 2016 a development year as Hoonigan Racing works out the kinks with the car, and as he acclimates to driving the more tarmac-focused Focus RS RX. Part of the issue, Block says, is that the car was built in just nine months and was only finished right before the start of the season.

“All of our testing and development has literally been done at the race track, which is difficult,” he says. “Overall it’s turned out really, really good, but unfortunately when it’s done in such a quick time frame like that, it’s hard to make it perfect.”

So far, Andreas Bakkerud is running in third place in the 2016 World Rallycross standings, while Block is fourteenth. But the duo still has another five races this year, giving both drivers time to rack up even more points in the Focus.