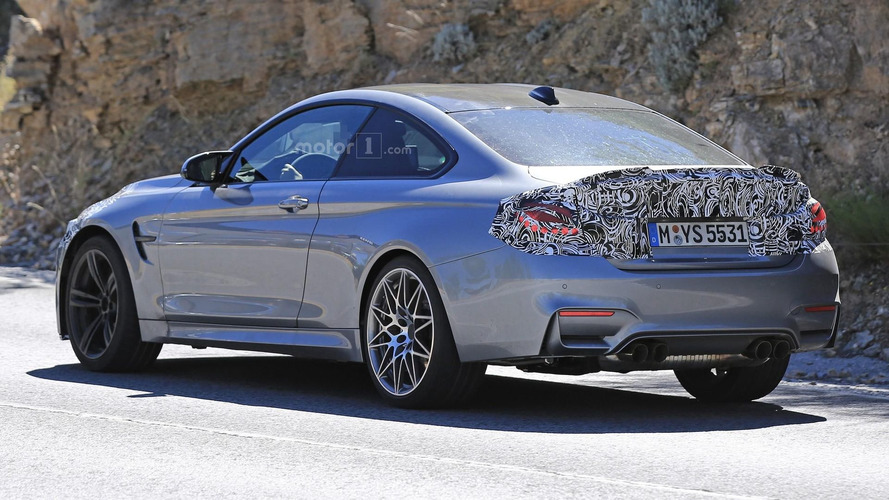 Are those OLED taillights?

With your permission, we shall start with the rear end of the car which we find to be the most interesting. The light amount of camouflage appears to be hiding a carbon fiber spoiler from the M Performance catalog. It has been available for the high-performance coupe since the end of 2014 and serves as an option for those who are not too fond of the stock look, but at the same time don’t want to get the large rear wing launched at last year’s SEMA.

We are tempted to say the taillights are using organic light-emitting diodes (OLEDs), although we can’t be entirely sure. The graphics of the rear lighting clusters remain mostly hidden under the camouflage, but from what we can actually see, the look does seem to resemble the limited-run M4 GTS which comes as standard with OLED taillights.

Up front, the M4 facelift will bring the new full-LED headlights also found in the M3 Sedan LCI and quite possibly a redesigned front bumper in the same vein as the aforementioned M4 GTS of which only 700 cars are being made. Speaking of which, the rear wheels are taken from the sold-out special edition, sans the orange accents. Come to think of it, the exact same alloy wheel design and finish is available in Spain for the M4 Competition Sport which is basically a lesser M4 GTS.

Clear images of the interior are not available, but we do notice the dashboard is camouflaged, so most likely it will adopt the same changes that came with the facelifted M3. In addition, the prototype had a digital display affixed to the windscreen which was probably providing the test driver with relevant info regarding the car’s behavior.

Seeing as how the M3 Sedan did not receive a power bump, it probably means the standard M4 Coupe will continue as well with 425 horsepower (317 kilowatts) and 406 pound-feet (550 newton-meters) from its turbo-six 3.0-liter.

Word on the street says BMW will launch the M4 facelift in March next year, so look for an official reveal by late 2016 / early 2017.