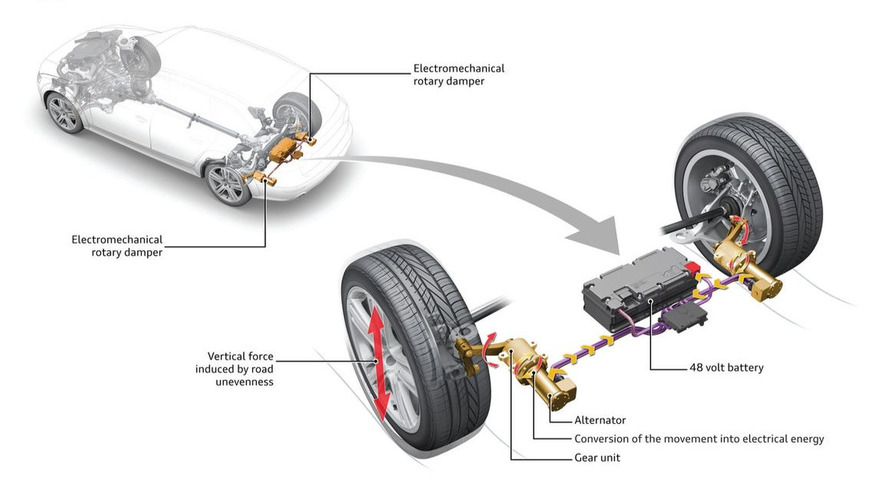 We’ve become used to cars recovering energy through the brakes and exhaust to boost efficiency. But what about the suspension? No matter how smooth the road surface may be, the dampers are constantly moving, generating a lot of kinetic energy. At least, that’s the theory behind a new type of suspension Audi is developing to take advantage of this untapped resource.

Dr.-Ing Stefan Knirsch, Audi board member for technical development explains, “Every pothole, every bump, every curve induces kinetic energy in the car. Today’s dampers absorb this energy, which is lost in the form of heat. With the new electromechanical damper system in the 48-volt electrical system, we put this energy to use.”

Dubbed eROT (electromechanical rotary dampers), the system does away with conventional telescopic dampers. Instead, lever arms connected to rotary dampers absorb the motion of the wheel and transmit it through a set of gears to an electric motor mounted in the rear axle. According to Audi, the system recovered between 3 and 613 watts of energy in testing on various roads, with an average of 100 to 150 watts (the distance over which that was calculated isn’t mentioned). That translates to appreciable fuel savings.

Audi also points out that the system allows near-limitless tuning of the suspension characteristics, as compression and rebound rates can be separated. Audi claims it’s more compact than conventional suspension, too, freeing up trunk space.

The system works in conjunction with Audi’s 48-volt electrical system, as seen on the Bentley Bentayga and Audi SQ7. Audi has indicated that a next-generation 48-volt system will be used as the primary electrical system in the upcoming Q6 hybrid crossover. It will be rolled out across other Audi models in due course; as such, the German automaker says the inclusion of eROT in production models is ‘plausible’.