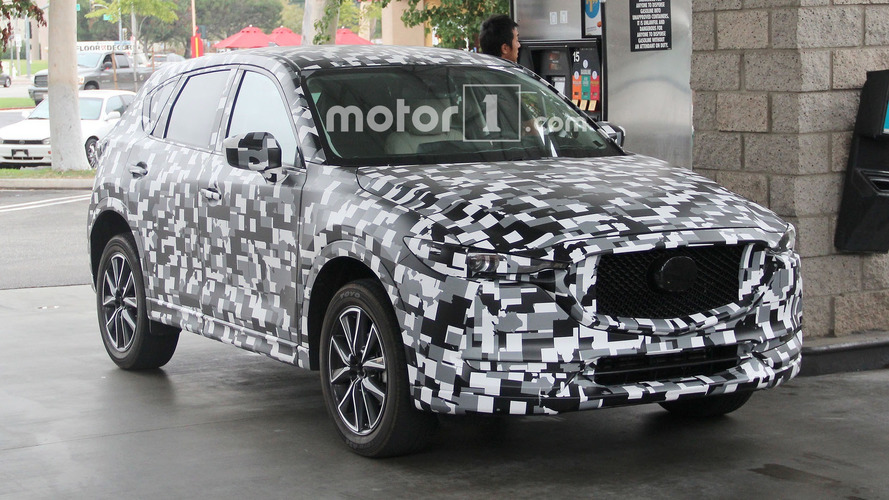 Mazda adapts the sharper styling from its recent crossovers onto this new model.

The highly competitive crossover segment in the United States forces automakers to keep their products fresh to keep up with competitors, and these spy shots reveal Mazda is deep into development of the 2018 CX-5. The new CUV comes hot on the heels of a mild refresh of the current model for the 2016 model year.

Spotted while fueling up in Southern California, the new CX-5 adapts styling cues from the 2017 CX-9 and China’s CX-4. The heavy camouflage can’t hide the narrow headlights and taillights, which look very similar to the parts on the other Mazda CUVs. The rear portion of the roof also appears to have a more pronounced downward slant, which gives the crossover a sporty appearance.

Our spies don’t have any photos of the interior, but you can likely use the latest CX-9 as a guide. The highest trim levels of the brand’s larger crossover include luxurious materials like Nappa leather and Japanese Rosewood. Expect a wide range of available driver assistance systems, which are becoming the norm in this segment.

The available powertrains for the 2018 CX-5 are currently a mystery. The new model might weigh less and have more slippery aerodynamics than the current crossover. If that’s the case, Mazda could improve fuel economy but still use the current 2.0- and 2.5-liter four-cylinder engines. The CUV’s would likely remain front-wheel drive as standard, but all-wheel drive would be optional for buyers in snowy climates.

As a 2018 model year vehicle, Mazda would likely unveil the new CX-5 early next year, but a debut late this year is a possibility, too.