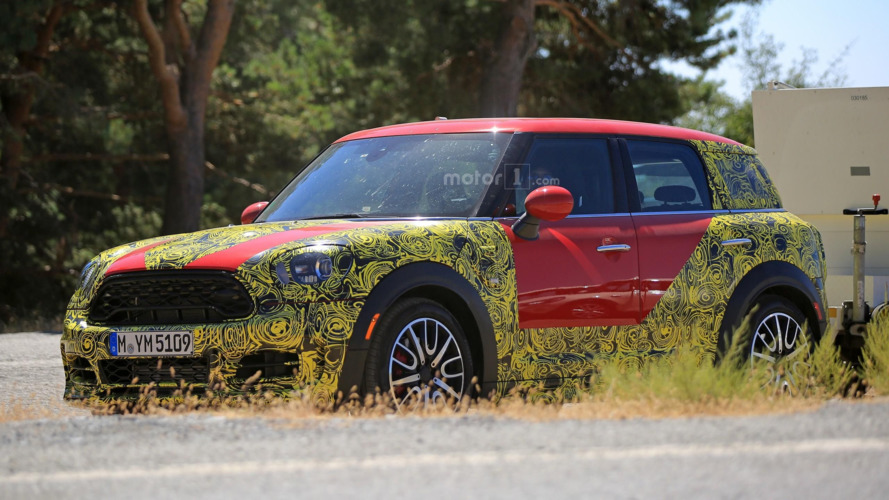 Our spies have spotted a near-production prototype with slightly less disguise.

It was January last year when we posted the very first batch of spy images showing Mini’s second-generation Countryman, and now the model is just about ready to lose all the camouflage. Spied undergoing final testing, the prototype had slightly less disguise than previous prototypes and it was towing a small trailer, something that you don’t get to see so often when dealing with Minis.

More of a maxi rather than a mini, the new Countryman (F60) will be the biggest Mini ever and will adopt virtually the same design as the recent crop of models launched by the brand. The headlights and taillights appear to be bigger compared to what the other cars have, but that’s not really surprising given the significantly larger footprint.

It will also use the same front-wheel-drive UKL platform, so people will be able to select from turbocharged three- and four-cylinder gasoline and diesel engines. The lineup will be topped by a John Cooper Works version which will have a 2.0-liter unit rated at 228 horsepower (170 kilowatts) and (320 newton meters) of torque. A plug-in hybrid version is also in the works, although we doubt it will be available from day one.

Those in need of a grippy version will be happy to hear some of the four-cylinder units will be mated to an optional ALL4 layout and there might even be a rugged derivative turning the Countryman into an “authentic SUV.” A report from a year ago said something about a standard AWD layout and a design inspired by the MINI All4 Racing developed for Dakar Rally, but it’s unclear at this point whether it will actually happen.

By being longer, wider, and a little bit taller than its predecessor, the 2018 Countryman will offer a roomier interior and a more spacious trunk. While the set of spy images isn’t showing the cabin, it is really not that hard to imagine how it will look like since most of the parts will be sourced from the recent crop of Minis. It’s up to you to decide whether that’s a good thing or not.

With the Paris Motor Show opening its doors on October 1, don’t be too surprised if Mini will decide to reveal the new Countryman online sometime in September. It should go on sale before the year’s end or early 2017 in Europe and will likely arrive as a 2018MY in the U.S. of A.