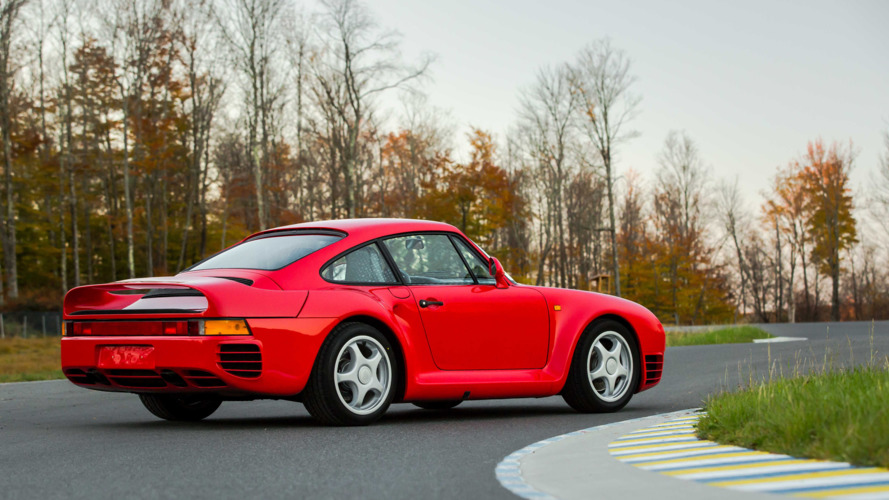 It comes with nearly $30k of service receipts.

When the Porsche 959 was new, government regulations in the United States made them impossible to import, and the supercars gained legendary status as one of the ultimate pieces of automotive forbidden fruit. To the joy of many wealthy collectors in the U.S, enough time has passed that the laws have ceasing being an issue. The 959 is now legal in America, and Mecum as a gorgeous example up for auction during Monterey Car Week. The company expects it to sell for between $1.1 million and $1.3 million.

This 1987 959 in Komfort trim is number 36 of 292 produced and comes in Porsche’s famous Guards Red with a Triple Gray interior. The 2.8-liter biturbo flat six with 444 horsepower looks like a sculpture in the back. A five-speed manual routes power to a sophisticated all-wheel drive system. The suspension features adjustable ride height and damping from controls in the cabin – a cutting edge feature in the late ‘80s.

A German owner took delivery of this 959 in October 1987 and added a McIntosh sound system with CD player at around that time. It’s otherwise stock, though. The car comes with the complete tool kit and all the necessary manuals. The sale also includes a binder of service records with nearly $30,000 of invoices, according to Mecum. One receipt in the gallery above shows a receipt for 17,301 pounds ($22,560 at current rates) from late December 2014.

We can’t wait to see how much this 959 sells for in the auction. These supercars are very rare, especially in the U.S, and vintage Porsche prices just keep increasing. Those factors could be a recipe for big numbers from this classic coupe.

With age of the modern supercar upon us, the now legendary Porsche 959 in many ways is truly the genesis for a wide variety of supercar technology that we see today. The 959 was born of a requirement from the FIA for Porsche to build 200 road going units of their 959 Prototype to homologate their efforts in Group B Rally. The 959 represented a first for implementing systems like ABS, adjustable ride height, adjustable suspension dampening, variable turbine geometry turbos, the use of Carbon Kevlar and other composites during construction and even lightweight hollow wheels. All while preserving a fine level of modern comfort.

Soon after the introduction of the 959, it was announced that no cars would allocated to U.S. Customers due to the cars non-conformity with DOT and EPA regulations. This represented a bump in the road for what at the time was the ultimate Porsche. A handful of 959s did make it to the states via Holbert Porsche but remained in the back of the dealerships lot until it was affirmed that the cars would remain illegal and the whole lot were sent back to Porsche in Germany.  It wasn’t until the Show and Display Law was passed in 1999 that a few adamant collectors/enthusiasts like Bill Gates and Paul Allen were able to successfully import examples of the 959. That’s no longer an issue today. With the 25-year exemption now in effect, 959s can be legally imported into the U.S.

This Guards Red 1987 Porsche 959 Komfort on offer is the 36th of 292 production cars, and was delivered new by Porsche Cars AG to its first German owner on October 12th 1987. The 959 continues the tradition like that of other Porsches—a car to be used and enjoyed, reliably so, and without fault. Its interior is heavy on 1980s appeal and feel throughout, consistent with the use of new and modern materials in the rest of the car. This German specification model features a triple grey interior, heated and electrically adjustable sport seats, alarm system and Bridgestone Tires. The only deviation from original specification is the installation of a period correct McIntosh sound system with CD player is the one after-factory addition to this car.

One of the 959s previous caretakers was Tom Hartley Jr., a well-known purveyor of special interest automobiles located in Derbyshire, England. Under Mr. Hartley’s care the car received considerable servicing to bring it up-to-date as a turnkey example. A documented comprehensive work order was carried out at Porsche Cars Reading, UK. These services are part of comprehensive records that include nearly $30,000 worth of invoices to put this 959 in superb order as a ready-to-enjoy, investment grade example.

This is no doubt the time to consider acquiring one of the original 1980s supercar icons before value trends increase to a point that deem this acquisition impossible. The 959 represents the beginning of imaginative innovation, and this rare Porsche will continue to represent a gateway to the start of the supercar era. This is a unique opportunity to acquire an original Porsche supercar, one that is worthy of much consideration.