The world-famous ‘Hoonigan’ on why World Rallycross is so much fun.

Even the most casual car enthusiast knows Ken Block from his ultra-viral “Gymkhana” videos on YouTube. But the 48-year-old, who co-founded DC Shoes before turning his attention to motorsports in the early 2000s, also devotes a huge amount of his attention to World Rallycross racing. This year, he’s competing in the new Ford Focus RS RX rallycross car for his team, Hoonigan Racing Division, alongside Andreas Bakkerud, a 24-year-old prodigy from Norway. At the Canadian stage of this year’s World Rallycross championship, I sat down with Block to find out what makes the tire-slayer tick.

Motor1: What is it you love so much about rallycross?

Ken Block: I mean, I love the tracks, I love the high level of competition, and just the cars that we’re running now. It’s the highest level that these [cars] have really been built at, so it continues to get better and better. In general I really enjoy it, though this year’s been a bit of a struggle, being a development year, but other than that, getting these cars up to speed and learning these tracks has been really fun.

Motor1: How does the new Focus RS RX feel compared to the old car?

KB: This car feels not like a rally car. So my Fiesta, because it was based on the World Rally car, drove like a rally car. This car drives a bit more like a circuit, tarmac car. So you need to lean on the whole side of the car and get grip, as opposed to if you watch Petter [Solberg, who races a Citroen DS3 rally car] he uses the rear end of the car a lot more and gets grip. So that’s kind of the style I’m used to, so I’m having to completely adjust my driving style and learn how to make this one quick. 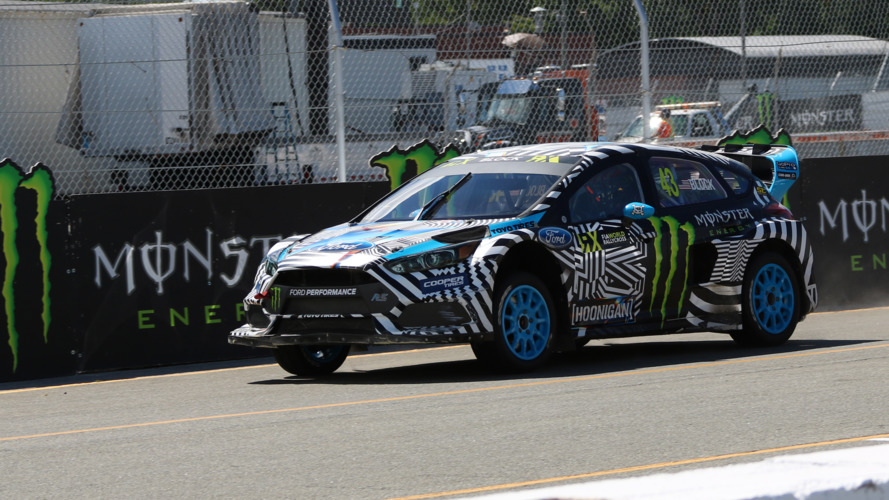 Motor1: Because you like that drifty, more exciting driving style traditionally.

KB: Yeah, for us we call it kind of like “committed,” sort of backing the car in and using the rear of the car for grip, and that’s just really a lot slower with this car. It looks like we’re driving a lot smoother with this car, it’s because that’s how this car goes fast. So it’s quite a change for me.

Motor1: Do you prefer the dirt or the paved sections of the tracks?

KB: I prefer dirt just because that’s where most of my career has been. But I enjoy the tarmac, I enjoy both. It’s fun learning what’s quickest on both surfaces, but I’m most comfortable really on the loose stuff, and there’s been certain GRC [Global Rallycross] races where I’ve completely dominated because it’s mostly dirt, but now it’s a completely different ballgame with this car, it’s not a rally car. Our car struggles a little bit, if you watch some of the rally-type cars, they’re handling the dirt a little bit better, but we’re a little bit better on the tarmac.

KB: Some of the past couple of races, like Norway and Sweden, were more tarmac and more commitment on tarmac, and our car was better that way. That’s the thing about these championships, though, you can’t have a car that’s perfect on every track. They vary so much, from the amount of dirt to tarmac, and from how tight the corners are. The last two tracks favored us, and that’s why Andreas was able to win [in Sweden on July 3]. This one I think with the amount of gravel, we’re not quite as quick as, say, Petter here. It’s that give and take, it’s a season to try and win, not just one race. 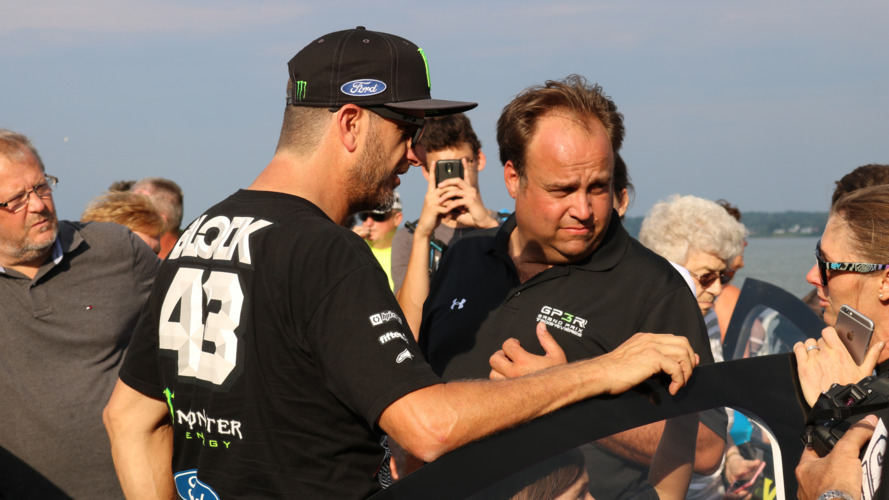 Motor1: What’s your sense of how popular rallycross is in the United States? Are people into it or is it more of a European thing still?

KB: It seems to be quite popular on a fan scale, but as far as finding the right event that can bring out the fans that it does in Europe … First of all, we don’t even have a track in America, and even this [the Canadian track near Montreal] is a rallycross track thrown into a horse track. Really, we don’t have anything that compares. I was over in Norway and Sweden for a while a couple months ago and even just in their test tracks, they’re better than any track that we have in America for rallycross. It’s really unfortunate that we don’t have any of the facilities, even for teams to test in America. Hopefully in the long run we can have something in a major metropolis where teams can come out to test and practice and develop the grassroots scene, and it would be a top-level facility for us to race on.

The Scandinavians have taken it a bit for granted because they have so many [tracks]. The Norway World Rallycross track and the Sweden one are the two of the best in the world – and that’s only one of several that they have, they actually have multiples of them. I think that over time hopefully in America we can develop some tracks, and that’ll help develop more of a scene. But until then, if you look right now … out of the top eight [drivers], you’ve only got a couple that aren’t Scandinavian.

Motor1: But that makes sense, if there’s nowhere to practice in the U.S., there won’t be as much awareness.

KB: It’s been one of the biggest struggles. There’s actually a better stage rally scene than a rallycross scene, even though nowadays rallycross is the one that’s growing faster.

Motor1: So how do you try to tell people why they should be more excited about rallycross?

KB: The biggest thing to me is the format of racing. The generations that are coming up on these things [points to smartphone] and used to the internet. When I grew up, I liked rally but I couldn’t watch rally on TV, I had no way to watch it. Today if you want rally all you gotta do is go to Google or go to YouTube and you can see whatever you want … Today’s consumer wants this information in a different way than they did in the past and rallycross fits right into that … A lot of other motorsports, from Formula 1 to NASCAR, it’s an hour and a half to three hours of just one race. [Rallycross], to me, fits into the way consumers want to be fed information and races: It’s short spurts of really good racing, and then it stops and there’s a cumulative amount of racing that builds into a semi-final and a final. You get to watch lots of little races, lots of little bits of information, that come through on the phone or on the computer … If you watch the highlight reels that World Rallycross puts up, they put up like four minutes and it covers two heats, but in those two heats you get to see the highlights of eight different little races that are happening. It’s a lot of little bits of action that happen that make it a cool motorsport for people to absorb in a new way.

My dad loved baseball, and I have friends that love NASCAR. I can’t watch three hours of baseball, it’s too slow for me. And I think that’s why some of these sports over time either need to change or they’re going to suffer like baseball is now … People just don’t want to go to 160 games for three hours at a time. 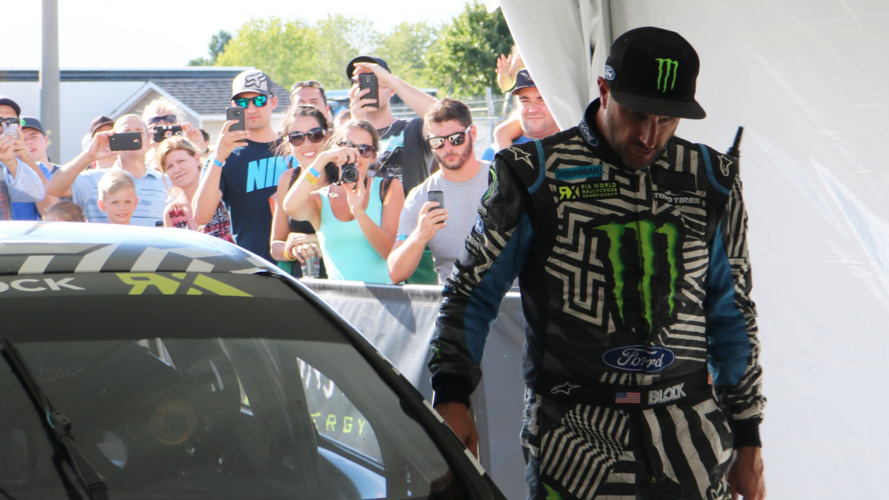 Motor1: How does it help that these cars are reasonably close to production cars?

KB: I think that’s always been the great thing about rally from years back and now rallycross. The Focus RS that you can buy isn’t so dissimilar from the shape and body of this one … Of course ours is a race caliber, but still, you can’t go buy a Formula 1 car on any sort of showroom floor. Even a supercar isn’t a Formula 1 car. I think that’s the big difference between a lot of the racing that’s out there and what rally and rallycross is. I think that’s what I’ve always enjoyed about it most is that I can see this production car and then see the race car next to it, and they’re very similar in the look and the things that they do.

Motor1: Do you think that attracts spectators – a guy who already likes the Ford Focus RS is going to be more interested in the racing?

KB: I think it’s more relatable. I like Formula 1, to me it’s an art form, but I can’t relate to that. It’s a beautiful piece of engineering, but the companies behind it and the thing itself are really something out of reach for most people. It’s very aspirational, but they can’t necessarily relate to it. That’s why I enjoy these things, because you can buy the Focus RS, you know? You can buy even the older generation race cars. You can buy an RS200 from the Group B era and drive it on the street. You can’t do that with a lot of other forms of motorsports. 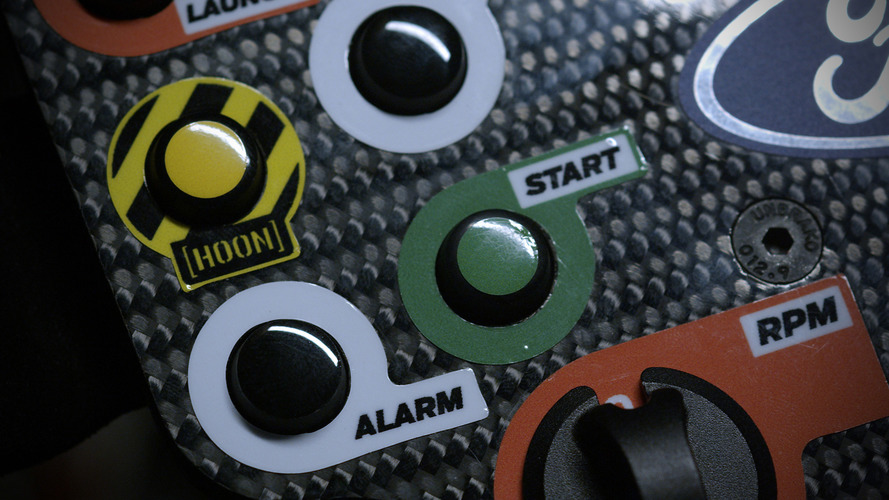 Motor1: In some photos online of your Focus RS RX, there’s a yellow button marked “Hoon.” What does it do?

KB: [Laughs] It doesn’t do anything. They just ended up with a few too many buttons.