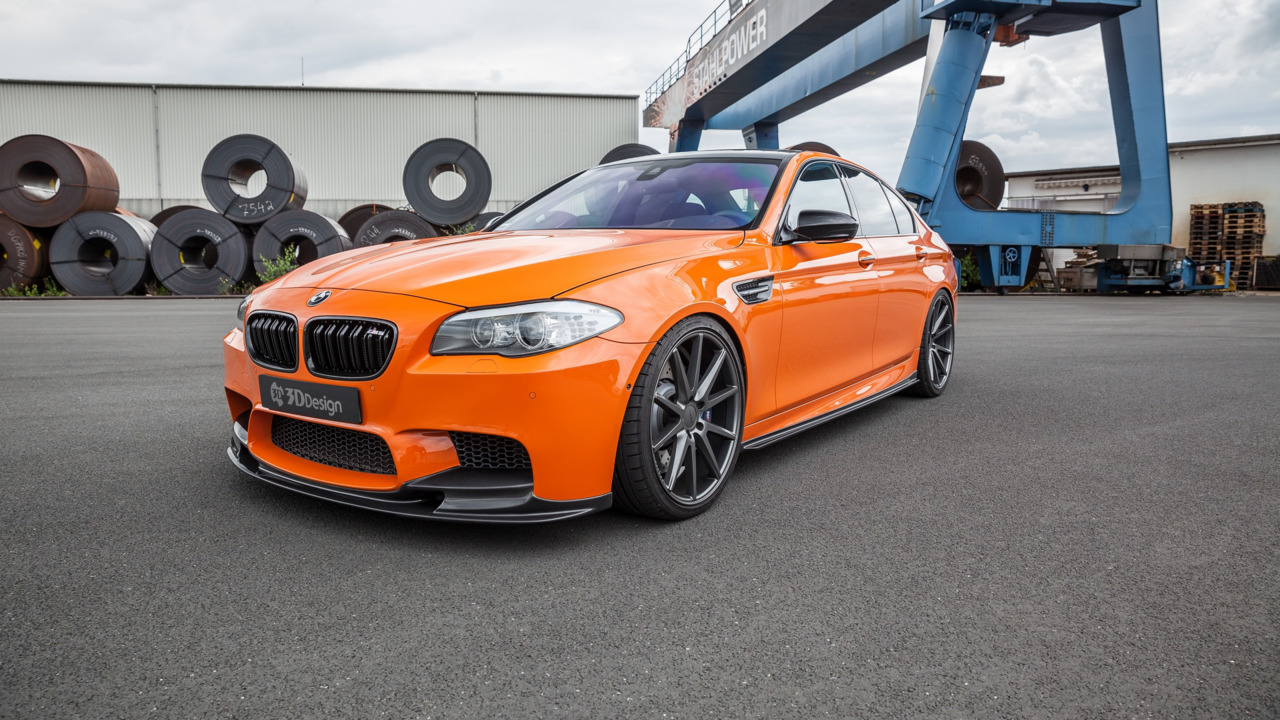 Spy photos have shown BMW is hard at work preparing the next installment of its reputable M5, but tuners are still finding ways to spice up the outgoing version. The latest example comes from Dortmund where Carbonfiber Dynamics has applied a subtle yet effective body kit developed by the Japanese aftermarket specialists at 3DDesign. The package consists of a custom front lip, side sills, rear diffuser, and rear spoiler - all of which are made from carbon fiber to keep the weight low. Overall, the high-performance midsize sedan doesn’t look all that different compared to a stock M5, thus proving once again that less is indeed more.

Wearing a Fire Orange paint in the same vein as the M3 GTS from the E92 generation, the modified M5 rides on 21-inch Vossen wheels which blend nicely with the other exterior modifications. Carbonfiber Dynamics mentions all of the styling upgrades created by 3DDesign can also be had on the M4 and M6.

It wouldn’t be a complete tuning job without some changes underneath the hood. In this particular case, the biturbo 4.4-liter V8 has been upgraded to a massive 818 horsepower (610 kilowatts), so it’s way stronger than those recent special editions such as the Competition Edition and Pure Metal which are both rated at 600 hp (441 kW).

If you would rather see the all-new M5, you will have to wait until at least the end of 2017 / early 2018 taking into account the regular 5-Series is set to go official in January next year at the North American International Auto Show in Detroit.

CARBONFIBER DYNAMICS SHOWCASES A THRILLING BMW M5 BY 3DDESIGN
Carbonfiber Dynamics in Dortmund is by now Europe's largest distributor of extraordinary carbon parts. With their latest project - a BMW F10 M5 – they are presenting the highest stage of evolution in the area of carbon-fiber technology. The carbon package consists of a front lip, side sills, diffuser and a spoiler created by the inimitable pen of 3DDesign in Japan. 3DDesign is very well known as the ultimate BMW experts from the land of the rising sun. Their advanced level of individual design and expertise of carbon-fiber components is highly acknowledged.
Perfection and precision are the top priority of 3DDesign. This makes them a perfect match for the philosophy of Carbonfiber Dynamics. The TÜV certification - especially issued for this particular 3DDesign kit – just emphasizes the critical standard towards exceptional quality, fitting accuracy and safety.

Equipped with 21 inch luxury rims by Vossen and a special finish called Fire Orange (GTS color of the E92) makes the M5 already a striking phenomenon. Even the engine – truly a mighty beast in its original version - had to endure some modifications. Accompanied by a sporty and electrifying sound a staggering 830 PS/818 HP (= 610 kW) are now available for pure enjoyment.
The exhaust system as well as the downpipes have been modified and the twin-turbo received an upgrade as well. The result is beyond impressive: the M5 requires approximately 10 seconds in order to launch from starting position to 200 km/h. Most of the lion's share of the 10 seconds acceleration from 100km/h to 200 km/h takes 6,6 seconds.

An important comment on this project: the carbon package by 3DDesign – with TÜV part certificates - is available for the M4 as well as for the M6.