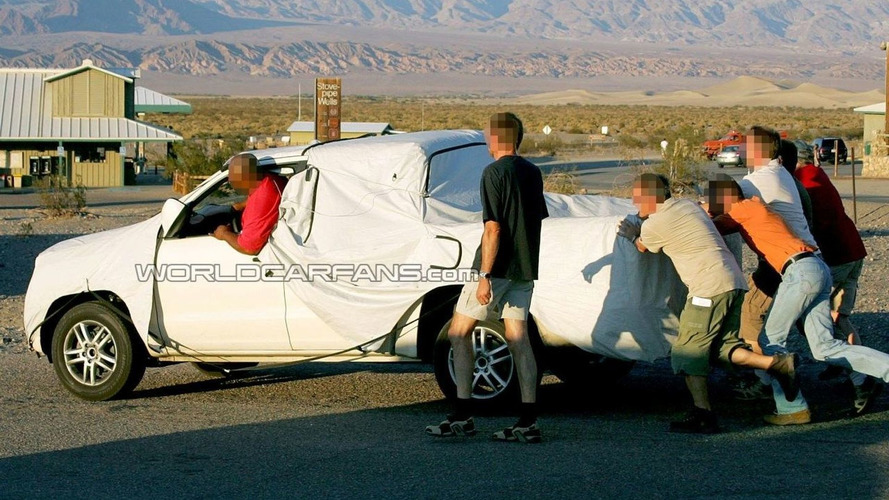 While undergoing highspeed tests on a ride through the desert in Mexico, the prototype’s engine suddenly died and the driver was unable to revive it.

There’s apparently still a long way to go for Volkswagen to make their new Pick-Up as reliable as its name suggests. While the marketing people have just revealed the Robust concept, engineers over in the U.S. are still fighting with the production model’s mechanics: While undergoing high speed tests on a ride through the desert in Mexico, the prototype’s engine suddenly died and the driver was unable to revive it.

Noticing our photographer was around, the engineers covered the prototype with a second cover (although it was already wearing bras front and rear), usually being used for cars parked or transported on a truck. Equipped like this, the testers let the prototype run down a mountain road for at least 10 kilometres and with the engine still cut off . When the road got too flat, a VW Crafter was driving behind the Robust and pushed the vehicle – bumper to bumper – to the next village .

After arrival there, the Pick-Up was covered completely and the ballast on the car’s load space was thrown out . Finally, the Robust was pushed into a truck by six people.

The funny part: The testers were accompanied by a photo- and film-crew that had planed to shoot a nice feature of the car’s heavy test programme. Well, boys, maybe tomorrow ...