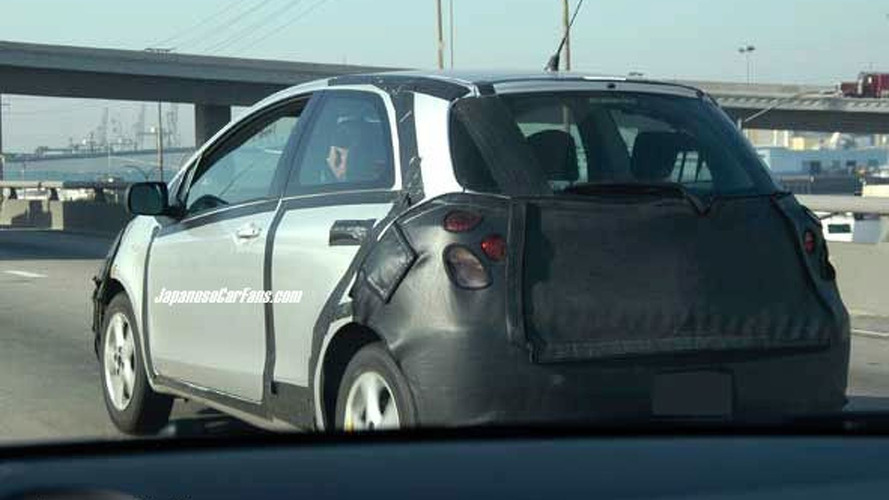 The Toyota Vitz recently released for the Japanese market is also known as the Yaris in Europe and the Echo in North America and Oceania.

In North America particularly Canada the new Toyota Echo will actually be the same as the Vitz except for left hand drive.  Same goes for the European Yaris despite Toyota commenting that only the platform will be shared for all three models, meaning there will be some styling differences on the Yaris/Echo hatchback clones. Probably so, but only cosmetic.

In addition to the 5 Door Yaris these latest spy photos captured in the US also show the 3-door model which has been previously unseen.  Toyota attempted to disguise this model as a 5-door by taping a faux door handle and a C-pillar body line.  But the giveaway is the fixed quarter panel glass.

With the introduction of the new Toyota Aygo the new Yaris is now able to go up higher in the segment.  Expect prices to be higher and as well as larger dimensions.

Rear seats fold flat for more space and engines remain the same as current car.  Sales for the 1.0 liter, 1.3 liter gasoline and 1.4 liter D-4D diesel should begin in the fall for Europe. Expect more options than offered before.

Sales in Canada also will begin this fall as a 2006 model year car. No word yet if the Echo will be replaced or even if the hatchback will be offered in the US since recent sales have practically disappeared.