Jeep Heaven turns up in Georgia 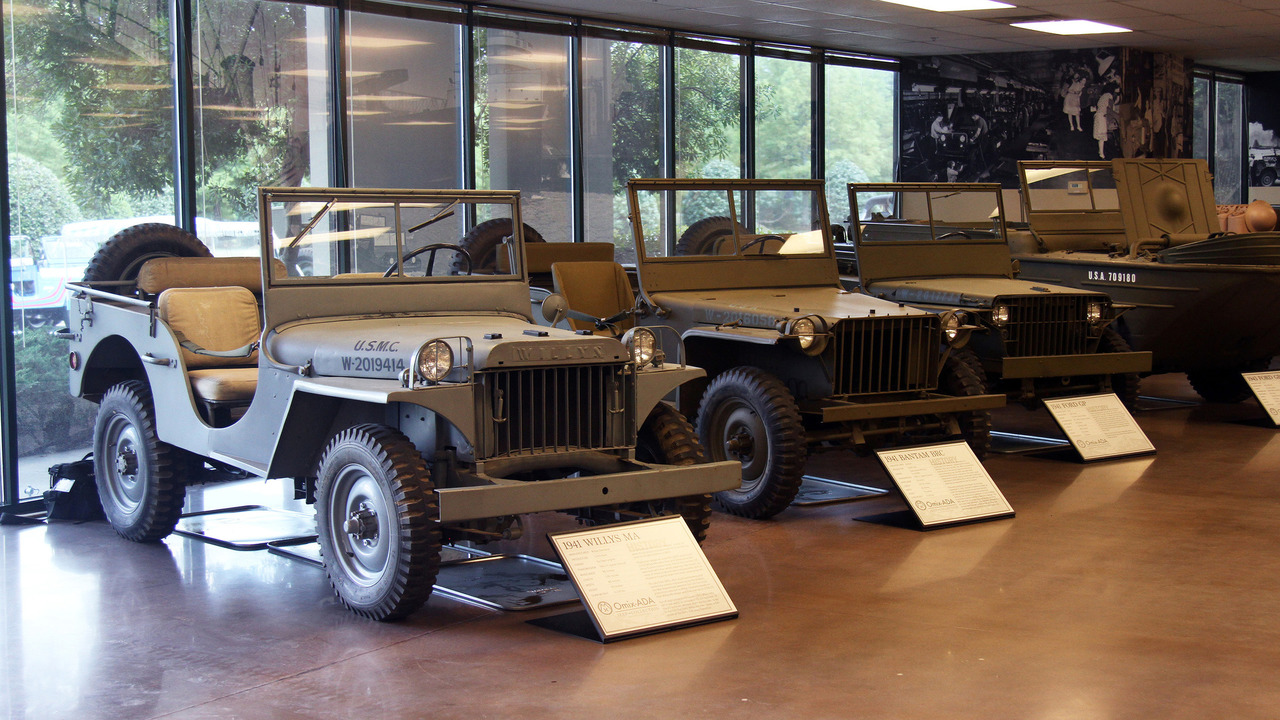 The Jeep Collection taught us 75 years of history and the correct pronunciation of "Willy's.”

Eleven months from now I’ll have four wheels pointed at a grandiose and pretentious quest. It begins when I place the two back wheels of my Toyota Land Cruiser in the polar waters of the Beaufort Sea off the coast of Prudhoe Bay, Alaska. It ends when I place the Cruiser’s two front wheels in the surf off the coast of Tierra del Fuego – specifically, in the Argentine city of Bahia Thetis, not far from where the Beagle Channel mingles the antipodal waters of the Atlantic and Pacific Oceans.

I don’t know how long it will take to traverse the Americas, but I do know I need to learn a few basics about making the trip.

Preparations began with a jaunt to Suwanee (sue-WAH-nee), Georgia, about 45 minutes northeast of Atlanta. My sole intent was to get lessons in trail driving from Dave Logan, a former global off-road driving instructor who’s been a Mentor in the Muck to skill sets ranging from oil exploration engineers to U.S. Special Forces.

If you want to prove you know what you’re talking about, then get this straight right now: proper pronunciation of “Willys” is Will-iss, not Will-eees.

Something funny happened on the way to the trailhead, though: I got waylaid by the vintage Jeeps at Logan’s current workplace, the you-name-it-we-got-it Jeep parts purveyor Omix-ADA. Omix started as a Jeep replacement component supplier for Europe and the Middle East in 1992. The company has since divided into three operations serving every epoch of America’s first and favorite general purpose vehicle: Omix-ADA handles vintage Jeep restoration, repair, and parts, Rugged Ridge designs and manufactures a glut of non-drivetrain accessories, and Alloy USA makes performance drivetrain gear (axle shafts, gear sets, etc.). If you have an engine and frame, the men and women of Omix can provide just about everything else to build a Jeep around them. Among the huge range of Rugged Ridge accessories that seven in-house engineers develop and test, the company warehouse contains goods as varied as tubs for a 1948 Willys, a new-old stock 4.0-liter inline-six, and 278 stamped body sides for the 1984-186 Cherokee that the company bought from a shuttered Malaysian Chrysler plant. When we asked Omix marketing honcho Henk Van Dongen why he was storehousing a giant Jeep flea market of parts, he said, “Someday someone’s going to need them.”

Back to that vintage gear – Al, the company’s urbane, affable owner, is the first to admit his interest is business, not Jeeps. Nevertheless, in spite of his commercial predilections Al picked up the habit of buying historic Willys and Jeeps, so The Jeep Collection museum at Omix headquarters, open to the public, houses a small kaleidoscopic collection of steel treats. This being the 75th anniversary of the Uncle Sam of four-wheel drives, we thought it fitting to admire the stepping-stone models that got us from the 1941 American Bantam BRC to the present JK-series Wrangler.

The original Willys MB was so rock-bottom loutish that Fred Flinstone would have gone on strike if Hanna-Barbera animators had tried to make him drive one.

Logan opened up the amusement park, rolling out six museum pieces for short drives: a 1945 Willys MB, the 1960 Willys DJ-3A Surrey, a 1955 CJ-5, a 1964 Willys CJ-3B, a 1973 Jeep CJ-5 Super Jeep, and a 1986 Jeep CJ-7. Sampling them in chronological order, the overwhelming impression was how far each generation advanced. One reason for that takeaway is that the source material was as primitive as a cockroach, so the designers had nearly infinite room for progress. The original Willys MB was so rock-bottom loutish that Fred Flinstone would have gone on strike if Hanna-Barbera animators had tried to make him drive one. It’s not like Fred would have fit, though; I’m not small but I’m no Fred Flinstone, and the 1945 Willys’ 17-inch steering wheel dug into my thighs. Meanwhile, the pedals were so close and upright that – unable to lift my legs – I could barely get my feet above them. I had my knees in separate time zones trying to get my quads out from under the wheel and get the Willys back to the museum without hitting a tree. Only after extruding myself from the cockpit did I realize I’ve never seen a fat dude driving a Willys.

The other reason every succeeding model (except for the Surrey) felt decades removed from the previous model is that that’s exactly what happened – Jeeps had long lifespans. Kaiser built the CJ-3B from 1953 to 1968 and the CJ-5 from 1954 to 1983, so each new model represented a new era in vehicle making. By the time I got to the CJ-7 and its four-speed automatic – a bum-fighter in any other company – I was almost too embarrassed to flaunt such luxury on public streets.

Eventually I did get around to sponging up everything Logan could tell me about good off-roading while manhandling a Wrangler on 37s through wet Georgia red clay. But before I tell that story, check out the pictures below for details on a few of the noteworthy museum pieces, and more on Rugged Ridge. If you’re a Jeep aficionado and happen to be in Suwanee, the museum is open Monday to Friday by appointment. In case rural Georgia’s a bridge – or a few states – too far, you can check out Rugged Ridge at SEMA, where it will showcase a truckload of Willys’ and Wranglers from 1941 to 2017.

If you want to prove you know what you’re talking about when you see them, then get this straight right now: proper pronunciation of “Willys” is Will-iss, not Will-eees.

These three getabouts in the Omix-ADA Jeep Collection are where it all began. In 1940 the US government’s Quartermaster Corps (QMC) sent a proposal to 135 car companies around the world – nearly all the car companies in existence – looking for a light reconnaissance vehicle. The QMC mandated unrealistic specs, so only two companies replied: American Bantam and Willy’s. Bantam won the competition with its BRC, the Bantam Reconnaissance Car. The government considered Bantam too small and financially unsound to fill the contract, so the government gave Willys and Ford the Bantam design and enlisted all three companies to build it. Omix-ADA is one of the few organizations in the world to house three original Jeep prototypes from the three companies: the 1941 Willys MA in the foreground, the 1941 Bantam BRC in the middle, and the 1941 Ford GP on the end.

Willys only built 1,550 units of the 1941 Willys MA prototype, giving it the smallest production run of the three prototypes, and there are only 45 known examples left in the world. The MA took design cues from both the Bantam BRC and Ford GP, and became the basis for two vehicles: the standardized-for-war Willys MB that would evolve into the Jeep, and a quarter-ton truck. The heaviest of the three prototypes, it had the most powerful engine, a fact that helped it become the de facto war vehicle: a 134-cubic-inch Go Devil “L-head” four-cylinder with 60 horsepower and 105 pound-feet of torque.

The 1941 Bantam BRC is the third generation of the vehicles originally submitted for the government competition, after the Bantam Pilot and the BRC-60. The War Department chose this as the winner, this is said to be the first vehicle to be called “Jeep,” (which this 1943 documentary says came from the initials “GP,” for General Purpose vehicle, but that’s likely not true), and the first model of the three to enter combat duty. The least expensive of the two original submissions, Bantam charged $739 for it when the average passenger car cost around $900.

Henry Ford had to be convinced to join the contest to build the new light recon vehicle (and Ford of Europe was already building trucks for the Nazis). The Blue Oval finally entered the race with this 1941 Ford GP, the second prototype Henry’s company submitted after the original Pygmy. (G stood for government, P denoted an 80-inch wheelbase recon car; GP was not an acronym for “General Purpose” nor “Government Pygmy”). The GP used an underpowered 120-cubic-inch four-cylinder engine derived from a tractor motor, with 45 hp and 84 lb-ft.

This 1942 Willys MB represents the standard-spec model of the wartime Jeep. Bantam, which had won the contract and provided the template for everything that followed, didn’t have the government savvy and clout to compete with Willys and Ford. By 1942 the government relegated Bantam to building trailers, plane parts, and torpedo motors. Willys built the MB from 1941 to 1945 (and Ford built the GPW – the W denoting the licensed Willys design), cranking out a total of 361,339 units.

The 1952 Willys M38-A1 introduced the amphibian-esque Jeep face and rounded fenders, the high rounded hood necessitated by switching to the Hurricane F-head engine. The 134-cubic-inch four-cylinder produced 72 hp and 114 lb-ft.

On this 1955 Willys CJ-5, the first year of the model. Willys didn’t make a CJ-4, so this represented the introduction of modern Jeep looks (if 1955 counts at modern). Put a roll bar on it and you’re looking at the next 30 years of Jeep design language.

Willys turned into Kaiser-Jeep in 1963, and in 1970 American Motors bought the company. Kaiser had been selling a convertible Jeepster Commando since 1966, developed to compete with the Ford Bronco and Toyota Land Cruiser. But the Jeepster Commando wasn’t selling so well anymore, and AMC wanted to take advantage of the muscle car craze with its new purchase, so AMC reworked the Jeepster into the Jeep Commando, and then completed development of this limited-run 1971 Jeep Commando Hurst Edition.

This 1973 Jeep CJ-5 “Super Jeep” is another rarity, with just 300 made. The popular Renegade had been on sale for three years, and for a moment in 1973 Jeep ran out of the aluminum Renegade wheels. Instead of simply not selling the Renegade until they could get new wheels, Jeep created this, the CJ-5 Super Jeep. Looking like a doll set accessory, the Super Jeep came in six colors, all with a vari-hued stripe package running from hood to tailgate, got curved chrome bumper in front, a two-tone interior, and eight-inch-wide steel wheels.

The JK-series Jeep Wrangler, introduced at the end of 2006, changed just about everything for Jeep. With the addition of a four-door model that outsold the two-door, JK Wrangler sales more than doubled those of the previous TJ series and continue to grow. The folks at Omix-ADA told us the JK Wrangler is the most accessorized vehicle on sale anywhere in the world because they change hands regularly, and every new owner “upgrades early and often.” Al, Omix’s owner, said “The JK is like Skittles – you can personalize it in any color,” and the repeat business is how Omix grew from 20 to 125 employees over the past ten years. This 2013 Wrangler, a Rugged Ridge promo loaded for bear – or enemies – with the company’s in-house accessories, is named Kilroy.

This one caught us by surprise, putting it mildly. The company’s experimenting with Lady Rugged Ridge accessories – Al’s wife owns this one – because Omix says women buy 55 percent of Wranglers. That’s a stat that, like a bright white Wrangler with hot pink accents, simply can’t be ignored. The next-generation JL Wrangler should expand the brand further, here and around the world. Until it appears next year, you can look back at more historic Jeep glory at the Jeep Collection site.