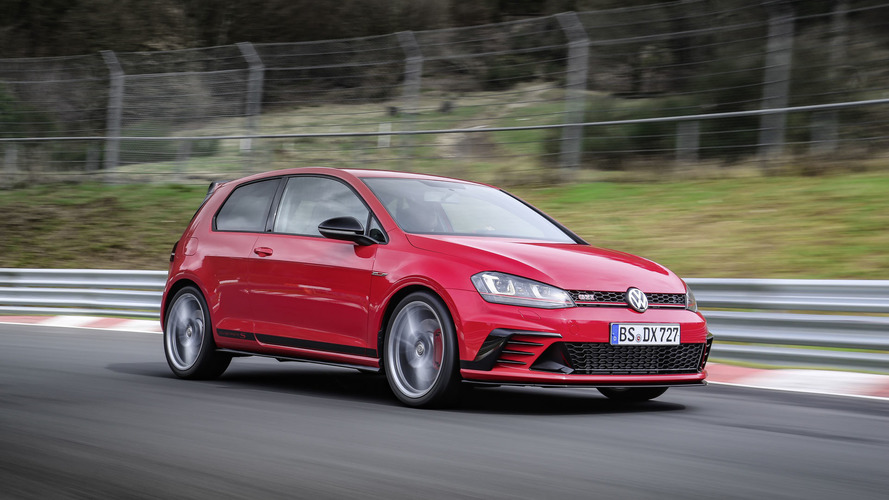 Brits bought all 150 cars in the blink of an eye.

VW is making only 400 units of its front-wheel-drive Nürburgring king and U.K. will be getting the lion’s share with 150 cars. The bad news is you can’t buy one anymore in the not-so-United Kingdom since the Golf GTI Clubsport S has already reached sold-out status in just three months after being officially revealed. It had a starting price of £33,995, thus making it significantly more expensive than another high-powered special edition, the GTI Clubsport Edition 40 available from £30,935 and limited to 1,000 examples.

While the “Edition 40” offers 265 horsepower from its turbocharged 2.0-liter engine, the Clubsport S ups the power ante to a mighty 310 hp, so it’s even stronger than the all-paw, 300-hp Golf R. The massive power bump over the regular GTIs has helped the range-topping version take down the ‘Ring record for a front-wheel-drive car by posting a lap time of 7 minutes and 49.21 seconds.

The ‘Ring performance was possible not only by increasing the engine’s output, but also by shaving off fat to enable a relatively impressive low weight of 1,285 kilograms (2,832 pounds). To do that, VW removed the rear seats, floor mats, parcel shelf, variable luggage compartment floor, hood damping, and also eliminated some of the insulation material.

For the same purpose, the Golf GTI Clubsport S comes exclusively with a manual gearbox which is obviously lighter than the DSG transmission available for the regular GTIs. It doesn’t even have air conditioning, but VW says buyers can add it as a no-cost option. However, doing so will increase the car’s weight by approximately 10 kg (22 lbs).

A special edition to celebrate the Golf GTI’s 40th anniversary, the Clubsport S will start reaching customers from early October.

Every single Golf GTI Clubsport S model allocated to the UK market has been sold on release of the new car.

Only 400 examples of the Golf GTI Clubsport S will be built, of which the lion’s share (150) will come to the UK – a country where the enduring popularity of the hot hatchback is unmatched anywhere else in the world.  Deliveries of these limited edition cars are expected to begin in early October.

The Clubsport S is the ultimate expression of the legendary Golf GTI.  The front-wheel-drive car’s 2.0-litre TSI engine packs 310 PS, enabling a blistering 7m 49.21 s record lap time around the gruelling Nürburgring Nordschleife back in May.

The Golf GTI Clubsport S is focused on outright performance.  It weighs 1,285 kg, resulting in a strong power-to-weight ratio of 4.15 kg/PS.  A revised fuel pump is only one example of how comprehensively this car has been evolved but of greater significance is the weight reduction compared with the Golf GTI on which this car is based.  Features such as an aluminium subframe on the front axle and aluminium brake covers illustrate the Wolfsburg engineers’ commitment to shedding the kilograms.

Continuing that theme, a smaller battery, along with the removal of components such as insulating material, the variable luggage compartment floor, the parcel shelf, floor mats and the bonnet damping have together pushed the weight tally down further.  Finally, fitting the car with a manual transmission and removing the rear seats completes the comprehensive weight-saving programme.

That weight reduction contributes to the incredible performance of the Golf GTI Clubsport S.  Standstill to 62 mph is reached in 5.8 seconds, and the top speed, where the law permits, is 164 mph.  It packs a torque figure of 380 Nm between 1,850 and 5,700 rpm, with maximum power available between 5,800 and 6,500 rpm.

To transfer this performance to the road and track are four 235/35 ZR Michelin tyres, which are mounted on 19-inch ’Pretoria’ alloy wheels.  The handling of the car can be adjusted by the driver thanks to Dynamic Chassis Control (DCC). DCC makes it possible to achieve the optimum response to driving conditions.  Comfort, Normal and Race modes are available, as well as a special ‘Nürburgring’ option that further modifies the suspension, sound, engine and steering parameters.

The Golf GTI Clubsport S features race-derived heated bucket seats to connect driver and car.  The character of the Clubsport S engulfs the driver through sound as well as feel thanks to a new exhaust system.  The diameter ahead of the tailpipes is 65 mm instead of 55 mm, which reduces backpressure and increases performance.  The side effect is the atmospheric backfire produced when decelerating.

This very special Golf has a recommended retail price of £33,995 on-the-road.  Three colours are offered: ‘Tornado Red’, ‘Pure White’ and ‘Deep Black’.  Air conditioning is available as a no-cost option, its inclusion adding around 10 kg to the lightweight car.  CO2 emissions for the Clubsport S are 172 g/km and its economy on the combined cycle is 38.1 mpg*.

The Clubsport S joins the Clubsport Edition 40 in the GTI line-up – also a special edition to celebrate the GTI’s 40th birthday.  It boasts 265 PS – 45 PS more than the standard GTI – with an overboost function to take power up temporarily to 290 PS, and is priced from £30,935 RRP on-the road.  Both Clubsport versions of the Golf GTI share DNA with the successful Golf GTI TCR racing car that was launched at the start of the year.