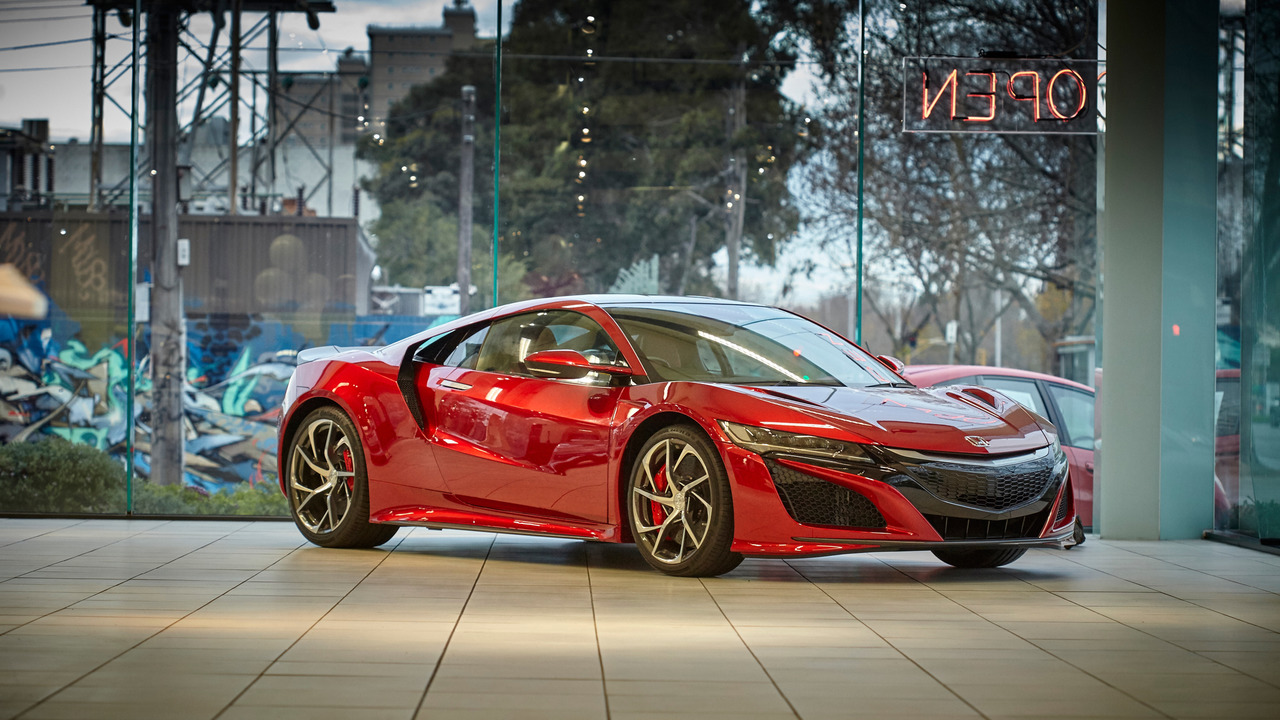 The second-generation NSX has arrived in the Land Down Under where it’s going to be sold with the Honda badge for a starting price of $420,000. Honda Australia Director, Mr. Stephen Collins, describes it as the “first hybrid supercar on Australian roads” and mentions it will be available at only five dealerships across the country. There’s only one NSX in Australia at the moment of writing, and it has already embarked upon a nation-wide tour to visit all five dealers until the middle of October to gauge customer interest.

Honda Australia will soon start accepting applications for people interested in buying the high-performance hybrid machine. That being said, some have already expressed their desire to buy the car and have contacted participating dealers to make deposits for the NSX after reading “positive reports about the Honda NSX in overseas publications.”

Buyers will get to pick from eight body paints, including three free-of-charge solid colors and three metallic ones that will each command an extra $1,500. The remaining two are “premium” hues developed using Andaro aerospace technology and available for a cool $10,000. The options list will be quite short because instead Honda Australia has decided to sell the 2017 NSX with most of the goodies offered as standard.

If you’re not a big fan of hybrids, NSX project boss Ted Klaus did admit recently in an interview a “more pure, simplified version” is a possibility, so maybe Honda/Acura will remove the electric stuff for a more focused edition of its supercar. There are also talks about a lightweight version and an open-top model, but we will have to wait and see whether these will actually become a reality.

Honda Australia has today announced pricing, key features and specifications for the cutting-edge hybrid Honda NSX supercar, ahead of its arrival into Australia.

Already establishing itself as a global halo performance car for the brand, Mr. Collins said five dedicated Honda NSX dealers in Australia would soon start accepting applications from prospective customers to buy one of the world’s most technologically advanced supercars.

“As a hybrid technological tour-de-force, the all-wheel drive Honda NSX challenges perceptions about what constitutes a supercar, just as the original did,” he said. “With an extraordinary breadth of ability, the Honda NSX offers scintillating track performance, along with unsurpassed everyday usability,” Mr. Collins said.

The Honda NSX will have a Recommended Retail Price (RRP^) of $420,000 and comes standard with almost all the options boxes ticked.

The car will be available in a range of eight exterior colours and combination of four high-quality interior trims. A choice of three solid exterior colours are available as standard, with three additional metallic colours available for $1,500. The Honda NSX also offers the latest in Andaro aerospace technology with two premium colours, including the hero Valencia Red Pearl, for an additional $10,000.

Mr. Collins said the Honda NSX would play an important role in Australia. “We’ve seen the renewed positive interest in Honda from the Australian public with the arrival of the HR-V and just-launched Civic,” he said. “The arrival of the Honda NSX is an important signal to our Australian customers that Honda is truly a technology and engineering company that can deliver not only efficient, well packaged small cars, people movers and SUVs, but also a high-performance hybrid supercar.”

Already, some Australian customers have been in contact with dealers and paid deposits for the Honda’s hybrid supercar, he said. “Many have read the positive reports about the Honda NSX in overseas publications and were prepared to put money down, without even driving it,” he said.

In Australia, only five Honda dealers will be able to sell the Honda NSX.

The five dealerships are:

Honda Australia already has one Honda NSX in the country to show prospective customers, which is currently undertaking a national ‘road-show’ so the five dealers can showcase the car until mid-October.

Mr. Collins said the widespread interest generated overseas by the appearance of the Honda NSX at the Goodwood Festival of Speed in the UK and the internationally known Pikes Peak race in the United States, had raised awareness of Honda’s newest supercar.

Because of its limited availability globally, the Honda NSX would remain a relatively rare car on Australia roads, he said. “It will be exclusive; so those customers who value such exclusivity will really appreciate the Honda NSX. It will be the must-have supercar in Australia among those owners who appreciate finely crafted automobiles.” In North America the car already has a two-year waiting list.

The Honda NSX arrives packed with luxury features and performance technology as standard, where many of its competitors must have high-cost options added to match it, Mr Collins said.

Foremost among the many innovations in the Honda NSX is Sport Hybrid Super Handling All Wheel Drive (Sport Hybrid SH-AWD), a first-of-its-kind technology in the supercar arena. By combining this new interpretation of Honda Super Handling performance with innovative approaches to vehicle design – including advanced body construction, component packaging and aerodynamic optimisation – the Honda NSX faithfully translates the acceleration, steering and braking inputs of the driver with incredible fidelity and with instant response. It amplifies the capabilities of every driver, and greatly elevates the dynamic experience in every driving situation.

Powering the Honda NSX is the most intuitive and advanced sports hybrid power unit in the supercar segment. At the heart of the new Sport Hybrid power unit is a bespoke, mid-mounted twin-turbocharged V6 engine, paired with an all new nine-speed dual clutch transmission (9DCT) and Direct Drive Motor that supplements the engine with instant torque response. Together, these components comprise the rear power unit.

By creating a propulsion system that makes use of both mechanical and hybrid-electric components rather than just a conventional petrol-powered internal combustion engine, the Honda NSX’s power unit is able to create constant and linear acceleration at any point in the power band, at any speed with instant response.

At initial launch from a standstill, the front-mounted Twin Motor Unit (TMU) and the direct-drive electric motor are able to immediately supplement power production from the twin-turbocharged V6 engine, using the abundant and instantaneous torque production that is an inherent characteristic of electric motors.

Conversely, once the vehicle has reached a steady cruising speed, the twin-turbocharged V6 engine becomes the primary motive force for the vehicle, with the three electric motors providing supplementary power and yaw control when necessary.