2018 Acura TLX shows a new face in the desert 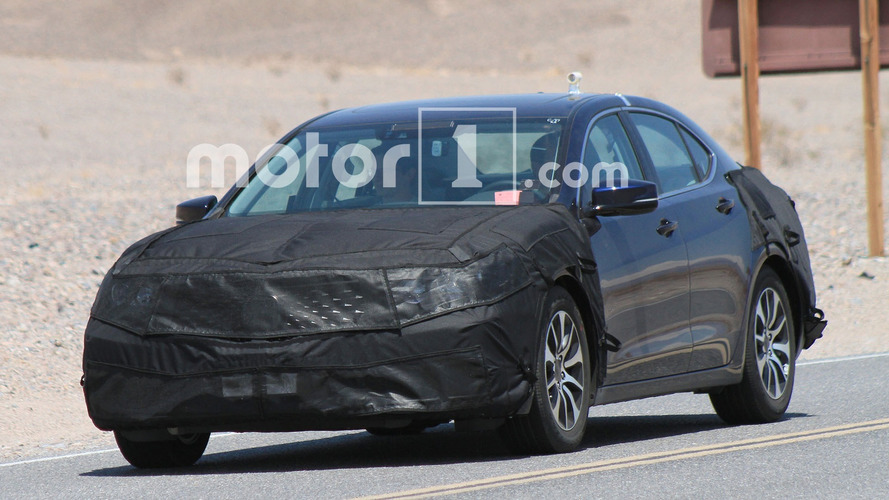 It should arrive next year.

Acura is prepping an update for the TLX, and new spy shots catch a heavily camouflaged example doing hot-weather testing.

This TLX’s body covering is quite effective at hiding many of the changes, but a few of them are easy to spot. For example, the sedan now wears a mesh grille with the brand emblem in the center instead of the current silver shield. The new design element takes clear inspiration from the Acura Precision Concept. The headlights also appear larger than the narrow Jewel Eye LEDS on the present model. The camouflage at the back does an even better job of obscuring the updates, but tweaked taillights seem to be among the upgrades. We don’t know anything about interior improvements yet, but the usual work on the driver tech and material quality is likely.

The 2018 TLX probably continues to use a 2.4-liter four-cylinder and a 3.5-liter V6. Acura might tweak the powerplants’ output and fuel efficiency, though. Another possibility is the addition of a hybrid model. For example, the refreshed 2017 MDX received a 3.0-liter V6 with three electric motors that has a total output of 325 horsepower.

Acura unveiled the current TLX as a barely disguised concept at the 2014 North American International Auto Show. The company positioned the model has a replacement for both the TSX and larger TL in its lineup.