Was the O.J. Simpson Trial to Blame for the Demise of the Ford Bronco? 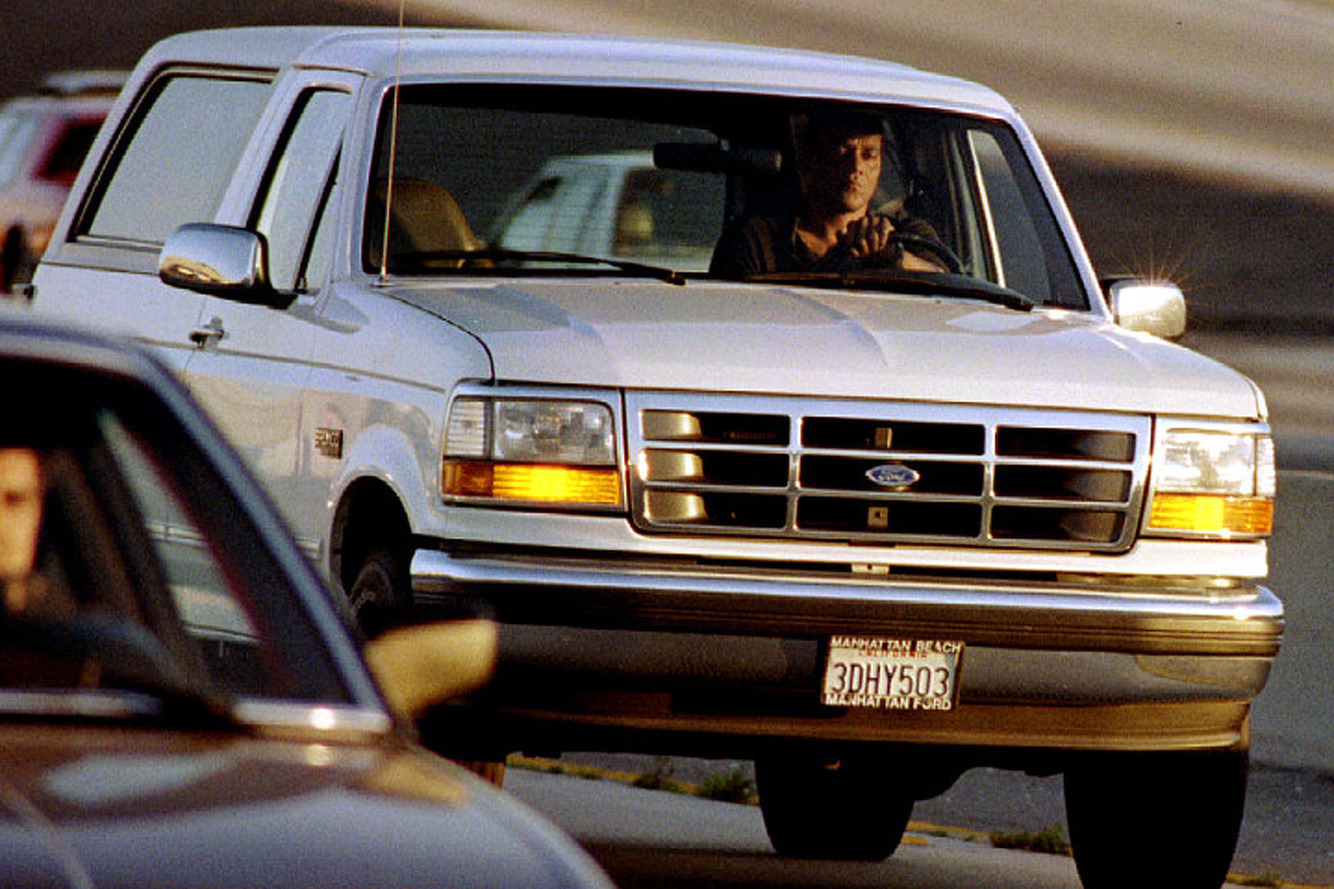 If anything, the exposure from the Simpson chase may have given the Bronco a sales boost.

Earlier this week, The People v. O.J. Simpson: American Crime Story aired to critical acclaim. It is shaping up to be one of the more talked-about series going into 2016 as we get a glimpse of the "Trial of the Century" which has not yet been seen. And we get to see contemporary actors go through all the most memorable moments of the case. It calls to mind one of the most iconic parts of the case- the White Ford Bronco.

The Ford Bronco had been around since 1966, starting life as a plucky, short wheelbase, 2-door SUV. It was a fun go-anywhere personal camping vehicle, and people responded, with sales of the first-generation model (pictured below) topping out at 26,300 in 1973– not bad for a niche vehicle.

But as SUVs grew more mainstream (thanks, in-part, to the popularity of the Bronco), their actual size did too. Vehicles like the International Scout II coming on the scene in 1971 and Dodge Ramcharger arriving in 1974. They were larger and had more creature comforts, and to respond, Ford unleashed a bigger Bronco in 1978. It was based on the Ford F100 chassis and only lasted two years, giving way to the 1980 model. Also based on the F-Series, the '80 would be the foundation of the Bronco everyone would know and love. Through the 1980s, Bronco sales cruised. Between 1985 and 1989, sales rose from 52,281 to a high of 62,563. Following a steep drop in 1990 and 1991, which saw sales fall to nearly 25,000, the Bronco was slowly starting to regain ground. Enter Orenthal James Simpson.

On June 13, 1994, at 12:10am, Nicole Brown Simpson and Ron Goldman were found murdered outside Brown’s Brentwood condo. An investigation found evidence that led the LAPD to suspect that O.J. Simpson was behind the murders. O.J. was a well known former athlete that even found his way on to movies. His high profile and status allowed his lawyers to convince the LAPD that he would turn himself in by 11am on June 17, 1994. But 11am came and went, and with a thousand reporters waiting to get a look at O.J. entering the station, the LAPD issued an all-points bulletin at 2pm. At 5pm, one of Simpson’s lawyers, Rob Kardashian, read a note to the press that sounded a bit like a suicide letter. Soon after, his defense lawyer, Robert Shapiro, made a public plea on television, asking Simpson to surrender. The media circus was well underway.

It wasn’t until after 6pm that someone in Orange County noticed Simpson riding in the white 1993 Ford Bronco, and called the police. But Simpson wasn’t driving– longtime friend Al Cowlings was at the wheel (it was Cowlings’ Bronco, not Simpson’s). Police then started to track Simpson’s cell phone to try and get a location. An officer located the Bronco at 6:45pm. It was on Interstate 405, heading northbound. When the officer approached the vehicle at speed, Cowlings yelled over the sirens that Simpson was in the back seat, with a gun to his friend’s head. The officer backed off, and the now-infamous low-speed chase ensued:

One of the more interesting aspects of the coverage that day was many people were tuned into Game 5 of the NBA Finals. They aired both the game and the chase, going for the then-cutting-edge screen-in-screen.

There were some insane things that happened during that chase. For one thing, Domino’s claimed that “record sales” were made during the chase. Also, Peter Jennings got pranked by an apparent Howard Stern fan on live television:

Cowlings drove Simpson to his home in Brentwood, and finally parked, where O.J. eventually went inside. A SWAT team spread out around the property, waiting for Simpson to make a wrong move. He was in the house for about 45 minutes before he surrendered. The “Trial of the Century” was still to come, but the role of the Bronco came to a close. In the Bronco, police found $8,750 in cash, a fake beard and mustache, a passport, and a loaded .357 Magnum. But did the infamous chase mean the beginning of the end for the Bronco? Not like you might think. Sales of two-door SUVs were on the decline in the mid 1990s, as automakers were turning to more versatile four-door SUVs. Chevy made the four-door Tahoe along with the 2-door Blazer, and the Ford Explorer sales were soaring. The full-size, four-door Ford Expedition would arrive in 1996, and the Bronco would be phased out that same year.

If anything, the exposure from the Simpson chase may have given the Bronco a sales boost. The final sales figure for 1994 was 37,367, which was a nearly 7,000-unit jump from the year before, and the best sales year of the vehicle’s final five-year stretch. The exposure probably helped, but the Bronco could not outrun the fact that more practical vehicles of the same size could be found in many dealerships. The Bronco run ended in 1996. But 20 years later, the trial is finally being dramatized on television, and there are Bronco rumors to boot. There are talks of a two-door 4x4 SUV in the works. Though we’ve taken them with a grain of salt, it hasn’t stopped us from speculating. We’ve also had a rendering commissioned:

It remains a piece of American pop history. When you say "white Ford Bronco," people instantly know the reference. We're not sure if that would help or hurt the revived Bronco. One thing we do know–If the Bronco were ever revived, we’re sure dealerships would have to deal with being repeatedly asked, “does it come in white?” Follow @GKenns101

The Bronco Is Back: