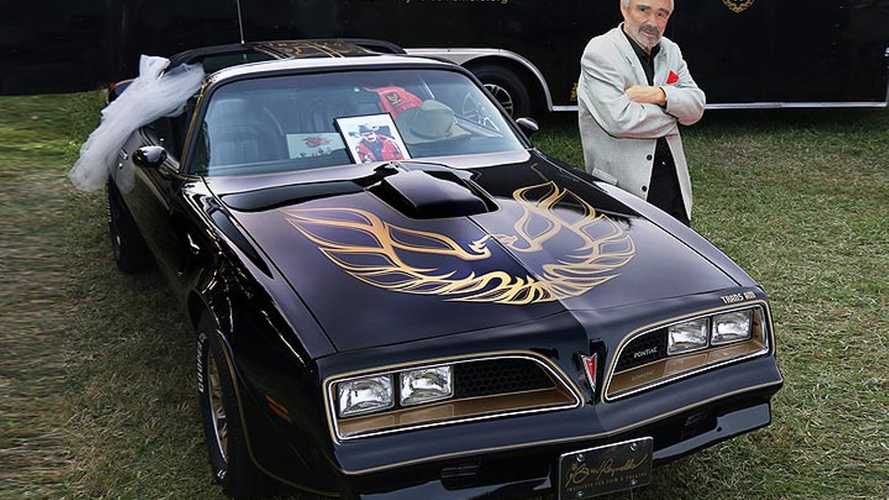 Mechanically speaking, the late ‘70s were not kind to the Pontiac Trans Am. In 1977, the most potent engine under the muscled-up Firebird corralled a worrisome 200 ponies. But the same can’t be said about the breed’s popularity. The Trans Am was arguably the automotive star of ’77, and that’s largely thanks to one unforgettable flick, Smokey and the Bandit.

This past weekend, one of the original Smokey and the Bandit Pontiac Trans Ams rolled across the Barrett-Jackson auction block in Scottsdale, Arizona, with none other than the bandit himself—Burt Reynolds—in the passenger seat. Amid much cheering, it went on to sell for an impressive $550,000, and it’s now headed for a new roost at the Cars of Dreams Museum in Palm Beach, Florida.

RELATED: See More Photos of the Smokey and the Bandit Pontiac Trans Am

If it looks a bit too clean to be a Hollywood stunt car… that’s because it is. According to the auction house, this Trans Am was a promotional car for the film, which was trucked around to different events in 1977—a rather more relaxed existence than being pursued on-set by Sheriff Buford T. Justice. Even so, the Firebird underwent an extensive “rotisserie” restoration to bring it back to like-new condition, and it’s said to still retain its original 400ci V8 and automatic transmission. While it wasn’t the quickest Pontiac Trans Am by a long shot, its silver screen appearance did prove wildly popular and Pontiac went on to sell 68,745 Trans Ams that year, marking its highest sales ever a year later in 1978. With sleek Special Edition looks, a “screaming chicken” decal, T-tops, and Burt Reynolds levels of cool… who could argue? RELATED: Is this Pro-Touring Pontiac Trans Am Better than the Original?

Included with the half-a-million-dollar Pontiac came an official plaque from General Motors, certification from Universal Studios, as well as a copy of the original scripts, film location maps, and behind-the-scenes photos. It wasn’t the only silver screen item to cross the auction block that day, however. Transformers director Michael Bay was also on hand to auction off a pair of Autobots—a Bumblebee ’67 Camaro and an Optimus Prime ’92 Peterbilt big rig, which sold for $167,200 and $121,000, respectively. RELATED: Check Out This Rare "Experimental" Pontiac Firebird Wagon Follow @thetirekicker